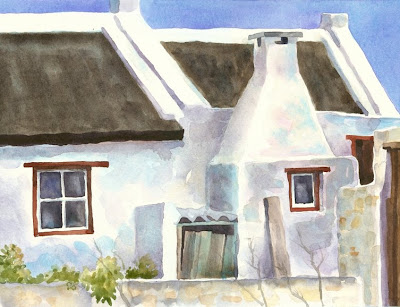 This is one of the fisherman's cottages at Arniston, where we holidayed - this old section is called Kassies Baai - and the whole place is a national monument, dating back 200 years, which for South Africa is a long history - I know it won't impress some of you ancients with 700+ year old architecture, but we are very proud of these humble little abodes! They look charmingly hand-crafted - uneven walls, rounded edges and softly moulded edifices. The people living there have inevitably embraced the modern world - electric power lines, cars, trailers and caravans now embellish the simple time-worn village - but the feeling lingers on...
I zoned in on the cottage above, trying to define the shapes of the white-washed walls with subtle variations of colour (which aren't so subtle after all) - a painting I've been thinking of doing for ages - it's a start, but I need to try it again... and again... (on Canson Not 24 x 32 cm) 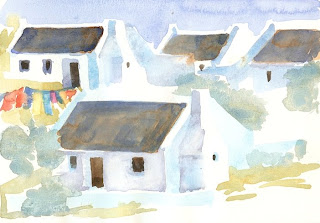 The little sketch on the right isn't finished, but it gives an impression of what the light is like there on a sunny day - glaringly bright, the whites of buildings and sand melding into each other, and everything sun-bleached and washed out.

Now listen, here's something exciting! I've been invited to be a correspondent on the Urban Sketchers blog!! I feel very honoured to be joining the amazing sketchers there from all over the world - and to be another of the rather scarce dots on the map of Africa. I'm going to have to get out more to keep the urban sketches flowing, but that's a good thing - I've been rather house-bound of late. My introduction will be on the 1st of February, I think, so come and visit there, wont you?
Posted by Cathy Gatland at 8:59 PM

I love the light in your little sketch, and the cottage is wonderful--I especially like how you broke up the sky; very interesting arrangement of shapes.
Congrats on joining the Urban Sketchers! Their blog is really wonderful, and you'll fit in perfectly! I adore your scenes of street life.

Your depiction of these ancient little homes is so intriquing and well done. And congratulations on your new honor! keep painting.

Well done Cathy on the Sketchers Forum - you'll do us Africans proud! And your painting of the cottage is just so Cape! Ja Nee Wonderlik!

I was trying to find a new way to represent these houses Laura - they have been done by so many artists and have unfortunately become a bit of a hackneyed theme:(
Thanks so much, and for all your support and encouragement in my various efforts - I value it greatly!

Sandy, thanks - from someone I consider a watercolour expert - another honour!

Congrats! Your work will be a wonderful addition. I have bookmarked the blog and am looking forward to seeing your work there !!!

"Kassies Baai" - I can just hear Granny Iris saying it - I remember her talking about all those places.
Your w/c's are beautiful - and congrats on the Urban Sketches correspondence - Wow! That is really exciting...

Thanks Sharon and Gillian - I've just seen that my intro is up over at Urban Sketchers already - whee! I'd better get out there and draw (tomorrow - it's 11 pm now)

I just saw your introduction and popped over to say congratulations! It will be great to see your lovely work over there too!

Thanks for coming over and your kind comment Felicity!

Lovely! They remind me of the whitewashed cottages of Ireland.

Really nice depictions of Arniston cottages. We had many wonderful weekends at Arniston. A friend owned a cottage there.
Jean

Teresa - hope I get to see the Irish ones one day!

Aren't we lucky to have friends there Jean? Hope it doesn't change too much - the developers are trying!