Bear with me while I work through some stuff out loud here... I've been wanting to draw more of the urban landscape in which I live, ie. the city and its structures, as well as the people - my main focus and the subject I'm naturally drawn to ('scuse the pun). But, frankly, sketching buildings is an ordeal, and am not very good at it, and trying to do so makes me irritable.
On Thursday, BFG (my husband, whose initials happen to be those, but who is in fact, quite Big, Friendly, and if not a Giant.... but I digress) and I went to the cricket match between Australia and South Africa at the Wanderers Stadium*. Thinking I'd combine watching the game with a sketching opportunity, I started off trying to draw the whole scene, with all the buildings and spectator's stands surrounding the field. I missed a lot of the cricket and had nothing but a rather bad scratchy drawing to show for it (and a bad scratchy attitude!)

So I abandoned that and sketched some of the people around us - mostly during the tea and lunch breaks - so I could watch some of the days play, and decided that that would do for my next Urban Sketchers posting. (see more here) 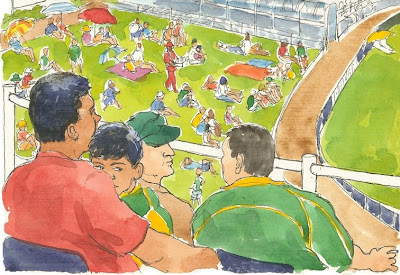 Today I thought I'd have another go at drawing the Bullring (*aka), purely with the aim of enjoying it. I've seen some glorious loose, joyful sketches on USk, such as this and this and thought that if I could get anywhere near that abandonment, I would enjoy at least the process, and possibly also the result. So I put down some reasonably accurate pencil guidelines, and then sloshed on some watercolours, dibbled some felt tip pens and white gel pen, and finished off with dip pen and Higgins black ink - and did in fact, very much enjoy the process - and "Viola!" (as my daughter used to say at six-ish) I am much happier with the result. I think I'm on my way to finding a method, though I can't schlepp all those materials around with me... 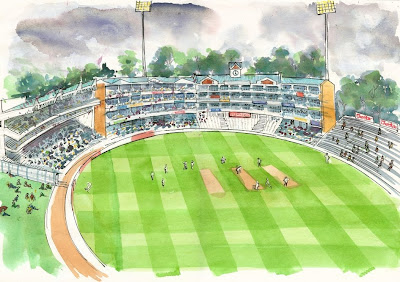 Posted by Cathy Gatland at 7:03 PM

I rather draw people than their environment but like yourself Usk is changing my way of looking and I'm starting to have a go at buildings and cars!! I find your sketches of the stadium very good and specially love the bottom one well done

a wonderful set of sketches! They are interesting in composition and in details/graphic elements and I think color on the top view of the field really works!

Hi Isabel - isn't it great to be challenged into new directions! I hope you never stop drawing your people though - love them!

Thanks Apple-Pine - on the bottom one I started with the colour, which seemed to help with the shapes, and to keep it loose

Cathy, I feel exactly the same way you and Isabel do---USk is very inspiring, isn't it? I'm very impressed with this set of sketches. What convincing rendering of deep space in that bottom one!

Oh Cathy you are making me so home sick now. Love the sketches especially the one of the specatators. I might try to do something myself when I watch the team at Newlands.

The people paintings and the bottom of the stadium with all the color have much more energy and feeling of excitement - something going on - than the top - you can tell you struggled with all the bits and pieces. Nicely done, working through this all in one sitting and coming out with some winners!

Hi Cathy. It's so interesting to read how you're finding what you like and thinking about what to do; and about the logistical issues too--how much can a person carry and use? The last sketch is lovely--I love the gingham field. I think you enjoy drawing people most though, judging from the excellent results!

These are fantastico. I love the 'kissy'-mouthed man below you. all the picnickers, and everyone enjoying a day out.(Never mind the cricket). I loved no 1 till I saw no 3... but think one was good practice for the other. We've been away all w/e but PKR is catching up with it on the box now..in Aus; funny for me to be looking at your sketches from on-the-spot.

I feel as though I've been at The Wanderers with you! These are great, C - very successful buildings and stadium. Hard to believe they made you irritable. Great people drawings too - love the bokkie colours - green and yellow - and the little boy on his dad's lap - with the sharp look to (his) left... Was he curious about what YOU were drawing?

Laura, it is inspiring - I keep seeing USk's that just make me want to rush out and draw!

Liz - I would love to see Newlands cricket sketches, though as I said, you do miss quite a bit of the cricket while sketching!

Rhonda, thanks, I really did struggle with the bits and pieces!

Laura - people are my favourite, but I'm glad to be finding ways to tackle other subjects

Vivienne! Now everyone can see who is the hat-lady! :-) Yay! Congrats on winning the cricket :-( Hope PKR is much better.

Gillian, the little boy took no notice of me, besides a tired/bored stare. The only person who noticed me drawing was a food vendor - he liked it! I did enjoy doing the bottom stadium sketch - the top one, on site, was just too hard for me!