I was awarded the Kreativ Blogger Award by Maree Clarkson, who lives not too far away from me, and is a new, welcome addition to my list of South African bloggers (I hope we can get together for some plein air painting sometime, Maree!)
As you know, with these awards - or memes I heard from Jeanette they're called - you're supposed to list seven things about yourself - which I have done before and don't want to repeat... so let my mind amble off in all sorts of directions, and I did some doodles, and had some flashbacks and spent far too much time on this, but its been fun, and hope it's fun to look at. 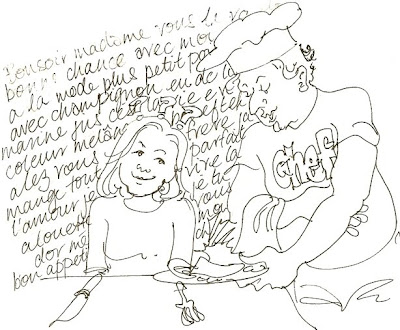 First of all did you know that...

(1) I have my own personal French* Chef who cooks magnificent meals for me, and whoever else is a la maison - with unflagging energy, creativity and enthusiasm.
*Well, he did a year at Alliance Francaise and practices a lot on his French-speaking customers, so speaks more than most people that I know.

(2)I have a weird semi-phobia about phoning people - I want to, and mean to and am very happy when they phone me, but to actually dial, is a major hurdle to overcome... 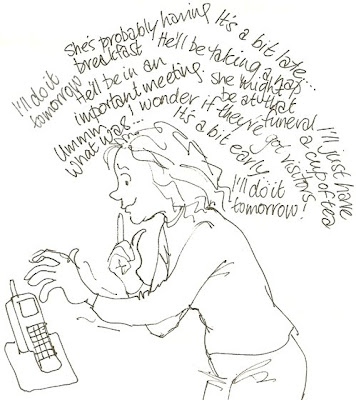 (3) I love cricket (I know, I've said that one before) - to watch that is, not to play - you can hear my French Chef chuckling to himself as he manned the camera in this little video clip that I found from when our son was about 7 and bowling...Then, my mind strayed back in time to some distant memories - I note with dismay that I appear rather bad-tempered or ungracious in most of them - I hope that I've mellowed since then!

(4) I got Honours from the Royal Academy of Ballet, in the then Rhodesia, for the one and only ballet exam I ever did at age 8, for which my mom made me a beautiful pink tutu. A few weeks later, my cute, red-haired little sister was chosen to present flowers to Lady Bird Johnson at the Bulawayo Museum, where our Mom worked as an artist, and who had then to make her a beautiful green tutu... I was incensed with rage and jealou 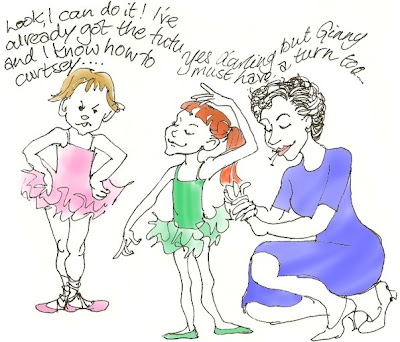 sy. I know now that I would probably have collapsed into a bashful ball of blushes and tears, and Gillian carried it off with sweetness and light, but oh, it was a bitter pill to swallow!

On to some early Drawing memories!...

(5)In Bulawayo, nobody thought I was any great shakes at drawing - I remember looking and looking at faces and wanting to draw them in what I now know to be a three-quarter view, where the eyelashes, and parts of the lids and sometimes even the eyeball protrudes into space, but did I succeed at this quest? Emphatically not, said my best friend... 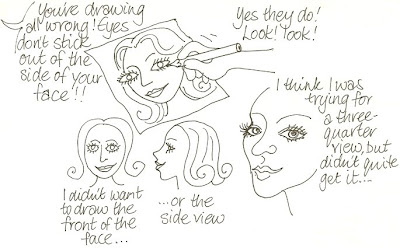 (6) And I tried a bit of anatomically correct drawing of 'a lady' - earnestly and seriously following the curved contours, and was outraged that my classmates put such a lowly, base spin on my carefully observed work of art... 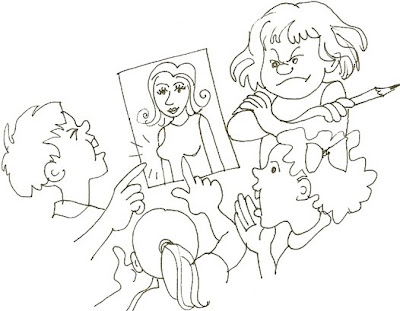 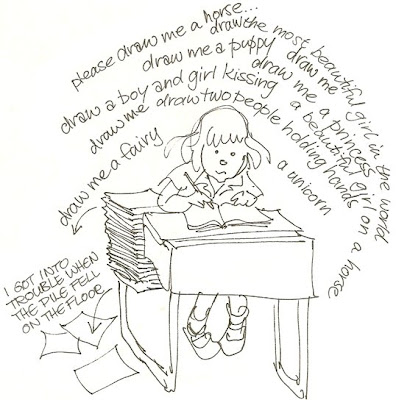 Then we moved to Cape Town, and after being used to stern derisory criticism of my artworks, suddenly...

(7) I was the main 'drawerer' in the class! I had never had such recognition, and was completely unprepared for the demand for my efforts. A pile of assorted papers grew huge on the seat next to me - that my classmates brought and demanded to be filled with their requests - which to my memory I never did, probably offending some for the rest of primary school...


Well - not exactly earth-shattering revelations... but I was thinking when I recalled the last three that I'd love to hear other people's early memories and experiences of their art or drawing beginnings - whether they put you off or spurred you on, so let your minds wander back, and let me know...in the comments or on your blogs!

Now I'm supposed to pass it on...um, so many creative bloggers, so many awards... I think this time I pick
Ginny Stiles- A lively, busy artist who shares her interests generously
Charlene Brown - a sketchercise buddy who writes and paints beautiful light-filled pictures in British Columbia
Robyn Sinclair-another sketchercise bud who is currently making a very lovely series of the Tuscany landscape
Jana Bouc - always creative, always amusing and always worth a visit
Helen Percy Lystra - lovely poured paintings and fascinating frames

I'm going to leave it there - I have spent far too long on the computer again, and I know many who I would give this to, have it already...if any of these nominees want to 'pass' - there's no obligation from my side - just an appreciation...

One more thing!... Coop of Essex left a comment the other day to ask if anyone would be interested in making an Artist Trading Card (2.5 x 3.5 inches) with a portrait of Frankenstein on it and sending it to him - he's collecting them for an online gallery, and maybe to exhibit in a real gallery later... sounds like fun and there are some great entries over on his blog. I might get to that - after complaining about rushing through too many things!
Posted by Cathy Gatland at 4:16 PM

Lovely memories Cathy. Are the sketches recent or did you keep them from your school days? I lost all my childhood sketchbooks in between moving from Jhb to Rhodesia and back. Good idea for us to get together - let me know when you're available.

No, I have no drawings left from those days - these were just what I doodled as I was thinking what to write about - will be in touch...

Ha ha ha C.- great post! Chris went to the Lyndon B. Johnson Museum in Austin a few weeks ago to look in the archives re. her trip to Bulawayo and couldn't find ANYTHING!
And don't you remember what stage fright I got at the last minute. Mom had to talk-through-her-teeth and literally shove me onto "the red carpet" with poor Lady Bird waiting patiently. You would have been the better flower deliverer & curtsy girl after all!

Ha ha - I don't remember that - I was probably watching crossly but smugly from the sidelines. I tried to find a record of it on the internet too - nothing!
Doesn't Chris want to send a 'Frankenstein' ATC to Coop? He'll do a brilliant one I'm sure! (hey, did you post this at 1am.?!)

Yes - it was closer to 3AM my time. I couldn't sleep. Was wide awake, so got up for some hot milk and a 'surf'- while I was sipped it. Often when there's a full moon, I don't sleep well - I must be part werewolf or something... AHwooooooooooooo!

You take after your Dad...!

Hey--I am so pleased that you mentioned my name on this post and challenged me to post some of my own personal "art history". I doubt I can be nearly as clever at expressing memories but give me a day or two and I'll give it a try on my blog. (It was fun to hear Gillian's responses to your memories and your banter back and forth.) I have a sister too!

Ginny, sorry! I was supposed to go and leave a comment on your blog letting you know about this little award (lay awake last night and thought 'oops'!) You don't have to get as complicated - you just need to list 7 things about yourself - unless you want to!... I was just amusing myself and wasting time when I should have been doing other things!

What fun to share your memories.
The line-drawings are so very good... you have captured Gillian's pretty chin, 'something' about Mum -very recognisable. So glad I logged in , though I smell of cow manure ... a gardening day before we 3 go to Sydney tomorrow for a w/e with Johnny.

Thanks Vivienne - a blast from the past - I didn't try too hard for likenesses, so happy that you can see some! I should get hold of some cow manure too - pyoo, but the garden is in need. Have a great time in Sydney & love to Johnny and Nell

Oh that was such fun to read Cathy! And the sketches that came with the little stories are absolute gems! Fabulous.

Thank you so much for passing on the Kreativ Blogger award! I'm really pleased you included me in your list. I loved your illustrated 'art history' stories and will follow your suggestion to tell you about the early days of my career in art -- my first sale! Back in the early sixties, my Mum ran a shop selling art supplies on the main street of Banff, and when she added an unfamiliar new product, oil pastels, she asked me to do a few oil pastel sketches of the surrounding mountains in a coil-bound book to add to her window display. The book drew a surprising number of enquiries and sales of oil pastels -- and lots of even more surprising requests to buy my sketches. Knowing I was having way too much fun that particular summer to take the time to produce any replacements, Mum wisely said they were not for sales. After about a week, someone asked what happened to the lovely sketchbook in the window, and she discovered the whole thing had disappeared! Mum was horrified, but I was quite thrilled. My first 'sale' was actually a daring daylight robbery!

What a WONDERFUL post! I loved it! Your illustrations are utterly charming and your text is captivating and entertaining. And, for the first time.... I was actually able to watch a video that someone put on their blog! Just got my new extended reach internet - still not high speed - but far better than dial up. Woo Hoo!

I absolutely adore your sketches! You made such good use of the award, illustrating your stories instead of just writing them. (I love word/picture combinations -- I guess I never grew out of those wonderful picture books I had as a kid!) Thanks for passing along the award to me. I'm honored to be mentioned on your blog.

Liz, I'm so glad you enjoyed them:)

Oh, Charlene! What a compliment to have some of your first works of art pinched - I hope the thief is still appreciating them! Interesting that your Mum worked with art supplies - I think having that sort of background has got to encourage a future with art. Thanks so much for your story!

Thank you Teresa! I'm so glad you have faster internet at last - sorry the video wasn't exactly top quality stuff for you first viewing!

Jana, your illustrated stories always amuse me - that's probably where I got the idea from in the first place! Thanks!

I just loved reading this, it was so delightful, enjoy your blog..

I loved reading more about you here Cathy!! and I'm so glad to hear about another weirdo when it comes to the phone...I'm so bad that I NEVER answer the phone and sometimes I forget I'm the only one at home to answer it....
And it was so great reading your memories too with al, your cute little sketches accompanying it1
Ronell

Thanks for the funny drawings and recollections you shared with us! and thanks for the list of links, I'm looking forward to visiting them all!

Oh Cathy, I've just realised you included me in this award. How rude of me to arrive here so late - I apologise. Of course I'm absolutely delighted to be included.

Such an entertaining and clever response you've made the your award. Wonderful!