Sad tale of a Dikkop 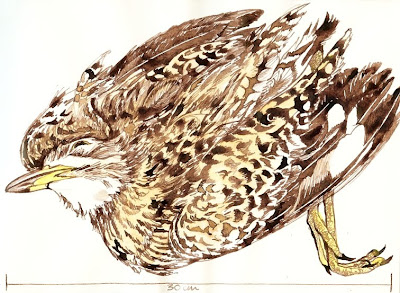 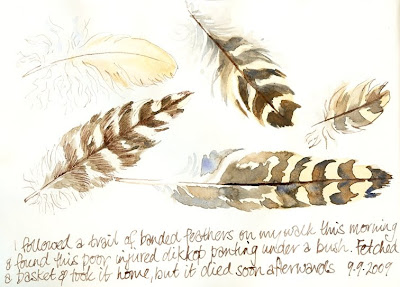 I had rather a sad walk yesterday - soon after I left home I found a trail of striped feathers, leading to a poor, quite large, injured bird under a bush, panting, hiding its head and wishing (I imagined) that the world would just go away. I decide to carry on with my walk, and if it was still alive when I got back, try and do something to help it. It was, so I fetched a basket from home, picked him up and put him under a tree in my garden while I went to look him up in the Bird book and find a phone number for the zoo.
He's a Spotted Dikkop - and I realised when I read the description that we've been hearing him often at night lately - a loud panicked sounding call when all else is still. I had thought it was a bird in distress somewhere, but apparently this is it's territorial scream!
When I went back to check on him, he was dead - killed I suspect, by a certain delinquent black cat in our neighbourhood who I've seen tossing pigeons around with the greatest exhilaration.

I couldn't let such a magnificent creature die in vain, so I spent a few hours drawing him and his feathers that I went back to fetch from the crime scene - in my newly-established sepia nature journal, though I added a bit of watercolour to soften the contrast - for the feathers I used mostly watercolour after finding the pen too harsh and scratchy for their softness.

Posted by Cathy Gatland at 9:39 AM

What a sad story but a wonderful collection of sketches of nature in the raw. Beautiful feathers - not easy I remember? Never heard of a Dikkop even when I was in south Africa, despite all the birds I did manage to sketch including that noisy hadeda we mentioned the other day.

Incredibly beautiful painting, Cathy. It says everything about your sad morning.

You have done an amazing job with the feathers both off and on the bird - loose but authentic. Wonderful.

A sad story but such beautiful paintings of him and of his feathers.

What a great tribute to this creature. Bad cat!

Thanks so much everybody - I did feel a bit guilty about the mixed feelings of upset and sadness, and being quite glad to have the opportunity to observe and draw such a lovely bird at close quarters!

This is a wonderful sketch of a beautiful bird. You tried to help him, but honoured him in another way.

The opportunity to examine birds close up is rare and I know I do it as well when there are casualties that I find in the garden or woods.

So sad for the Dikkop - I had one as a pet some years ago, found him in a puddle of water as a baby. He slept inside in his box every night, waking us at dawn to go outside. Eventually he stayed out all night, coming to bed in his box early in the morning!

Gosh Cathy, so sad. Beautiful sketches though! Dikkops nest on the ground and there are usually two of them. Wonder where the mate is?

Jeanette and Maree - you both being country girls must come across these little tragedies fairly often. It must be a special experience to have the odd waifs as pets (except for being woken at dawn!)

Liz, I did wonder if there's a mate somewhere - and I hope not eggs or chicks in this breeding season. Too awful if there are. I found him near a busy road, so they surely wouldn't nest there - perhaps at the dam...

Nature can really be brutal sometimes. Last year we lost three sets of baby bluebirds to snakes. This year the snakes lost...dispatched by my very capable hubby.

Love the sketch/painting you did. At least the Dikkop lives on in your journal.

Thanks Teresa - How sad about the bluebirds - I'm glad I don't have to deal with snakes!

So very moving and beautiful, Cathy. And the composition of this spread is stunning.

Sad story but beautiful sketches! I'm amazed at your feathers!! They seem so wonderfully fluffy!!

I never saw so many comments. It proves that we are all touched by your story and your sketch/painting. This is frameable. I do now and then frame my sketches. And I love that you have given the bird a small bit of eternal life by recording it.

This is such a beautiful painting. it shows such care. We have a family of Dikkops that nest in the open lot behind our house though I suspect, not for much longer. We also suffer from stray cats.

Wow,so beautiful and sad. Odd how we don't see many dead birds yet they are all around when alive.