I should have said Terrific Day Two in that last post, but I started writing it when I was still trying to catch my breath! Onwards now though to... 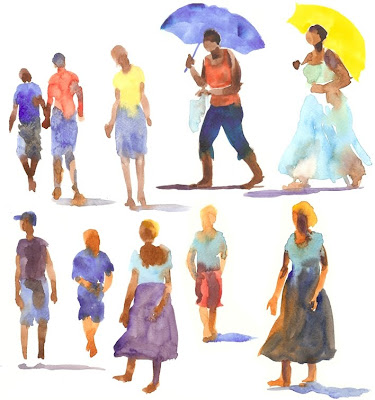 Enthralling Day Three!
Painting people - something I thought would be quite a breeze as I have drawn and painted so many of them over the years. Don't know if it was the workshop pressure situation or trying to follow Hazel's steps, but I really struggled to begin with as you can see in the top set of figures. Part of the problem was still adding too much water to my washes and not controlling the blending enough ("You are in control!" says HS) But once again I learnt so much and have been rejuvenated and enthused into wanting to paint people as subject matter again, instead of just for 'work'.
We began with figures on white paper as coloured 'silhouettes', as with the ostriches and antelope.

Using the size of the brush (an old brush with the point worn down is good in this case) to dictate the size of the head, Hazel made dots and (carefully shaped with brush) dashes to indicate head, arms and legs - hardly worry about the feet, she says, just a touch of shadow to ground the figure. And "to make figures with life... let the watercolours run together... watercolour is beautiful... the reference is just a guide... bad photographs make good paintings... the secret is to make your colour merge..." - some of her running commentary as she effortlessly produced her line of people strolling away, quite ready to go into a frame or a book. Off we went to try and emulate her - and found it was not effortless at all! 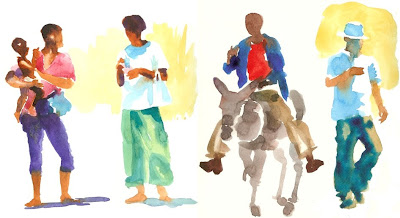 On to 'people with props' - umbrellas, baskets, on donkeys or bicycles - are shapes of shade and tone, not separate elements attached to each other, so again allow colours to merge. "Catch or make the attractive shape...Where arms cross the body, leave a white line on top, allow the shadow side to blend in."
Now here is something I'm sure I should have known, but didn't - if your watercolours are transparent they'll blend together, but opaque watercolours will push out and overtake the transparent colour, as in this example where she's indicated a bright pattern on a skirt by touching Cadmium yellow and red into transparent Turquoise. The turquoise on the right was touched in with transparent Indian Yellow, and it immediately blended with the blue to make green. So if you have a 'coloured silhouette' figure, and you want to add a bright punch of colour for pattern or to introduce light, touch an opaque into the wet transparent. If you mix opaques with transparents on your palette, you'll make mud - who knew??!! I bet many of you did, but it's a revelation to me! 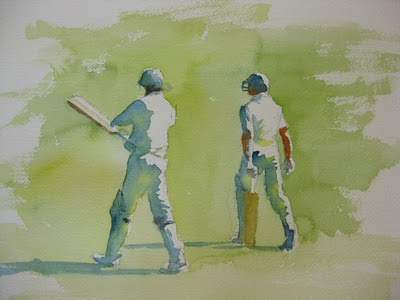 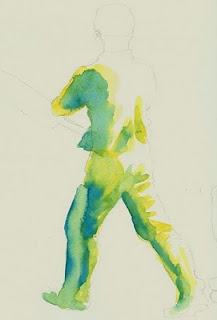 Hazel then went on to paint a quick 'reflected light on whites' painting before lunch, using our own Jacques Kallis and Graham Smith as reference - I couldn't believe the vivid aureolin yellow and prussian blue she washed into the 'white' shadows to start with, but by the time she added the bright green grass, it all calmed into a coherent and believable painting of the cricketers. I didn't have time to finish mine, but here is the beginning of it to show how startling are the shadows before they're put into context by the field (mine may be a little more startling than hers). She hardly mixes colours on her palette, mostly allowing them to blend on the paper - "what people love is the watercolour, not the picture of the cricketers!" 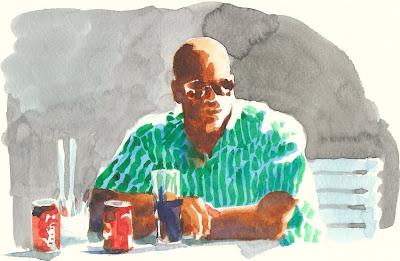 After lunch we were faced with the challenge of a closer up figure, with strong highlights. This one really reminded me of my days as a renderer in the ad industry, and I trusted myself a bit more to do it the way I would have with Magic Markers, rather than nervously follow step by step, and actually they are very similiar methods! Leave the highlights white, in with light tone of burnt sienna, carefully forming the shapes in the face, drop in darks of a mixture of burnt sienna and Winsor violet, then the blue shadow value of the shirt, leaving the edges of the glass and the coke can white. Leave highlights crisp, soften and blend in the shadows - add the stripes in a 'pure' colour, in this case, Hookers Green. Add details into glasses, cans, chair (I should have put more colour into his sunglasses) and wash in the background, carefully leaving the highlighted contour of head and shirt. Voila! This is mine - one I was relatively happy with!

Throughout the day Hazel had been egging us on, saying she had so much more to show us, full of excitement and enthusiasm, but by this point we were all fading - she persevered though, with yet another demonstration of strongly lit figures with deep darks contrasting the lights, I don't think any of us attempted this at the end of the day, we were kaput! Here is Hazel's beautiful painting though - when I get to referring to my notes and attempting this project, I'll put it up on the blog too. 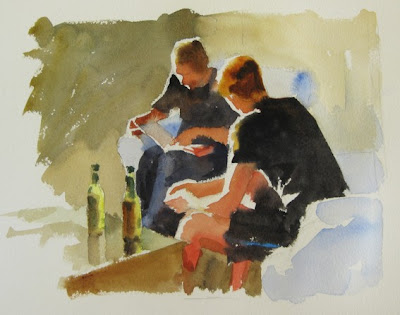 OH my gosh. I LOVE LOVE these.
I am going to try more of these too.
THanks SO much for sharing!!!

Thank you for taking the time to explain how you produced these paintings, so helpful that I will try some of the techniques on the weekend.

Cathy, this is a great post! Even Hazel Soans must be pretty amazed that you are absorbing all this so quickly and so well! Thank you, and her, for this tiny perfect explanation (finally understandable!) of how opaques and transparents behave wet-in-wet.

wow what a post Cathy and what an amazing workshop thank you to you for sharing and to Hazel to have let you post her watercolors, picked up some tips.

Thanks so much for sharing your fun experience at this workshop - beautiful work! Gets me excited to try some of the techniques.

I would love the opportunity to attend one of Hazel Soan's workshops -- but since that is unlikely, your blog posts are the next best thing. Thank you!

You are right to be proud of that figure Cathy and I don't think your figures are half bad at all! As for the ostriches - wonderful! And thank you so much for letting us know all these hints and tips - I can remember Hazel talking about some of them at the demo, and you've brought it all home again!

Your post is a workshop in one go--thanks for that! The figures are all great, astounding ... I love the shapes and colors: I have to remember that about what we love being the watercolor itself.
That's a good tip about the dropping the opaque into the transparent too!

Great job of describing it all for us! It's true--I'm wanting to take notes to learn as well. These images are beautiful--she's right--we do love the watercolor, don't we!? I love your paintings--you did great!

These are so wonderful and full of life. How wonderful to have had the opportunity to take this workshop.

Just outstanding. Thank you Cath and Hazel... two generously talented people. I feel exhausted looking at it all, but it is all here to refer to and keep learning from. Hooray.

Thanks everybody for your comments - I have to say it's been more work than I anticipated to put these together, so I really appreciate your appreciation!!! One more day to go...

Fantastic people paintings, every single one!!! And she's right - what we love is the watercolor and how it blends and moves and not the picture of the people :)

And you should definitely be proud of your portrait, esp. the final one - it rocks!

Cathy, Thank-you so for this.And for taking the time in sharing all of this wonderful information. I'm going to order some of H.S. videos and I'm wondering if you have any and could recommend some? I dearly wish I could be there it would be a dream. But feel so blessed to have you and your wonderful words of the day. Speaking of day have a wonderful one,
Linda
Tell Hazel there are alot of people out here all across the world who really love her and the way she teaches.

Thanks for sharing Cathy, these are terrific posts! It must have been a great experience, she sounds like an excellent teacher.

These are terrific! Your colors are so fresh looking and the motion you've depicted is wonderful. Great job!

Cathy, I have really enjoyed all your posts from your workshop. Thank you so much for posting these and passing along the learnin'.

You wonderful wonderful dear blogger friend to pass on all this knowledge about opaque and transluscent pigments and how they interact with each other. I have always admired your figures in the urban landscape, but from now on I am sure I will see Hazel's magical influence bringing them to even greater heights. Loved the cricketers - especially as my husband played most of our married life and I ended up scoring and doing teas for the local team!!!

I am in awe! I find sketching people really difficult to even begin since I am often too worried I will be spotted. These look so quick and lively! I really want to try this. Maybe a few brushstrokes is the answer rather than lines. Thank you so much for sharing your knowledge!

I just love your blog ... always so much information you share. Hazel's workshops sound like you learn so much. Thanks for sharing!

Here I am late and I've just lost my comment as well!

When I saw the first group of people, Cathy, I thought, Wow, they are good. Of course I had no idea that they were going to get better and better! :)

It's a great and generous post, thank you. I'll be bookmarking it to come back to again and again. Of course I know I'm going to be totally crushed when I do get time to try my own version. I can see it isn't nearly as simple as you've made it look.

Hazel Soan is my favorite watercolorist. Good to see some else who admires her work and talent.