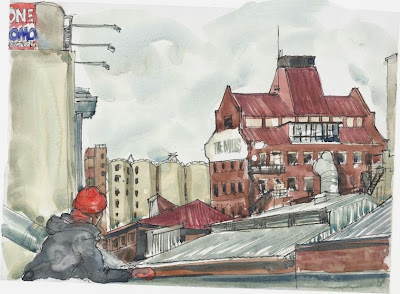 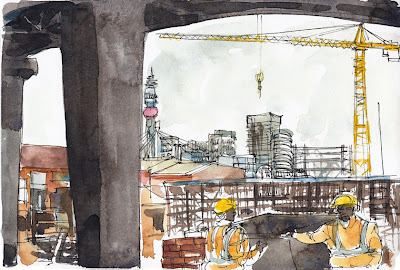 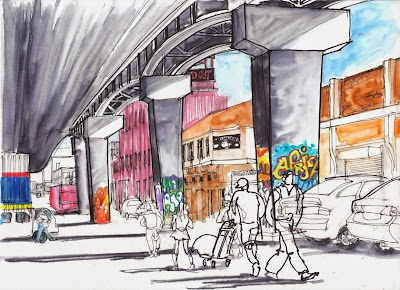 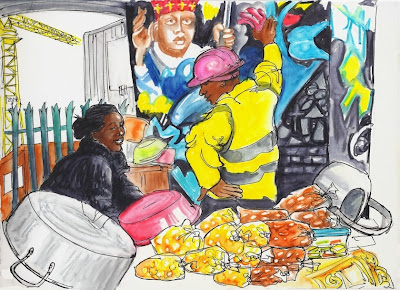 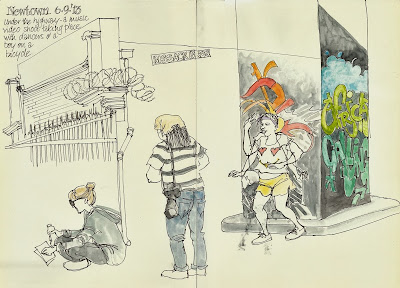 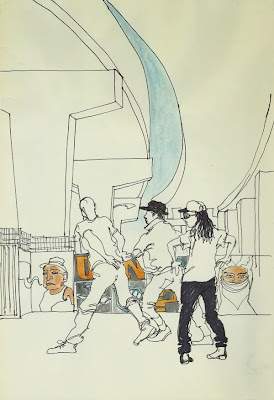 This is a whole bunch of sketches I've been doing on the first Friday of each month, over the last four months. Our Joburg Sketchers group, of varying attendance, have been meeting with some artists from Assemblage at their studios in Newtown on the west side of the city. We join forces for sketching trips to draw some of the nittier, grittier areas of Johannesburg that we have hesitated to venture to before  -though now and then we have been so brave, for the New Year Carnival and one or two other occasions.

The studios are nearby the underside of the big M1 highway, and so far we haven't managed to go further afield than that as there has been so much happening around there. A new shopping precinct, Newtown Junction, being built; vendors cooking, selling and flirting with the construction workers; a music video being filmed with dancers and a young cyclist flying past - luckily over and over so I had a chance to sketch another bit of him as he sped past. (I switched to a new Moleskine A4 sketchbook half way through this series, hence the buff coloured paper!) 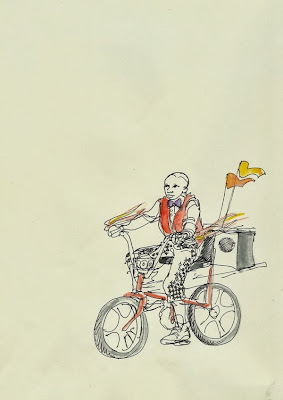 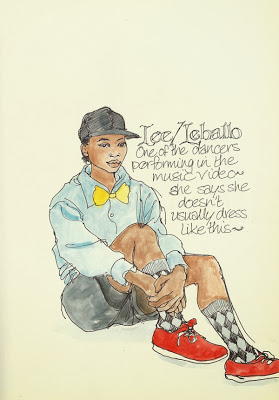 Posted by Cathy Gatland at 4:08 PM

So pleased to be back looking at my favourite bloggers latest works. Afraid I have neglected my blog as I have been poorly all year with re-action to statins and now I have nearly recovered I have re-acted to my high blood pressure tablets. So altogether inflamed and weak muscles plus severe itching and burning of my skin on face, neck throat and arms. Can't believe it all. I too have been using Facebook as its much quicker to keep in touch with family and friends. So as usual I adore your sketch work and think your figures are so vibrant and have motion. Wonderful.

Joan Sandford-Cook said...
This comment has been removed by a blog administrator.
October 4, 2013 at 4:36 PM

Hi Joan, so sorry to hear you've been having such a rough time - I hope your meds and reactions will be sorted out soon! Thanks for your visit and response to these sketches :) (your comment appeared twice so I deleted one)

These sketches are so great. I love seeing the grittier side of Joberg. Thanks for letting me see it through your wonderful sketches.

I agree with Carol above. I love seeing these scenes of real life... they have weight and energy and immediacy.

It's lovely to see your People sketches again Cathy and the place looks and sounds so vibrant.

These are fabulous. I especially like the flirting - you have captured the body language perfectly!

Great sketches!! Sounds exciting! Wish I could join you! :-(