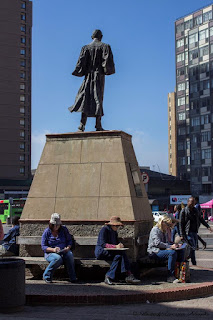 I'm finally getting down to a report of the second workshop I presented in the series to commemorate the 10th anniversary of Urban Sketchers, on the 29th of April. (I missed out on workshops 3, 4 and 5 presented by Anni Wakerley and Lisa Martens, having been away from Joburg).

My focus was on sketching the people, and Gandhi Square being a main bus terminal in the city, was hoping for fairly stationary subjects waiting or slowly moving around there. We met at Joziburg Lane, which is in easy walking distance of Gandhi Square. Once again we warmed up with quick portraits of each other, but this time doing 'blind contour' drawings without looking down at the page - a little cheating went on but it produced lots of laughter and surprising, lively results.


After a short explanation and demo of 'contact points' and relating sections of the face or figure to each other and to the background - which in this case was to be minimal - and encouragement to just go for it - not to worry about results but to enjoy letting loose with line, we set off down to the square. 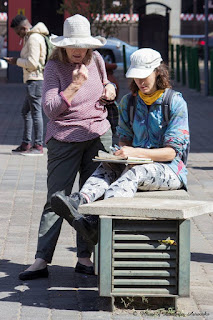 Of course such a large expanse of public space is overwhelming and intimidating to begin with, but it's surprising how quickly one feels right at home, once you've chosen a viewpoint and a perch, and concentrating on the task at hand helps to push curious onlookers into soft focus. 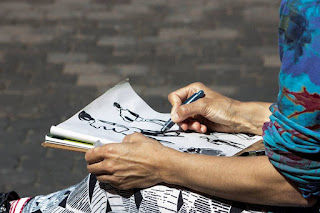 I was thrilled with the results (not all shown here) and varied attempts to capture figures who really never do stay still for more than a second or two. The act of looking hard and trying to put down some essence of them incrementally improves the ability to do so, most especially when you do it regularly and don't let the efforts of the previous day grow dim in the conscious and muscle memory. As I try to remind myself!

Here are are images from my handout booklet for the session. It covers rather a wide range of figure-sketching tips and approaches as my group consisted of a large range of sketching experience and skills. 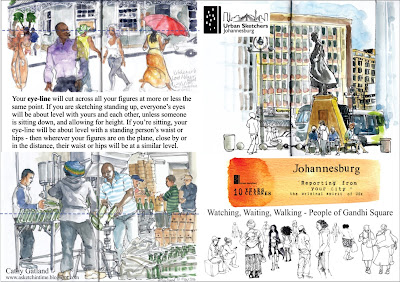 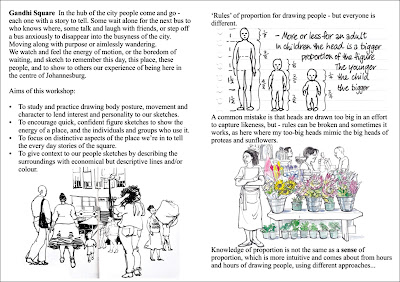 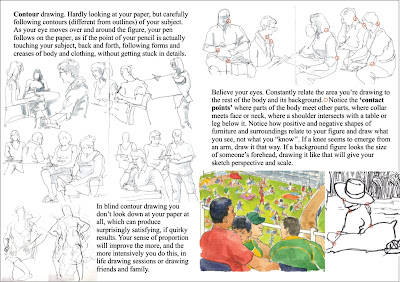 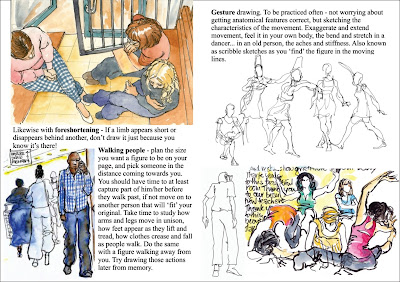 We also took the opportunity to record Urban Sketchers Johannesburg's happy 10th birthday message to Gabi Campanario and USk at this gathering, which was shown to him as a big surprise and tribute at the Symposium in Chicago in July. We're at 1:22 minutes in...

Posted by Cathy Gatland at 5:06 PM

A wonderful post, Cathy! You're a great teacher and artist!! Best wishes, Sadami