The End of Inktober 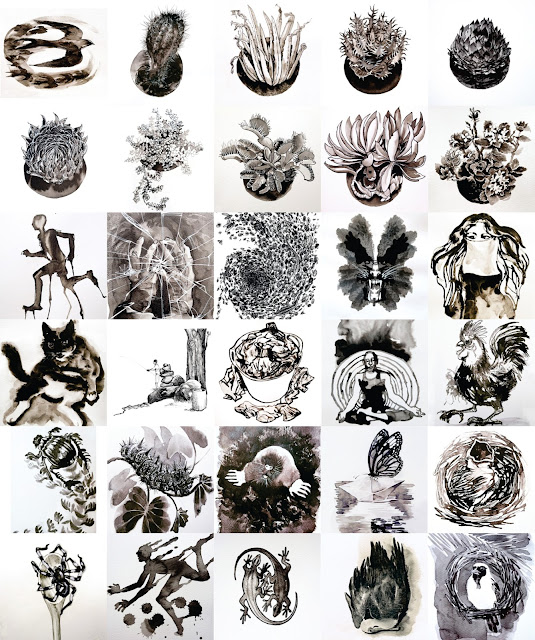 I'm pleased to relate that for the very first time I tackled - and finished!! - Inktober! Spurred on by the fact that I'd committed to exhibit the results along with a lot of other artists at Assemblage, otherwise I'm certain I would have given up around day 4 as usual. There is one missing, due to being knackered after a morning's intense drawing at the bookshop (see previous post), which I'll catch up with for the show. And that yoga one 'Deep' has simply disappeared so I'll have to re-do it.

I started thinking I'd follow the official prompts, but after several attempts at No.1 'Swift', decided I'd rather draw what was in front of me around my home, and did a series of my daughter's succulents which she's left for me to plant-sit. I ran out of those and reverted to the list - from no 11 'Run', with an urban sketching day at Rhodes Park (a future post) in between 'Fat' and 'Filthy'...can you spot those? You can see them on my Instagram if you'd like to have a closer look. 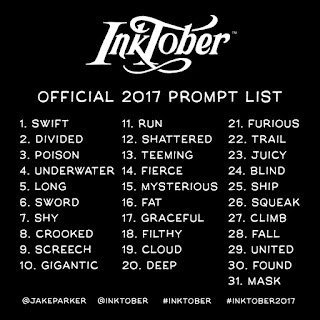 It was a good discipline to do... of course it develops pen, brush and ink skills - although I tried such a variety of techniques none of them really got polished. It was far more demanding than the hour or so per day I imagined I would spend on it, and distracted me from the recent and satisfyingly regular rhythm I'd got into of going into my studio and working on my very own projects and painting ideas - a lifelong goal. Sigh, my middle name is Distractability.

Things I'll do differently if I do it again:


This method was quick and fun - allowing the ink do its own thing within the drawing. The drawing implement was a very cheap plastic dropper that came in an Artliner refill box. I filled it with diluted ink which flowed smoothly and in varying thicknesses over the surface, then added spots of ink here and there for darker tones and drew some finer lines out with a nib while it was still wet. As in this baby bird in a nest, 'Squeak'... 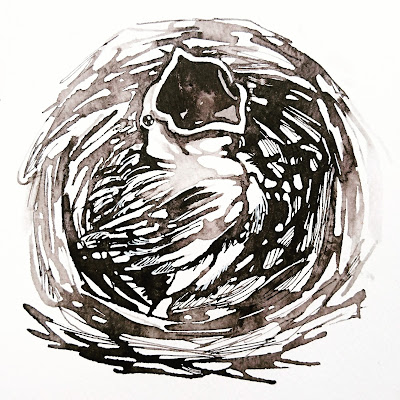 And the most time consuming one, 'Teeming' where I crazily chose insects to teem, although many of them were added as doodles while I waited for pots to boil and ovens to warm, so not as painful as it looks. 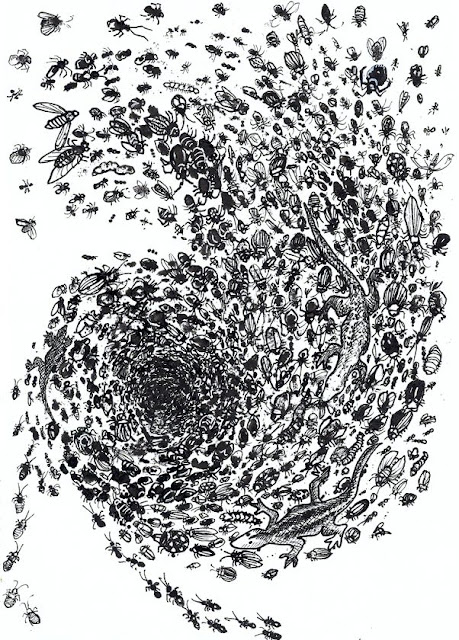 Posted by Cathy Gatland at 5:25 PM

Great, congrats, Cathy! I admire your pen!! Right now, I'm writing on the residency for a blog post. Cheers, Sadami

I loved seeing your daily Inktober sketches on Instagram, Cathy! Congrats for finishing, and I hope you'll do it again next year! I spent no more than 15 minutes on each of mine, and they were all done in a pocket-size notebook. I don't know if I would have finished if I'd been more ambitious than that! :-)

Oh my! Each one is a joy to behold. I think my favorite is the bird with the wide open mouth, waiting for food :) and the big-legged woman in the black dress (I think there is a blues song about wanting a big-legged woman :) You did a great month's work!!!

Thanks Sadami - I will check your progress on the residency!

Thanks so much Tina - you were wise, next year I'll follow your example, maybe I won't be so daunted at the thought of repeating this.

Rhonda, hahaha...this is a mystery to me....where is a big-legged woman!?! :D :D :D is it in the ink-blot rorschach-type one? I wasn't aware I'd done her but that's so funny, would love to know where she is!!

Amazing, this turned out wonderful!! Congrats!