I must down to the seas again, for the call of the running tide...

Well we've had a long power cut today - becoming a regular feature of Life in Johannesburg - thanks to amazing lack of foresight and planning...ugh, but I won't go into all that. I will think of something much more pleasant. One good thing about a powercut is that it forces you to leave your computer and tea-kettle and go outside and garden (which I did) and start a new drawing, which I did but it isn't finished yet. So I'm going to post some pages from an old sketchbook that I did one holiday at Arniston - my son is the little fisherman in the black & white sketch, so it was a long time ago.
Arniston is a wonderful historic village near Cape Aghullas - the southernmost tip of Africa, now also of course inevitably, a growing holiday resort, though the residents and owners have been (so far) quite committed to preserving its original nature. It's also called Waenhuiskrans, due to a cave on the shore that is big enough to hold an ox wagon with its team of oxen (though they would never have been able to get down there), and the original little white thatched-roof house fishing village is called Kassiesbaai - a vibrant and characterful community that still make their living taking their colourful little boats out every morning to catch whatever the trawlers have left them. We are very lucky to have good and generous friends who've invited us to share many an idyllic holiday in the sun and azure sea with them at their beach house. We have a little dream of retiring there one day... 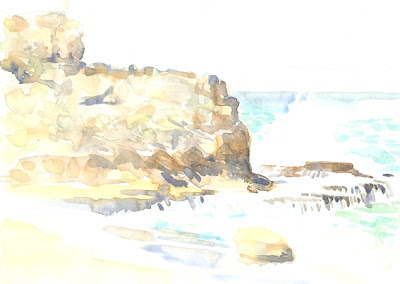 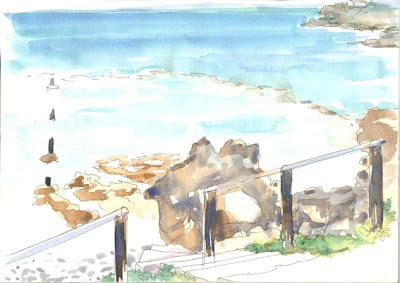 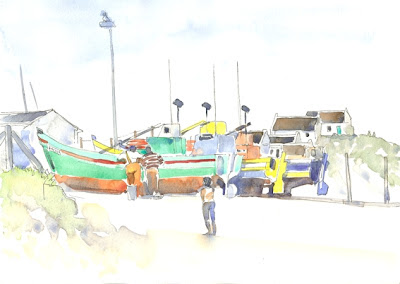 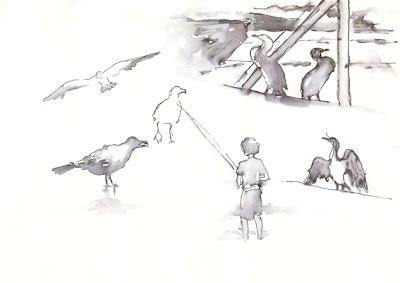 One happy little boy lost in a world of his own - and hungry seagulls and cormorants ready to help him with his catch. 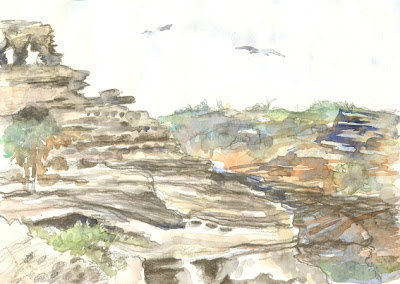 The rocks on the beaches are smooth, round and white, but the cliffs are black and rough - agony to bare feet!
Posted by Cathy Gatland at 1:48 PM

It makes me yearn for a holiday at the SA seaside! Careful - you should keep Arniston a secret, man! Your blog will bring more tourists. Your watercolours are beautiful. That one of craggy cliff, reminds me of those Hermanus walks (Old Harbour) with Mom when we were little and the smell of that plant - what was it?? A bit pungent, but quite pleasant. Didn't like it when I was little - but now I do...

I think it was a kind of fynbos, but looked and smelled a lot like alyssum - I remember that smell well too (the tourists are coming, my blog or not - thanks to Pam Golding et al!)

Cathy - thanks for dropping by. More so since visiting A sketch has been a delight. I'll be back. Often.

My wife & I are Zimbabwean, so the jacaranda pods, mangoes etc strike a chord.
And, my wife is an illustrator (we met at graphic arts college) and I get a BIG kick out of watercolours.
I hope that seeing your work and Adam Cope's stuff at Dordogne Painting Days (http://adamcope.blogspot.com/) will get her off photoshop and back into sketching & painting again. Unfortunately she has to devote time producing stuff she can sell. Which isn't always the same as things she likes painting.

I am happy to find this blog. Love your work. You are talented. Hope to see much much more great work from you. Thanks.

Strong memories of Mum painting at Hermanus, and of course the Christmas holiday we had with the Gats at Arniston... the year of the Tsunami ... the tide rose to perplexing (then) levels, a couple of days after the event in Asia, and we had not heard the news. But what a beautiful spot.
Fynbos has many rutaceous plants, including buchu and the original rooibos.