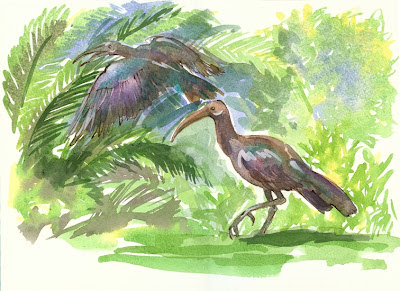 This is specially for Gillian in Texas, whose birthday it is today... Happy Happy to you dear little sister!!... I couldn't believe when I was talking on the phone to her some years ago, she heard some of these birds squawking raucously in the background, and came over all emotional and homesick. The hadedas (Ibis) are the cause of much bleary-eyed cursing in this house as they land on the roof above our bedroom at a quarter to five in the morning, like sacks of cement, gedoenk, gedoenk, screeching their ear-splitting version of the dawn chorus - Haaaauuw, hhwaaaarrrr! They didn't use to live in Joburg - we first saw them in the eastern Cape and were quite enamoured of their shiny petrol coloured plumage and gawky gait. Then the city had a plague - an infestation, of the horrible 'Parktown Prawns' - a kind of king cricket, an import from New Zealand I believe, that had the population in skin-crawling hysteria for a while - we were very thankful when, after two or three years of terror, in flew the noble hadedas, feasting on the hideous jumping, stinking, grinding PP's (who had been feasting on the snails, which have resumed residence in their thousands this wet summer). Now we're left with the 'da's - I don't know what they eat, but I think they're very hungry, going by the arguments they hold in our garden over the compost heap. I guess I prefer them to the prawns.

Posted by Cathy Gatland at 1:25 PM

Thank you, thank you, dear CPG. I do remember hearing the hadedas over the computer (via SKYPE.) They hold a warm spot in this 51 year old heart! Them - and the Cape doves, and the rain birds, and the Piet-my-vrous... Your greenery with the palm look so East London too. Our weather is warm and muggy here in Sugar Land, TX, early spring brings busy activity of red cardinals, mocking birds - and to out little mutt Pippa's delight and frustration, - the squirrels!

Birds do hold such ability to uplift and entertain... I was hoping you'd add the hadeda joke, but I will...
Why do hadedas make such a noise when they take off?...
Because they're afraid of heights! Ha ha de da :-D

I love the Hadeda ibis too, and have fond memories of them pulling those foot-long, fat grey earthworms out of the East London garden soil.Lots of anchoring, grabbing and tugging,leaning way over backwards, so as not to let go before having to tackle the next length of worm. Like really strong living spaghetti. We were in Jo'burg when the first grey louries, "Piet-my-vrou"s arrived to stay, but the hadedas arrived later. Happy birthday Gillian.

Ooh, I hope they're not eating our precious earthworms! I've been watching them more carefully,(I painted this from quickly taken photos as they took fright and departed) and I've made the feathers way too dark, and the legs and beak much too thick... will have to try again - make a little hide in the garden perhaps.

What a lovely surprise for her birthday.