I have been snowed under with little necessary jobs for the Fair, and for Advent, which starts on Sunday, but last night we went to the launch of 'Art & Justice', a beautiful book (that MY husband printed :-) produced by David Krut Publishing, about the art collection of the Constitutional Court. We went to a similiar book launch a year or two ago, and went on the court tour given by Judge Albie Sachs - it was a total eye-opener and the first time I really felt absolute hope for this country, and real pride in how it's overcome it's past, where it is now (full of faults and problems as it still is!) and especially in our unique, accessible and unconventionally beautiful Constitutional Court. 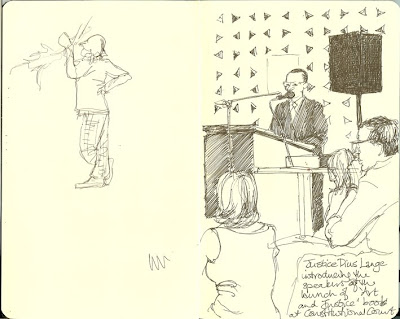 Anyway, I took the chance of being off my home/studio/school-run treadmill that I've been stuck on for weeks (I don't normally regard my studio as a treadmill, but it has been just pure slog lately!) to do some sketches of fresh new figures. Above is Chief Justice Pius Langa with listeners. (I've forgotten who that figure on the left page is - oh I remember, he was a student at my son's school, standing on top of the wall waiting for a lift) 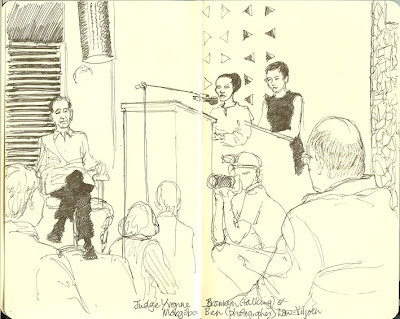 On the left is Albie Sachs, who lost an arm and an eye in a car-bomb attack in the 80's, and is the main mover behind the wonderful art collection - much of which is donated by artists such as William Kentridge, Marlene Dumas and Karel Nel, as they have a very limited budget to buy art. 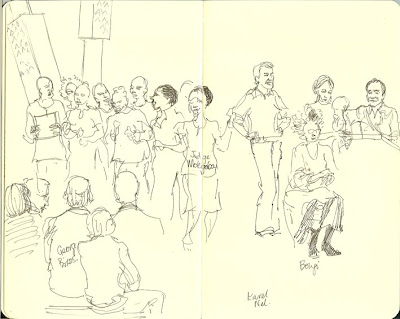 Workers at the court - cooks, cleaners, secretaries - and Judge Yvonne Mokgoro - form a talented group of swaying, swinging singers that entertained us in between speeches. Justice Sachs gesticulates wildly with what's left of his arm, as he introduces some of the artists that could make it to the launch - Karel Nel, and I'm not sure who that is with the baby - I was too engrossed in capturing the scene. Bongi is Albie's P.A., who wore a wig resplendant with the colours of the SA flag.
I'm still not comfortable with sketching in public - though I was very discreetly at the back - my heart was thumping throughout and the sketches are very, well, sketchy.

Posted by Cathy Gatland at 9:37 AM

your sketches are lovely

These are so interesting, C. I'd love to have been there. I remember you talking about Albie Sachs before... Amazing man. Well done on being brave and sketching in public! They're not "sketchy" at all - full of life and interest - and reminds me what a unique place South Africa is.
~ Okay back to my pumpkin pie making... Bye for now.

Cath these are inspiring and historic images. I really hope you will take the trouble to preserve them well. I think they should be in the next Court book.Have a word with the publisher.
I will come back to read your references as they are fascinating.Much love from UK where I have been v,v busy with the board meetings but all has gone exceptionally well.I got a rotten cold the very minute the last person left!

The sketches are pure genius, pure life! You really captured something--the hope and love you express is really visible in your drawings. Maybe there is hope for all of us! May "reconciliation" be the watchword for the coming years!
(And congrats to you husband-it is exciting to be involved in the publication of an important book!)

Thanks for all your kind comments - pure genius, Laura!? Gosh, I blush! But discovering the C.C. is one of the best things I've ever done in Johannesburg - long may it stand.