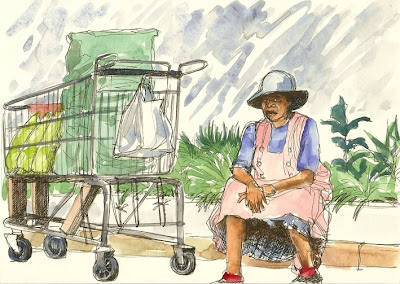 Another summer sound of Joburg, besides the Icecream men, is that of the Mielie ladies. They tramp the streets with bags of mielies/mealies (corn on the cob, or maize) either on their heads, or as our local saleswoman does, in an old dilapidated shopping trolley. They all seem to have voices like foghorns, that you can hear coming six streets away, and carry on fading

for the next six, shouting MIIIEEE-LLL-IIIIES! over and over. They have been immortalised in the comic strip 'Madam & Eve' by Stephen Francis and Rico, which appears in our Mail & Guardian newspaper, where the granny makes it her mission to chase the poor woman with a slingshot. I found our annual vendor taking a break on a wall across the road from our house, and asked if I could sketch her. I don't think she understood me, as she watched me very suspiciously, but cracked a smile when I showed her the quick line drawing I did - I worked on it some more later as I didn't want to prolong her unease. And scribbled another one as she pushed her trolley off up the slope, finishing the surroundings after she'd gone. 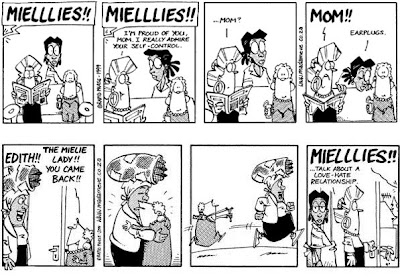 Then there are the broom and feather-duster men, who you also hear coming for miles, as the neighbourhood dogs frantically start barking and egging each other on as the salesmen whistle and yell and ring everyone's bells. Sometimes they're parked on a nice grassy street corner, displaying their wares, and if you need a feather-duster, you know exactly where to find them! I sketched this in my new moleskine, which I'm not familiar with - and tried to put a watercolour wash over it. Oops, mistake... 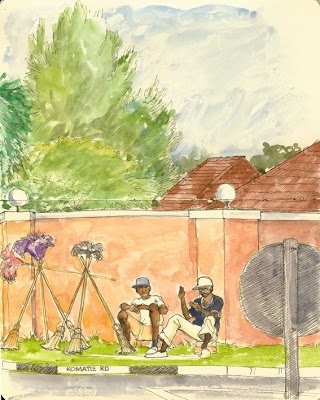 Posted by Cathy Gatland at 3:35 PM

You got her look of suspicion spot on! I know all that yelling can get annoying, but I'd sure love to hear the Mielie Lady's call. There was a beautifully dressed Broom Lady in EL - wearing German Print blue + white. She would have been a great subject for a sketch. Can you not do w/c on Moleskine? Is it for sketching only? Thanks for posting the Madam & Eve - brings back happy mems!

Love the look into the streetlife of Johannesburg, in your paintings and words! I love the trees in the sketch of the Meilie lady walking away. The watercolor in the Moleskine looks good to me: the scratchiness of the light tree's foliage is just great!

I love the way you post those little "slice of life" stories along with your paintings. The painting is so fresh and clean, and I particularly like the way you captured the mielie lady (whom I'd never heard of until I read this) sort of slumping over/pushing her cart. I've learned more about "Joburg" from reading your blog than I've ever known before. Thank you!

Thanks all - glad you enjoyed this :) - we do have a rich and varied street life! My moleskine is just a normal blank one GH - you do get a watercolour sketchbook moleskine that probably takes paint well, but this one the paper is a bit greasy, so it rolls off - quite good for foliage, as you say, Laura!

I just found your blog, Cathy, and really like your posts— especially this slice of fragile cultural life about the Miellie ladies. Wonderfully illustrated, too. I'm looking forward to the post on justice when the cats are not crawling over me demanding breakfast.

Suzanne - it's so nice to have you visit - I really love your watercolours. I quite understand about the cats... first things first with felines!