A Bash at a Building

Ooh-er! I've changed the look of my blog a bit... was really trying to make the pictures bigger - I see on Urban Sketchers some of the drawings are nice and big on the page layout, but I can't get mine to do that. Not sure that I like having a background colour - I really like plain white - if anyone has an opinion, please express it! 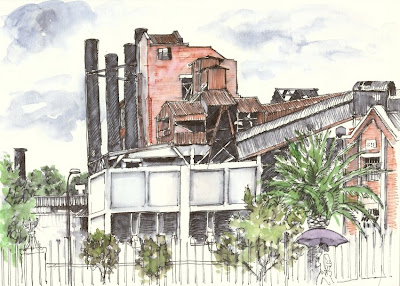 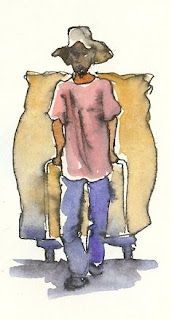 I was determined to sketch a building for US this morning, and as I've driven past this one innumerable times thinking I should try it, I chose this rather ugglesome one - the Old Gasworks, a Joburg landmark on the way into town. A mixture of brick and corrugated iron structures, its abandoned now, except for a pottery down in the basement, but apparently there are plans to develop it in the future. Ugly as it is, I hope they preserve it and renovate it sensitively. Joburg has a reputation for demolishing its historical old buildings to erect whatever is considered up-to-date at the time.
I also scribbled down this man pulling his hugely laden trolley through our suburb. He's one of many who collect plastic, cardboard and tins from household rubbish put out on the pavements, and take them to recycling centres. Good for the planet and some money for his pocket.
I used a Pilot fineliner to draw with, blending it with the waterbrush to make darks (and fuzzy up my inaccurate lines on the buildings!) and adding watercolour afterwards.

Posted by Cathy Gatland at 4:01 PM

love your sketch of the building but the little man is super as well. don't know either how to post bigger images at US and i prefer a white background can't help out !

Curious... which template are you now using? Some of them allow you to change the background color.

I like the new look. It's almost like you're looking at a sketchbook, open and showing the drawings. I especially like the placement of the man and trolley - he looks like you just drew him right there next to the words :)

Lovely sketches. I recognise the Old Gasworks, and love the interesting geometric shapes. Your recycling man is another classic! Super.
I am sure white must be the best background for most watercolour. Your suggestions of clouds are fantastic. You are doing it all so well!!!!

I love the sketches and the building... we have the same problem here... demolish historical to replace with something new... or a parking lot.

Hi Cathy, I love the gasworks painting too; so interesting, all those shapes, the smokestacks, etc., and I like what you've added: the trees, the pedestrian.
I like the white background--it's uncluttered, undistracting.

Thanks for your input all, I've changed it back to white and feel a sense of relief! I think I'm really a stickler for routine and sameness, apart from my actual art, which is all over the place!

Looking at your posts makes me want to get out the pen and ink and try new things. I'm a student at an atelier, still in the b&w phase of training. Color has to wait until value is mastered. But I have to say I loved your suggestion in an earlier post on hats (6Feb) regarding quick sketch from TV images and using the pause button to flush out details. A great little suggestion for source material. Thanks for your thoughtful content. Regards.