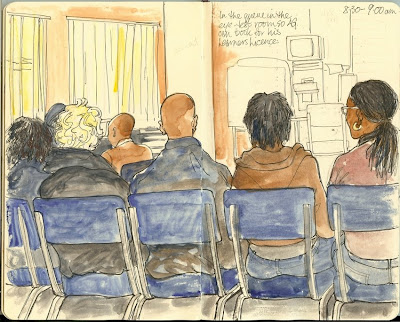 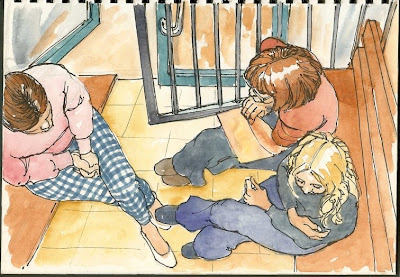 After saying I wouldn't have time... yesterday I had plenty of time to draw people waiting in queues at the Traffic Licensing Centre. My son was booking to take his Learner's Licence next month. We had tried the day before and I had been reduced to a gibbering frustrated wreck by conflicting instructions on what to bring, where to go and what the opening and closing times were. But yesterday we got there early and a mere three hours later we were able to go home. 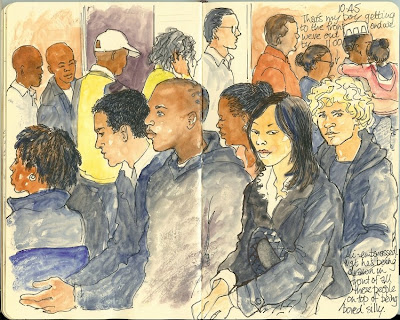 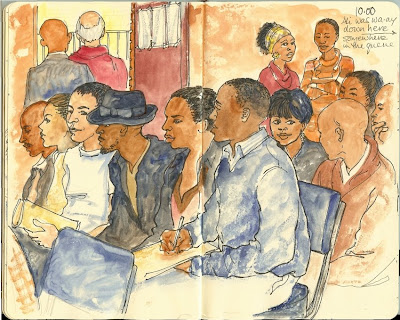 I'm so glad I've got into the habit of taking sketching stuff with me wherever I go. As always, the time went quickly (not for my son, for whom it stood still!) and I felt a productive sort of morning had been spent.

Posted by Cathy Gatland at 2:24 PM

Very productive! What wonderful sketches. And what a crowd!Do you color them at home?
I sympathize with your frustration--sop many things unnecessarily complicated, as if someone is trying to make you crazy! ;-)

Your figure work is stunningly good and I admire the colour combination. Each one is a portrait it itself and full of character and fine lines. Wish I was brave enough to tackle such crowds.

I agree, the "waiting" is my most productive time. Here you have captured the moment for ever. Your superb skill is apparent. Thanks for sharing your day.

The auto licensing and registration works are the same all over the world. This proves it. Have you posted on your tote-along sketch materials? Also, would love to see you sketch a court proceeding sometime. You'd do a great job!

I did colour these at home Laura - I sometimes paint sketches when I'm in my car or in a place with space, but mostly do them later on.

Joan, I was trying to restrict my palette but just had to add the odd yellow and red. I'm getting braver in crowds - some heads acquired other people's bodies though, as they moved along!

Thank you Pat - isn't it great to turn 'wasted' time into a positive? Just wish I'd started doing this years ago...

Suzanne, I'm glad to hear it's not just here. I will post about my materials sometime, though they undergo revisions constantly. I try and get likenesses but I'm not sure these people would recognise themselves - court drawings would be interesting to try!

HELLO, i"M TEACHING MYSELF ALL THIS ART STUFF AND SOMETIMES YOU COME TO THE CROSS ROADS OF aRT AND HEAR i AM. cAN YOU PLEASE HELP ON HOW TO DRAW PEOPLE LIKE YOU DO. aRE THERE ANY BOOKS DVDS ECT TO HELP. tHANK YOU SO FOR THE TIME.
lINDA

I wrote something yesterday (was the first) but it did not come up. What a lot of great characters and a brilliant use of time.What a lot of waiting we mothers do! Over the years? Eeeek. Could have learned Russian!So Ali G is to gain wheels (and perhaps his Mum will be losing her car?)> Best of luck with the driving lessons.

Hi Linda - though I've drawn people for as long as I can remember, I've had jobs where I had to draw for 8 hours a day, at least 5 days a week, and got a lot better at it during that time, so I would say, as most books do, practice, practice and more practice. I still feel I need more of it! A good general book is by Sarah Simblet - The Drawing Book, and there must be lots on how to draw people in particular, but I don't have titles at the moment. If I come across any I'll post about them.
The About website http://drawsketch.about.com/ might be useful, as I found the painting one to be. All the best with it, and keep in touch. If I work out a way to pass on what I know, I'll post that too!

Thanks Vivienne - my comments sometimes get lost too, I don't know why? When I see the sketchbooks some people have filled (see Sketching in Mauritania's latest post) I'm really cross with myself for not using all that waiting time before. But better late...nê?
There are a couple of cars abandoned temporarily by sisters, so hope he won't commandeer mine - and I hope hope hope I don't have to give too many of the driving lessons!

These are fantastic sketches of the "bureaucratic wait" and lovely to see glimpses of ma famille in the crowd... I won't tell SLH that ARG will have wheels soon... We're trying to delay that for as long as possible. (It is interesting how similar Houston people groups are to SA...)

Well ARG will be happy that at least one (slightly) younger guy hasn't beaten him to the driving stage - he is already a year behind most of his peers with the Learners! Hopefully the Drivers won't be far behind, though I believe that entails a whole lot more bureaucratic combobulations! (is that a word?)

great sketches and lots of characters - I loved the idea of transplanting heads!

These are marvelous--time well spent!

Fabulous fabulous...brought back memories of my time at the licecing department in Silverton, there we had a two hour wait standing in a snaking queue...I really enjoy your blog looking at your work and remembering home...I have started taking my drawing materials in my bag but as yet have not had the courage to take them out and use them...I will one day I know I will....

I'm amazed at how many people you can sketch !! And the sketches seem to have been done calmly... Are people sitting nicely still for you to sketch them or what? ;-) What's your magic trick?

Wow....what a great use of your time... and a wonderful end result! Your sketches/paintings are so wonderful.

Hello Cathy-
this is your fellow Usk. Memi.
These are wonderful-
I am going to be in South Africa this summer, visiting with a friend in Durban. I am not yet sure how my trip will go, but it would be nice to meet up and draw if I get to your town.
Would you be up for that?
www. melaniereim.com
Thanks!

Great sketches Cathy..and a wonderful place to be stuck for 3 hours with a sketchbook...as your sketches prove!
Ronell

Love the expressions. Always good to find pictures that make me smile. By the way, impressed with the foreshortening.
A suggestion for Linda might be to go to 'scribd' and search for 'Andrew Loomis'.

Great sketches. The color just brings it all to life. Fun inspiring blog.