Easter in the Square 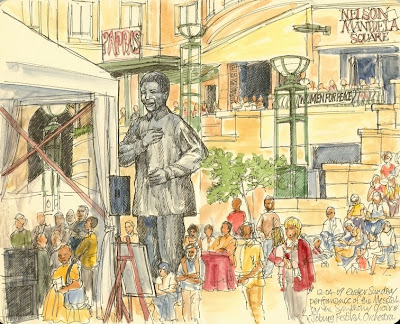 Yesterday, on Easter Sunday, we went to a free performance of Handel's Messiah at the Nelson Mandela Square in Sandton. The marquee was packed by the time we got there, so I found a plantpot to perch on, and sketched the back end of the audience, with the statue of Madiba doing his slow dance as the focal point. The acoustics weren't the best outside the boundaries of the tent, but there was a joyful atmosphere of 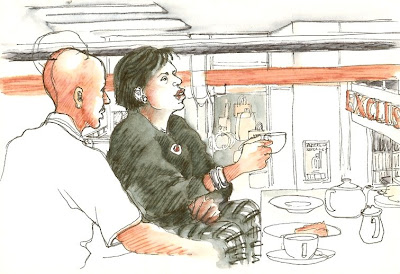 sharing this wonderful music, and the day with others.

My husband, meanwhile, had found a young man that we'd met at church in the morning, an American working for the Clinton Foundation in Kenya, on his way through Johannesburg.
He had had dinner the night before at one of the restaurants in the Square, and would you believe Clint Eastwood, Morgan Freeman and Matt Damon were there, in the country shooting a movie about Mandela and the 1995 Rugby World Cup! How I would have loved to have sketched them for Urban Sketchers, though I'm sure I would have been too dazzled and star-struck to have put quivering pen to paper! We went to have a drink after the concert and I had to make do with a couple of ordinary, but no less worthy I'm sure, South Africans - ah, but for what might have been!!!
Posted by Cathy Gatland at 10:24 AM

This is a magnificent drawing...:) Cathy, Is this the sketch pens or water colors?BTW Happy Easter and Take Care!! :)
Megha
Art on Sketchbook

I really admire your ability to catch a scene so naturally when there is so much movement!

Thanks Megha - I drew them both with a 'Unipin' pen, which is waterproof, but the top one I coloured with watercolours, and the bottom one with water-soluble black and sepia pens which I then moved around with a waterbrush.

Hi Elizabeth - it was a constant struggle to get the essence of a figure down before they moved too far, and not to get too detailed with the ones sitting still!

what lovely sketches.
It's such a delight to see your work

Enjoyed visiting your site, I had a nice cup of tea while I took a break in my day so I could go to the concert with you. Love your Urban Sketch with all the action.

Oh I so don't know this place called Jannesburg anymore! I've never seen this statue, so thank you for bringing it to us down here. Gorgeous! And your ordinary South Africans are so un-ordinary.
(I believe that Clint Eastwood, & co. will be at the cricket on the 18th! - I won't be painting them).

These are just awesome. Mandela fairly dances off his podium.
I see you did have a lovely Easter, as we did, with your beautiful daughter!

What a wonderful day, including the near miss sketch! Your urban sketching is a delight and so masterly and this particular one should be snapped up for a poster of life in Jo'berg. Your lettering is outstanding and your replacement celebrities sketch shows your expertise with figures. My heaven, your observation is so polished.

Thanks Dominique and Pat - lovely to have you visit!

Liz - I'll watch for Clint etc on TV and maybe sketch them from there - thanks for the heads-up!

Shew, Laura - I'm blushing - I seem to get less sure about my sketches, not more, so thank you.

Vivienne, thank you for having AJ and friend over Easter - such a good time to have family to go to. (I kind of cut Mandela off at the shins really, so his dance is a bit stunted!)

Joan, you are kind, it was a wonderful day, I'm glad we got out with the sunshine and the people - I'm an inveterate people-watcher!

Great sketches, Cathy--you really make me feel like I'm there, with the scenes you choose and the detail you provide!

Great sketches! You really managed to re-create ths scene! I feel as if I've been there and seen it myself!

Hi Cathy--Thanks for the recommendations re yellow; I tend to choose all the cool ones, and then be displeased! I like New Gamboge; and Indian Yellow is really a great idea for me--nice and warm!

It always amazes me how much you put in your sketches and yet they never look overdone or crowded! Don't think I could do urban sketching... I wouldn't know where to start!

Wonderful sketch (although it really looks more like a painting)

What a fabulous day for you and your work is awesome, as always. So enjoy visiting here.

Wow you do some very involved sketeches - very nice.

Hi,
I love your colored stetches and also your watercolors.
I come again an other day here

oh my, what a wonderful work, you are very talented