A Day at the Zoo

The BFG and me went to the zoo yesterday - the first time (since we've had them) that we've been sans children. There was a birding exhibition on that my friend Wendy had a stall on (see her stunning wildlife cross stitch kits here). On a chilly autumn day, it was relaxing to wander around not worrying if the kids were trying to pet the rhinocerous or feed ice cream to the orang-atangs. And of course to sketch, while B took photos and chatted to fellow animal-gazers. 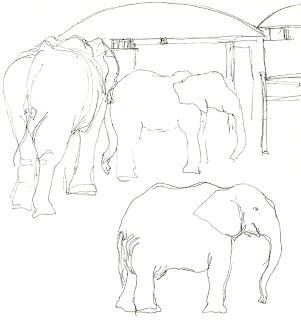 I began with the Johannesburg Youth Orchestra in the rondavel in the middle of the exhibition. I put on a little watercolour later at home, determined not to do my usual 'colouring-in' thing and use it to subtley indicate the season - even so, after planning to put just a splash of colour in the middle branches, couldn't resist doing almost all the leaves, and the little plain(plein?)tree seed balls too.

Then I tried the elephants, but before I'd realised I was using totally the wrong medium to draw their massive bulks quickly before they moved, they lumbered off to a group of people behaving like a bunch of bananas on the other side of the enclosure.

On through the crocodile ponds - I enjoyed sketching this very co-operative model - only it's eyes blinked, so slowly that I caught them in mid-blink I think - they're neither open nor closed. I'd like to go back on a quiet day to draw them. There were a whole necklace of them splayed around the water's edge. The guineafowl feathers were lying around - aren't they beautifully graphic? I can never resist collecting them for some (so far) mysterious purpose. 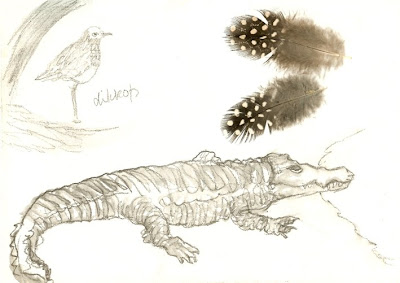 Up to the lions - there are a few different groups of them cordoned off from each other. This big handsome boy was besotted with the sleeping lioness, licking and nuzzling and resting his head on her. The other poor girl tried to get his attention, getting up eventually and offering him her head for a cuddle, but he snarled and growled at her and she sadly resumed her position. Has she no pride? (sorry!:-) 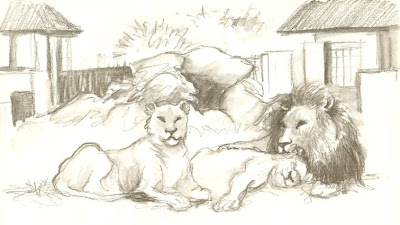 Lastly the giraffes - as this was my Urban Sketchers date too for the week, I included the very posh Westcliff Hotel up on the hillside. I meant to paint it pink, as it famously is, but this is in water-soluble graphite, so the pink would be dirty puce if I tried. 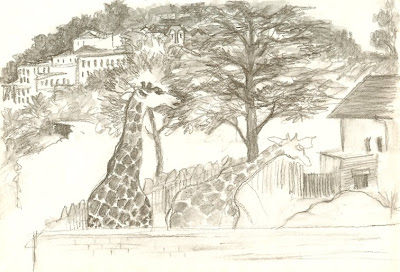 While I was sketching the giraffes, some little girls came to have a look, and were flatteringly impressed, and wanted to see all my sketches. When they saw the orchestra one they were very excited, as one of them was the girl playing the violin on the left. She was overjoyed to recognise herself. If I'd had my wits about me I would have got their email address and sent them copies of all the sketches - darn it - next time! If you see this, girls, tell me and I will...
Posted by Cathy Gatland at 4:51 PM

I am, like the girls, duly impressed (as always). The lines for the animals are confident and marvelously descriptive!

What a fun day! Ah my heart aches for the needy lioness (with no pride!!) These are great - yes, I like the idea of just adding a suggestion of colour to a sketch. Takes a lot of pressure off people like me - - - if I were to try something like that(!!??!!) I still have a whole bag of guinea fowl feathers I collected at the time I wrote that long letter you returned to me. (A fox had killed the hen.) Russ has tried to throw them out several times and I rescue them indignantly and hide the bag once more from him... Hilary had a whole drawer full of weird treasure she'd collected that were going to go into a painting some day - so I don't feel too bad about my one bag of g.f. feathers! (I think I had an idea to make a mobile out of them - remember the ones we saw at that artist friend of H's who lived in a big thatch house between E.L. & K.B.?)

What a lovely day and glorious drawings. I especially love the lion and the big baggy elephant.
Wendy's cross-stitch kits are stunning. Has she designed them herself? I hope she had good sales.

Thanks Suzanne - I am quite impressed myself, when I impress such as you - if that makes sense!?

Hi GH - ja, I felt so for her - BG assures me they don't think the way we do but :..( And oh my, those bagsfull - pods, shells, feathers, fabric, leather, stones - could be dream-catchers, sculptures, dolls - but will we ever DO it?

It was a lovely day, V - yes, Wendy designed them and they are so intricately worked out. Very very fine - definitely not your run-of-the-mill craft kits!

Your sketches capture your day wonderfully! Thanks for sharing them with us.

Your fabulous sketches brought back vague memories of the zoo and Zoo Lake! I think the whole place might have changed, but the animals are still the same. Lovely.

I think Zoo Lake is about the same Liz - besides a new restaurant, and most of the zoo - they've built some new enclosures and viewing decks and there's now a funfair just inside the entrance, which I'm not crazy about, but I'm sure children are!

Hi Cathy, I that you shared your day, and that you had a day with BFG. Your drawings show how relaxed you were.

What great sketches!!! I'm impressed by the one of the lion and lionesses!!
Thanks for your words too, you make the whole outing very much alive for us too!
... and isn't it plane (neiher plain, nor plein) tree, by the way? ;-)

Hello Pat - yes it was lovely to get away from precision drawing and deadlines for a while - glad you enjoyed it too!

Thanks Cathy for your visit and comment - Yes..! My husband informed me that it's PLANE tree - that option didn't even enter my head, I'm ashamed to say. I wonder why its called that?

Great sketches! I especially like the lovely contour drawings of the elephants.

Lovely representations on all of the species. I just love your loose style on these. The "splash of colour" approach is an interesting thought. May have to try that myself.
Thanks for sharing your outing . . . a joy, as always.

I know that this isn't exactly a comment, but I couldn't find your e-mail address, and I wanted to write and tell you about a new website for artists, musicians, fashion designers, and filmmakers: www.PutItOn.com. I've been using the site as an artist and have my work there, and am trying to support it because I believe in it. Basically, the site allows artists from all over the world to connect, display their portfolios, and sell their work (with NO commission taken!). The site gives artists a FREE gigabyte of space to showcase their portfolios, allows you to stream audio and video works, lets you create live personal broadcasts, and translates any writing into ten different languages. If you could take the time to visit the site, and if you like it too, let your readers know about it, and even sign up yourself or link to it on your site it would be greatly appreciated! We are trying to make a go of helping out artists everywhere and are trying to get the word out, so please help us out if you like the site after checking it out! Thank you!

All the best,
Sarah at PutItOn.com

These are all nice and unique on its own way.

What a wonderful day and the sketches are outstanding. Particularly love the bandstand and plane tree. Would be good to see it in colour.
What a lovely story about the girls playing - hope they read your blog.
I too collected guinea fowl feathers during my visit to RSA and stuck them in my sketchbook with my own sketches. So beautiful and soft.

What great sketches, lovely blog .I love much
Greeting from Belgium.
Have a nice day and weekend