My seagull as a Miro 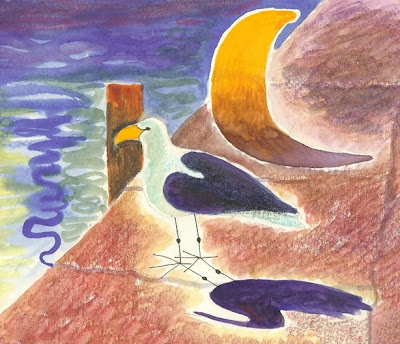 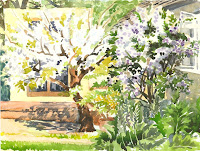 ...with apologies to Miro! I took my Seagull painting and a couple of other watercolours - spring sketches done in my garden - to the Watercolour Society yesterday to submit for a "New Signatures' exhibition. I've put off getting more involved in the WSSA for so long, and though I wasn't too confident about my paintings, I thought I'd Just Do It instead of procrastinating for another month/year/decade. I overheard two members there puzzling over the painting..."What is it?"... "a banana?"..."I don't know..." And when my son asked which paintings I'd taken, I told him and he said, "Oh, ja, the Seagull and the Banana"! :oD Then my sister Gillian asked in the comments what is a bollard, she's never heard of it, I thought I'd better explain a few things!
At Kalk Bay harbour I was talking to my husband about 'those yellow things', and he informed me they were called Bollards, which according to the dictionary is a 'short thick post to w 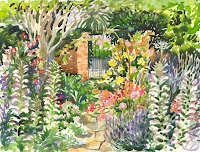 hich a ship's mooring-rope may be tied' (my husband knows everything!)
I was seeing the shapes as a sort of abstract design - crescent moon (I didn't see a banana!), heart and bird-shadow, and in a realistic painting I probably should have described the bollard better - painted round the ellipse at the base instead of blending it into its shadow, or else done it whole-heartedly as an abstract - even my 'Miro' version could get a lot more abstract.
I'm kind of expecting to have to collect my Seagull from the WSSA after selection day, probably with a kind but baffled comment about the Yellow Thing hovering above the gull...
Posted by Cathy Gatland at 1:58 PM

Here on the Jersey shore, we mostly have "cleats," which are squat pi-shaped thingies, to tie our boats to. I'd never seen a bollard, but I guess I liked the enigma. I hope they do accept it--wouldn't it be fun to puzzle all those people??

Not everything has to be spelled out in a painting, I hope! Let them puzzle over it - what could it be? I think this is fun, whimsical and just plain good! Love it! And love your flower/garden paintings, too, so much. A wonderful sense of dancing light throughout. I hope they all get in!

Good for you for plucking up the courage to enter your watercolors. I love the seagull and the juxtaposition with the crescent moon - which I identified right away, before reading your explanation. Hope you get your paintings accepted. They deserve to be.
Jean

C - I love your "Miro" - and I didn't really remember the word bollard, but am sure I've heard it before and immediately ASSUMED the banana WAS the bollard!! That was another Ginny, not me, that posted the comments about the bollard!! :D
I'm enjoying this one (Miro) more than the W/C - banana, crescent, bollard - whatever - its all good!

Laura, I knew you'd know it was something to tie a boat to, being a boating person - really I don't know what it's local term is - they may call it something completely different!

Rhonda, thanks, I don't think paintings have to be completely fathomable either.

Thanks, Jean - as you know Kalk Bay, it wouldn't be such a mystery to you - glad my sketches brought back happy memories for you!

Oh GPH!! I'm so embarrassed! How could I mix my sister up with another 'Ginny', and you've been 'Gillian' on the blogs for so long! Glad you like the Miro - it was more fun than the w/c!

That's interesting. The way I looked at it was that the colours in the second seagull image were more nocturnal and that was where the moon came in. Knowing it's a bollard kinda takes away the mystique! But then it gives it right back, because if a bollard can be a moon then the world is even more full of possibilities.

That's a lovely way to look at it, Becky - mystique and possibilities!