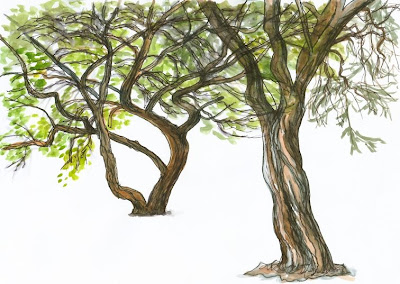 I've been sketching exotic trees up till 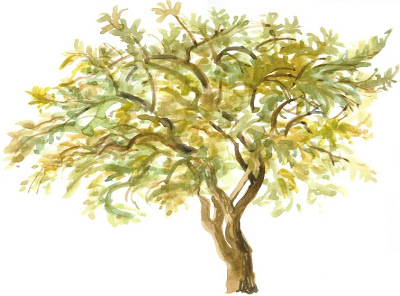 now - most of the trees at Emmarentia Dam and around the suburbs were imported from around the world and planted in an area that had few, if any indigenous trees a hundred and twenty or so years ago, being mostly Highveld grassland.
This morning I had a long wait in the car for my son, and was happy to find some acacia trees in the parking lot - I don't know their names, but someone once made an effort to have quite a variety of the species planted here, in an otherwise stark and industrial sort of area. So naturally I spent the time sketching them - boy, trees are difficult! I tried first with Pentel pen and watercolour, and then with just watercolour 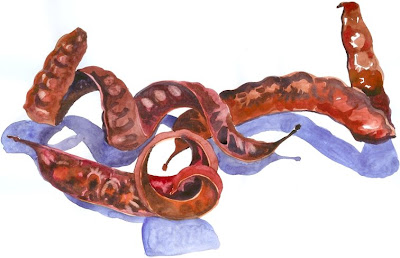 and the brushpen, which is a bit ungainly to render all those fine twiggy bits and feathery leaves. I meant to pick some of the leaves and pods to draw later at home, but forgot.
Instead I sketched the pods I picked up at the dam a few weeks ago, which I thought were from an African tree, but have since discovered are from a Honey-locust, which comes from North America. When I picked them up I described them as 'ebony', but actually they are rich shades of red and burgundy - I think I will be painting them again - better next time I hope, on proper paper with a proper brush. I'm getting a bit too reliant on that handy waterbrush!

Look at this beautiful poem sent to me by a dear friend, when she saw I was drawing trees...

'WHEN I AM AMONG TREES'
by Mary Oliver (from 'Thirst')

When I am among the trees,
especially the willows and the honey locust,
Equally the beech, the oaks and the pines,
they give off such hints of gladness,
I would also say that they save me, and daily,

I am so distant from the hope of myself,
in which I have goodness, and discernment,
and never hurry through the world
but walk slowly, and bow often.

Around me the trees stir in their leaves
And call out, "Stay awhile."
The light flows from their branches.

And they call again, "It's simple," they say,
"and you too have come
Into the world to do this, to go easy, to be filled
with light, and to shine."
Posted by Cathy Gatland at 12:48 PM

Lovely rhythm in the branches, Cathy. you don't make trees look at all hard.:) Just beautiful.

I would never have known your pod was painted with a waterbrush. Mine seem to let down too much water and that washes out the intensity of the colour. This doesn't seem to be a problem for you.

What a beautiful poem! And your trees are great, so alive and lively.

The effects you achieve with your 'ungainly' (definitely the right word) waterbrush are an inspiration! I will persevere.

Lovely post and paintings. I miss waiting for my grandson. I was able log many drawing hours just waiting for him.

I'm loving your tree sketches and paintings and especially the honey locust pods!

great wc of the pods! a strong feeling of 3D

Don't think the pentel brush is a problem if the results are as good as this :-)

The trees are really lively and lovely and the pods too!. Such a great poem The winterthorn, Acacia albida (among other names) so prevalent at RZL has these great apple-ring pods as well.
Mum had a book called "How to draw trees". Do you have it, perhaps?

these are really lovely and full of the individual character of the trees = and I like the change of scale, looking at details

I hope you leave a link to this on my tree challenge :>)
http://vivienb.blogspot.com/2009/06/paint-or-sketch-tree-challenge.html

Vivienne, hi and thanks:) - I believe that little book and the others - How to draw Children and How to draw Cats (all seminal in my childhood drawing development!) are at KB - must make a trip down there!

Vivien, your challenge is what led me to drawing all these trees... didn't realise I had to leave a link, but will do so, thank you!

Hi Cathy, picked up your blog from Vivien's Tree Challenge. Would like to invite you to join the Group "South Africa Plein Air" (http://pleinairartists.ning.com/group/southafricapleinair) on the network Plein Air Artists. Up till now I was the only South African on the site, but with the addition of Dianne McNaughten, we are now two, and if you join, that will make three! Vivien is also a member of that network. Would love to see you there. Your tree sketches are fabulous.

I just wanted to let you know about a new forum for artists as well as musicians, fashion designers, and filmmakers, http://www.PutItOn.com. As an artist I think that the mission is really great. The site gives you a free gigabyte of space for portfolio, there is no commission taken for sales, audio and visual works can been streamed in their entirety, you can create live personal broadcasts for your followers, and anything you write will be translated into 10 languages. So check it out!

I love the way you made the acacia! They are indeed so difficult to paint!! The pods are nice too! and I just loooove this poem! Thanks for sharing it!