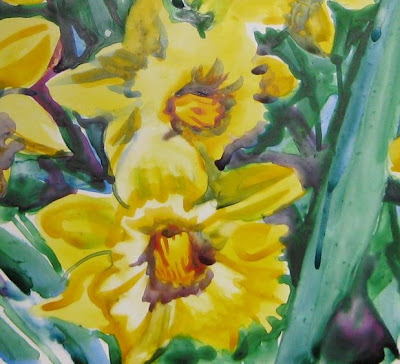 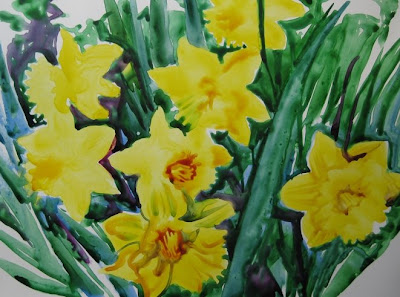 Yesterday was this blog's second anniversary, and I was planning to put something bright and beautiful up to celebrate, but nothing's going quite right here at the moment. Besides infuriating tangles with officialdom and red tape (I'm feeling great sympathy for the chap who held up a Home Affairs office until they issued him with an ID document that he had been waiting for for ten years!) it's turned from cold, to cold and wet, stymieing my plans to sit in the garden and paint these determined daffodils that have raised their cheerful heads in spite of the weather.

So I took a photograph and decided to try out, at last, the sheet of yupo that Rhonda sent me. I set about on my usual way of wet watercolour with loose brushstrokes... whoa!... things didn't go the way I was expecting them to at all. It is a whole new ballgame, and my rushed, impatient manoeverings of paint on the slippery surface produced some horrible mud. I badly need to go to some of Sandy Maudlin's workshops, be sat down and told to relax, take it slowly, investigate and take advantage of the special qualities which yupo patently has. The image on the left was taken before I added darks to the petals to show their forms, which was such a disaster that I've cropped it to a small section that wasn't quite as awful as the rest - I don't want my blog-birthday post to be ugglesome now do I!?

Actually, this exercise has demonstrated clearly to me that I am rushing through far too many things, especially as far as painting goes, lately. The positives that have come from A Sketch in Time have been so many - the community I've met, the sharing and exchanging of ideas and a common passion, the incentive to go out and draw/paint/sketch instead of... not, the examining and discovery of what really interests me and what doesn't, but, although it's now living up to its name far more now - lots more sketches of the moment and fewer old works - it's all got a bit frantic. So if I have a resolution for the next year of A.S.I.T. it's to slow down, take time to get lost, and hopefully found again - you'll be seeing how it goes!
Posted by Cathy Gatland at 1:59 PM

It's good to hear someone else took a while to summon up the nerve to try their new yupo. And it's even better to see how beautifully the part you showed us here turned out!

Happy Blog-aversary, Cathy! I think you did quite well with this - however, the simple color combo was sure to get you in a bit of trouble with the yellows running to the greens and the greens running to the yellows! So...don't worry (sounds like you have a plan already), take a break...then maybe wipe this off and start again. Use thicker pigments, less water where you want control...and then more water, less pigments where you want the paint to run and move and blend and make fun colors and shapes. Also when painting one color against another, make sure the first color is dry before going in next to it so it doesn't run. Have fun!

Oh Cathy Happy Anniversary! I think it was my one year one last month - can't remember. These daffies are great and what a different subject for you! Love your birthday resolution and I have no doubt that you will conquer the Yupo!

Belated wishes for your blog's second anniversary! I was talking about you with my husband over breakfast this morning, btw. I am so glad to have 'met' you and to have come to know your lovely, lovely work. I think I've said this before, but I understand perfectly the temptation to make art for the blog, as opposed to for oneself. In the end, nothing is lost. The two years of quick sketching will feed your longer, more contemplative work. I will be following along, as always, with great interest and lots of affection.

Well, thank you Charlene - it did take a while - and one of the great things about it as Rhonda points out, is that you can wipe off and start over, so no need to be nervous really!(except for all that W&N going down the drain :..( )

Thanks so much Rhonda - yes, I think a more carefully planned painting with slow build up of layers and colours is called for - it obviously is great for textures and granulation - I shall be doing more experimentation! I also don't think I should have painted anything while I was in a bad mood about the traffic department!

Liz thanks, and congratulations on your first blogging year too! I used to paint quite a lot of flowers, and when spring is hovering they're always a compelling subject!

Laura, I'm really honoured to have been discussed over your breakfast! You're right, absolutely nothing is lost - your current blog post puts it so well about the path that curves and meanders, and to be patient about creating our own story. Thank you so much for your encouragement and support.

Hi Cathy and happy bloggiversary. What a wealth of beautiful work you have treated us all to. I would like everyone to know that Cathy is as beautiful in every way as her work. She is strong and brave (she went white water rafting on the Zambezi on her 50th birthday), she's a wonderful wife and mother and sister and friend, and she loves her country through thick and thin.3 cheers and nog 'n pip for Cathy!

Actually Nell's comment cam efrom me, Vivienne, but she seems to have taken over the computer, somehow!

Oh it's you Vivienne!! I was thinking wow, Nell's lit upon her Aunty C in a big way & I had no idea she was so much into sketch blogs :-D :-D Thank you so much for your enthusiasm and always-ready support and cheering on - yes, the WW rafting was one of my finest hours and I'm still so glad I went for it! I'm very glad to have heard from you too, as I thought there's been a bit of a hush from Perth - but now fully understand that the computer-generation are home - I've certainly been no better at communications! XXX

Hey Cathy, I have something for you on my blog! Please check my blog..

Thanks for two years of entertaining reading & sketches.

Paint on & best with making the blog fit how you live.

BTW, charming drawings of 'the way you were' in the next post.

Megha, thank you so much!

Hi Adam - thanks a lot for coming along on the ride - its an ongoing puzzle how to make it fit. Not sure if I'll ever have The Answer!

These are lovely. Congratulations on two years of blogging. After three years of blogging I'm finally finding my pace, being able to work on quick pieces and things that take longer, but I do find myself always rushing a bit.