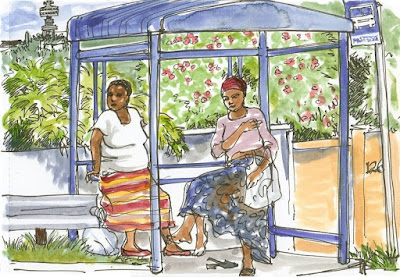 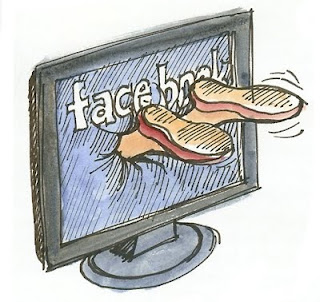 Oh my, I have been away a long time - I'm ashamed to say I have flagrantly flouted my resolutions and all but disappeared into the bowels of the internet. The reason - Facebook, which I've been very nonchalant, take-it-or-leave-it about, has suddenly delivered up for me a whole bunch of old buddies from school, art school, old workplaces... and I've just been in a time-warp. It's wonderful, and I hope to carry on keeping up with them, but somehow I have to find a way to do it without never leaving this seat ever again!

I absolutely had to leave it today, to do a few essential things, and took my sketchbook along for the much needed outing. The Joburg skyline has been slightly altered by the addition of a soccer ball to the Hillbrow tower - a little reminder to us that this is the year of the Soccer World Cup in South Africa, of which I'm sure we'll all be hearing much more about. 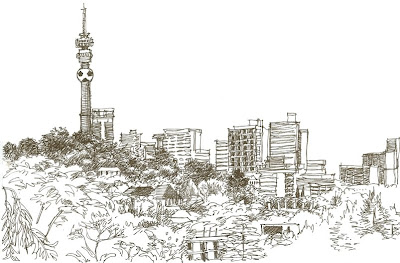 I passed two women sitting at a bus stop on the way home, and remembered that 'Buses and bus stops' is the theme for this weeks Urban Sketchers Flickr discussion group, so did a turn around the block so I could sketch them. 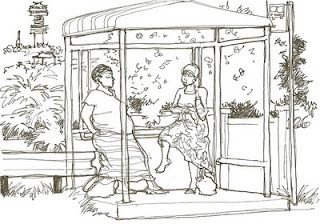 Their bus took a long time to arrive, lucky for me but not for them, as, feeling very out of drawing practice, I had time to do two sketches. I added a bit of colour later at home to the top one, which improved it - this one I posted on Urban Sketchers, just as I did it on site. I have a soft spot for bus stops and their patient occupants. I did this bus stop painting some years ago, and had people clamouring to buy it, the only time that's happened to me!
Posted by Cathy Gatland at 7:42 PM

I've been reading your blog for a while; just want to say that I love your sketches.

Lucky us as well, that the bus didn't show up and you had time to do two of your terrific sketches! But that poor lady on the right appears to be becoming quite agitated swinging her right leg back and forth...

Oh those patient bus travellers! You've caught them perfectly. And as for that soccer ball! How on earth did they put it on that tower!!

That leg was swinging quite slowly and rhythmically Charlene - just thought I'd try and catch the action!

Liz, I have no idea - I wish I'd been looking when they did that!

One would never know you've been Facebook surfing, Cathy - look at all these wonderful sketches! I also love your 2007 painting of the lady at the bus stop.

I hope you get around to developing this latest one into a painting. Lovely idea for a series.

Cathy,
Love your woman waiting for a bus, especially the one woman swinging her foot with her shoe off.

How do you feel about hosting (not you personally) the world cup in the summer? I remember reading an article in the news about how South Africa has to get its internet abilities up to snuff. Someone conducted a test and a carrier pigeon actually transmitted information from somewhere in East Africa faster than sending it on the internet!!!

Carol - (I thought you were an Italian commenting until I followed the link!) the bus stops are probably designed to discourage graffiti - they don't even have seats, just a pole to prop yourself on.

If you ask my husband that question he'll give you a list of cons as long as your arm - I know that carrier pigeon story, huge files do take a while - they've been laying fibre-optic cables, building roads and bus lanes, a new trainline from the airport, and lots of new stadiums (hope they don't sit empty for the next 50 years!) - lots and lots of activity, I hope its good, and that people come and have a great time, and that everyone benefits, not just a select few... how do I feel... is a big question, hopeful but nervous! (and it'll be winter here, so anyone who's coming, bring warm stuff!)

I realized as soon as I hit send that I had typed Caro and not Carol. I hoped you'd figure it out.

All the travel shows here are promoting South Africa as the "new" travel destination, but they do warn that travelers should go after the World Cup. Plus Americans don't really follow soccer, so what would we know anyway.

I know when the Mayor was trying to get the Olympics to NYC, pretty much EVERY native NYer was against it. We have enough crowds, I don't think we could have dealt with so many more people. On the plus side, my husband would have had tons of OT!

I sent that carrier pigeon article to another blog friend in S.A. and he went on and on and on about Telkom. (that's the right name, yes?)

OK. I've taken up way too much of your blog comments. Looking forward to your next post.

I love your sketches of the bus stop! I entirely share your liking to bus stops! So cool for us who want to sketch!!! Waiting people are great! I've been meaning to sketch women queuing for their bus but never got round to.
Happy new year to you! I haven't been trapped by facebook but still didn't get much chance to browse my favourite blogs, and I've missed so many things! This new year has only just started and I already feel behind...

What beautiful sketches and paintings. You have such a lovely touch and eye with your art. Have enjoyed looking at them.

I'm going to enjoy following along with your sketches. Nice work.

Good to see your bus stop sketches, C. And I'm sorry I don't have the lady in yellow from a couple of years ago hanging on the wall here. Lucky person who owns it was in the right place at the right time! FB is a huge distraction, isn't it - in a good way most of the time. AND I'm now addicted to watching that live Webcam of the hummingbird on her nest...

I love the these colourful drawings - full of life! And such stories that go with them. It's a pleasure to come across your site!