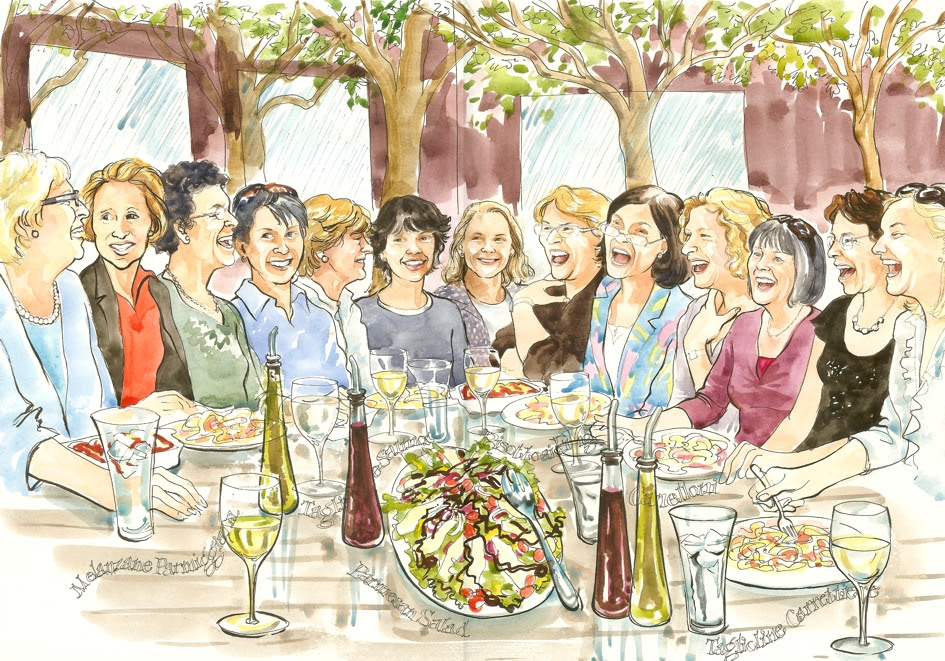 Hooray! At last I've finished the illustration job that has taken a large chunk of my time over the last six or seven months. Here's a sketch of my friend Jill's lovely birthday party that happened back in November to celebrate. In fact, I didn't sketch at the lunch - I planned to, taking paper and pens - but, I just can't manage talking, eating, drinking, laughing and sketching at the same time, so I took photographs, and Jill's friend Jan took photographs and I drew from those.
It no longer is a sketch then, you start fiddling with arranging and moving elements around instead of composing on the spot. Some faces came out bigger than others, and some seriously didn't look like anybody there, so I had to scan and cut and paste, eventually printing out the manipulated line drawing on sketchbook paper and putting watercolour onto that. I'm aware that it resembles da Vinci's Last Supper arrangement of figures, especially since I had to stick my rather bemused face in, for the record, at the opposite end from where I was sitting. I suspect this is the only way you can fit so many people (13!) on one landscape format - so it was entirely unintentional and not meant to be sacrilegious, so don't start trying to work out who's who! But it was a GREAT party, so much fun - I put trees and windows in because soon after we'd sat down under the trees in the sunshine, clouds gathered and rain started bucketing down - we were herded under the roof and the tarpaulin sides were let down and the celebrations continued very happily.

Have I figured out how to post a larger size picture on here? I'll find out when I publish this! I hope it doesn't take too long to load. Let me know if it does and I'll make it the usual size.
Posted by Cathy Gatland at 4:41 PM

Goodness, that's brilliant, Cathy! My jaw hit the ground when I opened the image in my google reader. I know it's what you do, but you do it brilliantly! Everyone is going to want a print of that. So clever. I'm sure the likenesses are very good because I recognised you at the end of the table in a second before I read the text.

Oh, Cathy! This is awesome!

PS - From where I sit, the image did not take any time to load but I only see 3/5 of this image on this blog post. When I click once on the image, I'm immediately redirected to Flickr where I see the entire image. My 2¢.

Gee, thanks Robyn:) It is a present for the birthday girl, and she recognises everybody, so that's the main thing!

Hi Suzanne, thanks for your exclaimation, and your 2c - much appreciated! I see if my window isn't full-screen, then I can't see the entire picture either. I just thought this would be pretty unreadable the normal size that Blogger allows, so glad I got it to go big.

Gosh, Cathy... my eyes widened when I saw this and I wondered if you realize what a wonderful artist you are. This is great! I LOVE IT!!!

This turned out great, Cathy. Not a Last Supper at all, more a Laugh Supper (who can resist bad puns?)... You really captured what a fine time everyone was having, which. looking at the end result, was the best thing to focus on!

Great picture. hank you for taking the time to explain how you did it, and I'm glad you took the time to eat and enjoy your friends' party.

Teresa, you are very kind, thanks!

Thanks Sue, yes, I'm glad too - I wouldn't like to have missed it, with nose in sketchbook.

No doubt about it -- this is a sensational painting of wonderful people having a wonderful time! I'd like to be the first to point out that your presentation of the food and drink is perfect as well.

Now you have to share how you got the picture so large on the blog too!!!
I LOVE this and you are all have such a GREAT time.

Cathy, The only words that can excape my mouth right noware Just beatiful. How proud are you on the great peice. I know I'am.
Linda

Oh, this is beyond fantastic!!!! I saw YOU right away, of course---the likeness you captured of yourself tells me that the other figures must be perfect captures, too! I've never seen a birthday gift as wonderful as this one!

Wonderful Cahty, I love it. The food the faces and the fun. Wish I were there.

Thanks everybody for your enthusiastic comments!

Ginny - you need to open a Flickr account if you don't have one already, and post your picture there first. Then click on 'all sizes' above the picture, choose the size you want - an HTML code will come up in the window beneath the pic - and you just cut and paste that into your HTML window on your Blogger post. Voila!

What a great remembrance of your friend's birthday. I don't think the attendees had that much fun at The Last Supper!!!

I'm totally in awe of this! APPLAUSE...

Oops - I haven't looked at your blog for a few days and look what I missed! The drawing from the photo is clearly not as satisfying FOR YOU, but for us following your blog it's just GREAT! Happiness leaps out of this posting - and that salad looks yummy. I hope all the ladies who went see this.

Thanks GPH :) I think Jill sent this to all who were there - I'm trusting nobody minds featuring on ze blog if they do come and visit!

What a great painting. The birthday girl is very lucky to have a friend like you. (Can you come to my birthday party next year?)

BRAVOOOOO !!!!!
I can feel the joy of the characters!
This really is a beautiful work!
Congratulations
Best Regards