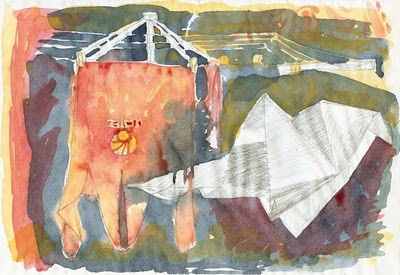 An oldie from my studio sketchbook - my washing line again (isn't it fascinating?) and an origami dove hanging in my window that I sketched, then tried out a watercolour combination of Naples yellow, Cadmium red and Indigo over. It's coincidental, but I rather like how the sweater looks a bit like origami too. I haven't been able to sketch or paint this week, not because of Facebook this time, but because my textbook illustration job has returned - the absolutely final last set of drawings, all of us who have been working on them dearly hope. It's been so hard to make myself sit down, concentrate and draw and digitally colour them, having mentally set the end of 2009 as the end of that job. Once I get going, it's not so bad!

Exciting though, is that I've just squeezed into a four day workshop with the wonderful Hazel Soan, in March, thanks to a cancellation. The Watercolour Society of South Africa managed to persuade her to lead two courses in Johannesburg and Nelspruit and I'm looking forward to the opportunity to learn from someone whose work I've admired for a long time. That should give my watercolours a shot in the arm, especially turning them from sketches into finished paintings, I'm hoping.
Posted by Cathy Gatland at 12:20 PM

Oh, lucky you! I'd love to take a workshop from Hazel Soan :) This will be such a treat and you'll have to tell us all about it. I LOVE this image - I think you have something here that could be worked on larger and play with the colors and shapes and see what you turn out :)

I've been coming across old sketches, etc., too, as I catalogue and properly archive all my studio work from the past several years. The bits of work from previous incarnations turn up and I'm reminded of the details of another place and time.

My trick for sitting down to do something I'm avoiding is using the egg timer! I set it for 15 minutes and by that time, I'm into the project. it works every time.

Yes, it is fascinating -- that you could make such a delightful composition out of stuff that's hanging around. And thank you for the introduction to Hazel Soan -- beautiful work, and (I think) a lovely attitude.

Sure glad you're in the final stretch with that text book -- we've missed the on-going graphic novel of your life.

I do like this sketch, Cathy, gathering unexpected elements together.

I'm very excited about your course, you will love it as much for the stimulation of the students as anything. Maybe you can gather the beginning of your sketching group there. Looking forward to hitching a ride on your trip.

I do feel lucky Rhonda - I plan to take notes, photos, tips etc at the workshop and share them here. I think I will be playing around with this image - soon I hope...

Suzanne, the egg-timer sounds like an excellent idea - I would also like tips on how to catalogue and archive from you!

Thanks Charlene - all reports I've had are that Hazel is an extremely generous teacher - looking forward to it!

Robyn, that did cross my mind - a good chance to meet some possible sketching buddies as well as the learning experience. Thanks for being excited too :)

Yes, VERY origami! I like how the dove shapes are repeated in the quadrangle of the washing line structure. Speaking of origami - have just tried to make a clever folded paper heart from one I got at a wedding. It is so simple, yet I keep missing a step. Have put it in the drawer till I get over this present frustration. ;(

Oh you lucky girl! I adore Hazel Soan's work and her approach to watercolour. So fresh and alive. So delighted you plan to make notes/sketches to share with us. Roll on March. Have a great time and meet new buddies.

Beautiful shapes and colors! Lucky you - a wrkshop with Hazel Soan! I have one of her books and I love it. You are going to learn so much!

Hey, Cathy. I'll be happy to share tips on how to catalogue and archive. My first tip is to set aside at least 5 times more time than you think you'll need! Email me whenever you like!

Wow! You're lucky! There doesn't seem to be many workshops in South Africa, I'm a little disappointed, but then maybe I just don't hear about them...?

I'm adding my 'how lucky you are' to the rest of the group! I'll bet you have a wonderful and productive time at the Hazel Soan workshop!