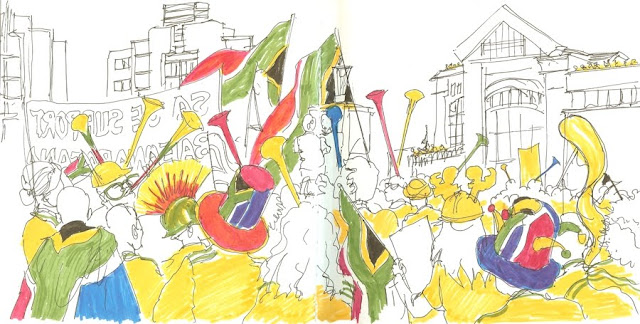 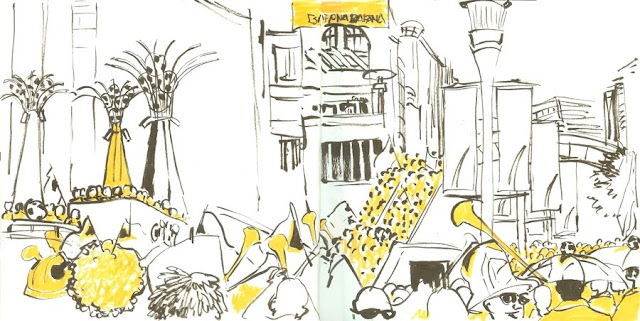 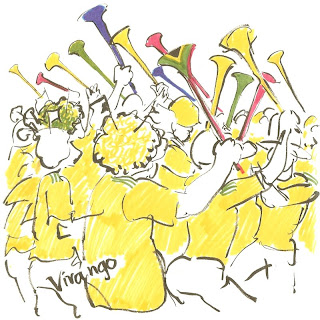 Yesterday the United We Shall Stand parade swamped the streets of Sandton - tens, maybe hundreds of thousands of people came to show their support for our team, but also to celebrate the fact that the World Cup is here, and demonstrate just how incredibly happy we are that it is. A sea of yellow jerseys interspersed with the South African flag colours, bouncing, throbbing, swaying - accompanied by the deafening, but sometimes reasonably melodious when played well, sound of vuvuzelas, and the odd kudu horn. Groups burst into song and dance, gathering new fans eager to learn the words and steps. The buses eventually made their way past, carrying the press and Bafana Bafana to rapturous greeting. What a wonderful day and spirit of everyone pulling together for this once in a lifetime event.
Standing up and sketching in a lively crowd like this was challenging to say the least, and I was squirmy as some came to peep over my shoulder, all I seemed able to make were illogical scribbles - and I do apologise to viewers and the architects for my buildings! I floundered with my pens, abandoning the fine Pitt pen halfway through the second sketch for the bolder Pentel brushpen and I gave up on colour until later at home, though I did it as fast and sparingly, with Pitt colour pens, as the quick sketches warranted. I'm feeling rather beholden to record as much of the World Cup activities as I can for Urban Sketchers, as there doesn't seem to be another sketcher attending. I'm not a huge soccer fan - though I'm certainly coming round - and I haven't even got tickets to any of the games. If anyone who draws anywhere in South Africa (Liz? Maree? Marie? Debbie? Cathy?) would like to attempt to capture some of the World Cup action, please do - you can share them on the USk Flickr site, or Facebook, or email them to me at catgat at mweb dot co dot za (small files) and I'll post them for you - bear in mind point #1 of the USk manifesto:
We draw on location, indoors or out, capturing what we see from direct observation. - not from photographs or memory.
Posted by Cathy Gatland at 5:19 PM

Cathy, you have made my day... nice to see someone attempt to capture the 'Gees' of the special day here in Sandton. I drove to the outskirts, but decided I'd get lost in the hustle and bustle. I Personally I don't have tickets to any of the Games, but my hubby and boys do.
Lovely narrative too. Thanks for sharing this!!!!

My oldest and dearest SA friend just posted this on her facebook. Informative and entertaining! South African World Cup for Dummies http://fab.sa-people.com/2010/06/04/south-african-fifa-2010-world-cup-for-dummies/

Wonderful sketches with a huge feel pf what you were seeing - and hearing.
I do hope all goes well for the whole of the world cup while in

Wonderful feel of what you were seeing and hearing.

What fun! How loud and busy and full of life and you're right in the thick of it - thanks for sharing :)

These are amazing Cathy. I like the buzz of World Cup even though I don't like the football much and these certainly capture the excitement.

Thanks Debbie - even if you sketch bits of 'gees' around Joburg would be good...can't your boys take up sketching?;)

Thank you Penny - I've also been having strange things happening with comments. I will delete your 2nd one because it made a lo-ong empty gap on the page somehow...computers!

Thanks Rhonda - glad you can hear the racket!

Sue, thanks - everybody is getting pulled into the atmosphere here, whether you like the football or not!

You have captured such enormous spirit with these sketches... I can HEAR the crowds and the vuvuzelas(heard thw word for the first time a while ago...my sister says is can be quite scary sometimes!) Great sketching...and though I'm not football fan either, I loved seeing this spirit capturing of yours and yes, it would be great seeing more world cup sketches out there!
Rnell

Wow! This is making me get in the spirit! I thought of you knowing the games were starting. These are so colorful and capture the feel of what's going on. Thanks for the tour!

Wow. i can feel it! Amazing depiction of all the fun and games going on all over South Africa - thanks Cathy

Now it has started and it's a bug, there are a couple of petitions online to ban the vuvuzela from the World Cup. Here's one:
http://www.petitiononline.com/2010WC/petition.html

These are wonderful. You have captured the excitement and life in your drawings. Wonderfully done!!

Hi Cathy, I'm going to publish some your skatches on http://sudafricamondiale.wordpress.com. An italian weblog about the Wolrd Cup. (I will link your blog). Can I?
Best regards.

Hi Ronell - I guess they could be scary in a stadium (like swarms of angry wasps I believe), but were just good natured on this occasion!

Thank you Jill and Pat:)

Stefano, sure, thanks for asking.

And Suzanne! Thanks so much - and for thinking of me!

I think your buildings have exactly the right amount of detail -- recognizable, but providing context only -- for these incredible action shots of the nultitude.

What lively and colourful sketches! They are really great! And this is something we can all share as most people are hearing nothing but footie at the moment! I admire the fact that you have sketched what would look so complicated to me :0)

Wonderful sketches, They are really great.

Great job, Cathy. I can't imagine trying to capture all that motion and so many pieces in one sketch. My hat's off to you!

P.S. You did a great job with the color too.

I was SURE I'd commented here but can't find it---I love the liveliness of line and color here. You really captured the energy and excitement around you. Wonderfully fun sketches!

What exciting sketches! But those horns would make me crazy! LOL!

Great sketches, Cathy! I've been meaning to sketch some Soccer World Cup scenes, but I'm so busy at the moment that the days fly past and I haven't done anything! I'm not a soccer fan either, but I don't think it matters for these sketches, it's only a matter of noticing the festive atmosphere... Ok, I'll try and include that on my list.

all your world cup sketches are great cathy