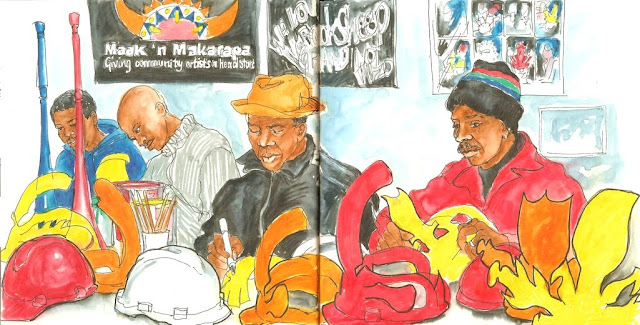 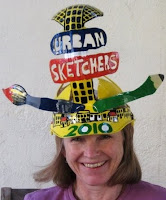 The World Cup is over, and South Africa is a bit deflated at the end of a magical month. It has flown past and I'm already feeling regret for not having got out and sketched as much as I would have liked to - but on Saturday I went to Melrose Arch where I'd heard supporters of the teams in the final were gathering. There were a few fans wandering around, but I found this 'flash shop' - just open for a short time, where township artists were making makarapas, the iconic converted miners hard-hats that have been creatively worn to local soccer matches for many years - first created by one Alfred Baloyi after watching a bottle flying through the air during a match in Soweto. Makarapa is the Xhosa word for migrant workers in the mines. They've been a huge hit with tourists, along with the raucous vuvuzela (pleas for the banning of which have fallen on deaf ears, ha ha) and these men have turned out many of them. At the shop you could design your own makarapa and they cut it out for you, and paint it, though they were so busy that I painted my own design of... tah rah... an Urban Sketchers makarapa!! Lucas, the man in the middle of my sketch, loved it and is thinking of doing a city themed series. While waiting for it to be cut my husband and I had lunch and I sketched the busy piazza outside. I'm sorry I couldn't get near to the final match or the stadium, but... Congratulations to Spain!

Posted by Cathy Gatland at 9:29 AM

What fun and what lovely vibrant sketches.

I love this post Cathy... And I LOVE your Makaraba, so unique! I went to Melrose Arch one evening and the vibe was electric! Didn't see these guys though, pity!
Your sketches are beautifully done, full of life and vibrantly painted .... all that detail!!!! Great memories to preserve!

Viva South Africa for a great World Cup, I'm glad to have been a part of it!

You have such a gift of bringing city life so alive Cathy. I think you should do another book of your World Cup sketches - South Africa in all her finery! Thank you for keeping the memories alive! And yes, well done Spain.

Love the bottom sketch. What a fabulous record of the World Cup you have.

Wow--such wonderfully vibrant, colorful images to let us see what it was all like there. Amazing--really wonderful the way you captured all this. Love the hat!

what wonderful illustrations and thanks for sharing stories about the goings on at the world cup. Love the hat!

Your sketches are so vibrant and full of life, Cathy! And I love your Makarapa!

What a wonderful, joyous post, Cathy. Brilliant sketches! I love the concept and execution of the hard hat too.

I love your work cathy - so alive!

Thanks for this interesting message and beautiful sketches! I feel just like you, frustrated not to have gone out more to sketch. The month has flown too fast!!!

Another great bunch of "sketches" - you call them sketches, I call them paintings, even if they are small inside a sketchbook! ha ha
Love the miner's hat - now you've started something. I think you must have to be South African to enjoy the constant horns but the bright colors of everything from hats to banners to clothing is fun to see and I'm glad you helped us see it through your eyes.

You are an amazing illustrator, Cathy! Love how you take in the city. I hope my comments re your ostriches went through, I'm not sure that I took all the right steps!