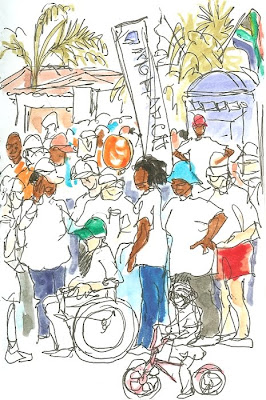 Yesterday, at last, after watching and sketching from the sidelines in previous years, my husband and I took part in the annual Walk the Talk, now the biggest sporting event in the world with 50 000 participants. We only did the 5km route, which was so easy and pleasant, we wished we'd registered for the 8, or even the 15km one - we're fitter than we thought! This is the third time I'm blogging about this event, which means A Sketch in Time is almost three years old! I sketched at the starting line, thinking I might try along the way as well, but it was hard enough staying with my husband, so I only took out my sketchbook again at the end, where a band was entertaining the crowd, and there was a climbing castle for the children. I added colour to these afterwards - the original line-only ones are on Urban Sketchers. 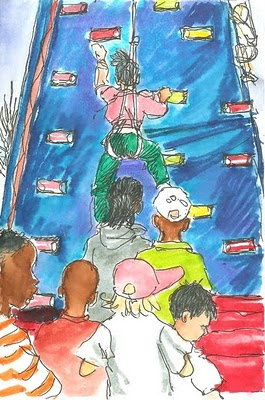 I painted a little watercolour study later of the lady in red and yellow -  she was having a great time dancing to the 'Golden Oldies' music the band was playing, but then a man who was watching over my shoulder asked if he could show his friends, and proceeded to show everybody who I'd sketched, including her, which I'm afraid inhibited her for a bit after that. 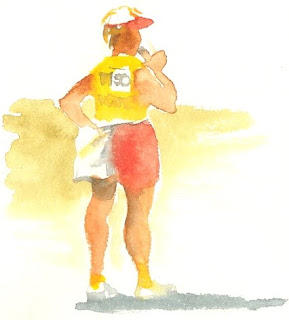 Posted by Cathy Gatland at 3:48 PM

Well done on the walk Cathy! Did you meet our ex-First Lady on the way? She sounded great. And thank you for these great sketches of the event. You really bring what I heard on the radio to life.

Can't blame the guy for wanting to show this picture to everyone who was in it, and I'm sure they were all pleased with the way they looked! (Probably the reason that lady slowed down was because Golden Oldies can be exhausting, don't you know) I know I'd love to be in one of your sketches!

you are amazing at drawing crowds. And good for your for doing a 5K, isn't it nice to know you're in better shape than you thought?

I would have been HORRIFIED if someone took a sketch pad and started showing it around. At least your sketches are REALLY GOOD!

Ah... you're an example to us all! That world cup really thrust you up a notch with crowd sketching agility. It may have forced you to loosen up a bit while allowing your own nervous system (style) to shine through even more. Now, look, that is a comment on utter subtlety - your crowd sketching has always been great, I just personally notice a slight shift. Congrats on your anniversary. The blogosphere is far richer with you in it!

You really are good at capturing crowds--I agree! Whether the crowds are people or ostriches!

Thanks Liz, it was fun - I didn't meet Graca, unfortunately, but my husband got his photo with Shaun Pollock!

Welcome back Charlene - hope you had a great trip, will be checking your blog very soon! I know all about golden oldies - hectic exercise!

I was horrified Carol - wish I could just be invisible sketching in crowds!

Great sketches! It helps me to feel the day. I am so glad you are feeling healthy. What a treat and to have sketches too. Magnificent day all around!

I thought I was going to make an original comment by saying I love the way you sketch crowds but I see I'm not the only one! Wonderful. Love the lady in red and yellow too.

I always enjoy your lively and colourful sketches Cathy! So full of life!

Fabulous, Cathy. I so enjoy the panorama you always present--it seems all types are represented--you are a gifted observer and artist!

I do so love your sketches and congrats on doing the walk.

Cathy, I am so impressed by your keen observation of people. You really understand "the human condition" and are able to express it in your sketches. Look at the body language, wow!

I love how you have captured all the people waiting to run and standing around, wonderful!!!