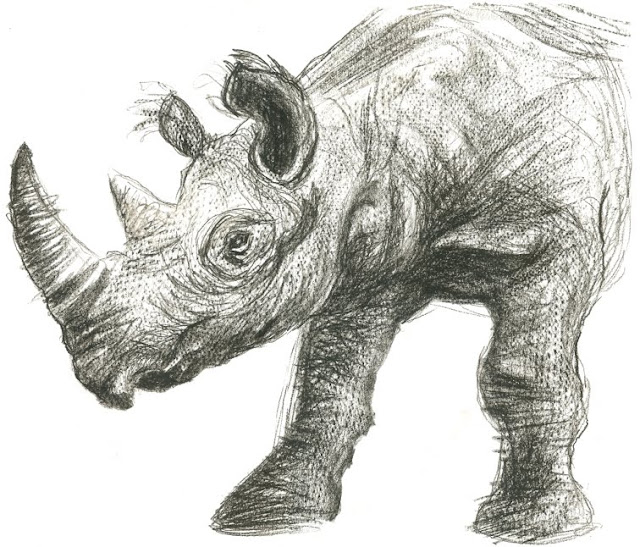 Today is World Rhino Day. Here in South Africa we have as a nation, been horrified by the increased wholesale slaughter of these creatures for their horns - a chunk of keratin, no more, no less -  over recent years. This year alone 210 of them have been poached and the population has declined by 90% since 1970. I was in Zambia five years ago where we saw the very last white rhino left in the country, being followed at a distance by his personal armed bodyguard to try and protect him. I wonder if he's still alive? Game rangers and conservationists have resorted to removing the horns to try and prevent their destruction, but the animals are often still shot for the stump that has to remain intact for them to survive. In some cultures it is believed that the horn has medicinal properties as a cure for cancer, and as an aphrodisiac. 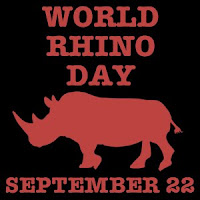 A brave oncologist in Malaysia has recently spoken out against this myth - as he says, you may as well chew your fingernails...
The good news is that this week police have arrested eleven people, including two vets, two safari operators and a professional hunter whom they believe to be kingpins in a rhino poaching syndicate that has been relentless and professional in their killing, with more arrests on the cards. But as long as the demand continues, somebody else will doubtless step in.
Thanks for reading - not sure what good it will do, but the more aware people are I'm sure, the better.

Here is a link to an article about who uses rhino horn and for what purposes.
Posted by Cathy Gatland at 2:13 PM

Humanity's inhumanity never ceases to amaze me and saddens me to learn of the rhinos and their plight - due to a stupid superstition!!! From rhinos to beluga whales, it seems nothing precious is safe. Getting the word out is a good thing. And your sketch is wonderful...love the swirling markmaking in this one. Thanks, Cathy!

What a powerful drawing -- and what a reproachful eye!

Well done for sketching this. I am deeply saddened by the whole issue and hope the authorities throw the book at these killers!!!!

A beautiful sketch, Cathy, and a very disturbing story. I hope all of the efforts at education and preservation will help.

Thanks Rhonda, yes, how these delusions begin is a puzzle!

Hi Vivienne - such a gorgeous trip to the Cape, and that breakfast sans electricity was excellent. What a clever plan about the cane toads - we need to spread that rumour...:)

Thanks Charlene, Dinahmow (you must be in Aus... whoever started making purses out of the cane toads was ickily creative! I've added a link to a good article about who uses rhino horn)

It is beyond belief, Debbie - and they're out on - what for them is peanuts - bail!


Thanks Debbie D - I hope so, you wonder if the culprits ever get to hear or care about what most people are so concerned about.

Amazing drawing Cathy I hope the publicity helps the cause.

Your rhino drawing is very powerful and thank you for sharing the information on World Rhino Day and the article as well.

I have only seen rhinos in a few zoos. I have always hoped some day to visit some of the african countries that have large animals. When and if that day comes, I hope they are still around for me to admire and shoot (with cameras only!!!!!)

A super and powerful sketch for World Rhino Day, Cathy! The use of rhino horn as an aphrodisiac is based purely on the fact that the horn represents the shape of a male organ! How to erase stupidity like that?

Ah Cathy, this has indeed been a sad state of affairs. And finding vets involved is very scary. What a wonderful sketch of an incredible animal. Part of our declining African heritage.

A beautiful drawing as a tribute to these amazing animals. I'm appalled at what goes through the minds of some people...animal cruelty and senseless slaughter is criminal and maddening!

I loved the Rhino...
is kind is coming out a black hole..or a white wall...
Check also my blog salvoejana.blogspot.com

I saw the pictures on the front page the other day, and I saw the rhinos with their horn sawn off in the parks... what a mess! I had mentioned it on my blog a while ago, thanks for doing it also, but as you say, I'm not sure it will help the rhinos...

I missed this splendid drawing when you posted, Cathy.

As for the poachers - unbelievable in the 21st century isn't it!