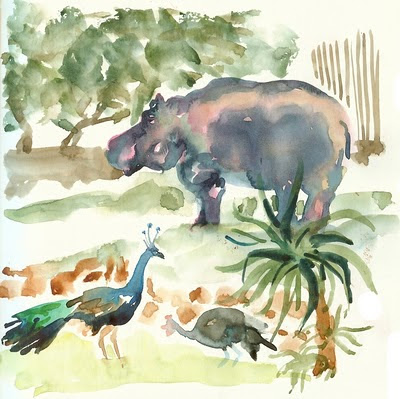 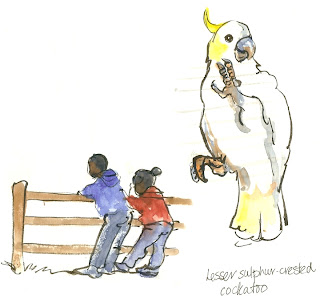 A day at the Zoo for our sketch group yesterday, always a visual feast, though most of the models will not hold still for even a moment. I spent too long walking around deciding where to start but at last, sat in front of the hippos and in a bit of a flap, pulled out my watercolours and began with all the wrong colours. Close to me were a peacock and two guineafowl having a non-stop go, taking turns to peck and harass each other. I felt like going over to sort it out, but I guess that's how they spend their days, with or without me.... 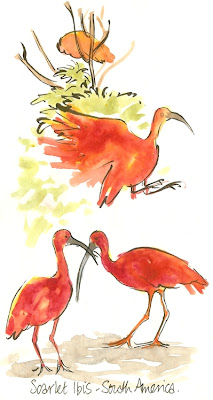 Then across the path to some brilliantly coloured birds, but first there was a sweet cockatoo gazing at me with fascination, and seemingly posing on the bars, even starting a conversation with a gruff hello (must have been someone's pet), so I drew him with my brushpen and a touch of colour. On to the the luminescently orange Scarlet Ibises - no ways could I get that colour on paper - then the elephants, who though they seem to move slowly, can one minute be right in front of you, and the next are small grey lumps on the horizon, so I didn't get very far with them. 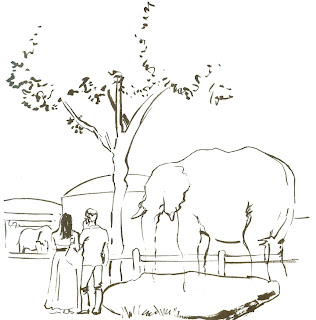 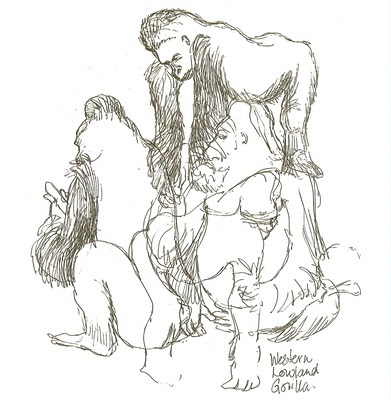 A break for lunch with the group and a look at what everyone else had been doing - one of these days we'll get a Joburg Sketchers blog going - then a couple of us wandered down to the apes. Most of the cages were unoccupied for some reason, but we found the enormous Gorilla being fed his lunch. This was one guy who just tugged at my heartstrings, in his large but lonely enclosure. He should be in the rainforests of Central Africa, perhaps if he were, he would've been bushmeat by now... but I don't think he realises his luck. 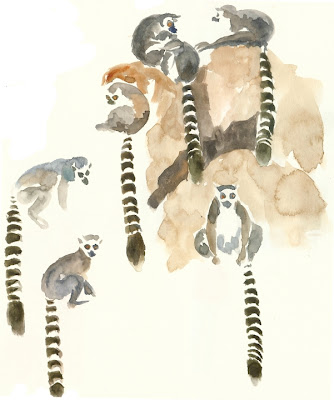 And lastly, the lemurs, engaging and paintable though endlessly active creatures. They've obviously featured in a movie lately as many of the children who saw them rushed up to them in delight yelling something about King Julian..? Well I've just looked it up and it was 'Madagascar' - I'm sadly behind on animated movies now that my kids have grown up (though my 19 year-old did come to Toy Story 3 with me!)
Posted by Cathy Gatland at 8:52 AM

These are wonderful sketches -- and with all the right colors!

What a fantastic day of sketching, Cathy. You already know I love that hippo but the lemurs are delightful too, particularly the ones that have their eye you. All enviable memories of an outing at the zoo.

Fantastic sketches, it feels like I was there too!

These are such wonderful loose direct observation sketches! You must have had a terrific time.

Fabulous sketches Cathy. The cockatoo and lemurs are perfect. Why was there a ladie in Victorian dress by the elephant - both perfectly drawn btw.

Re. animations, you don't need children to see them. I drag boyfriends or rent them for nights alone... hmm wonder if that's why I'm alone.

Wow! Somebody was enjoying herself! These are all really just terrific!

You had me as soon as I saw the hippo!!! Love it. Then on and on and so much beautiful work and then - the lemurs and those tails! You are amazing - you get so much character in so few brushstrokes.

These are delightful. The rhino is brilliant--the prettiest rhino ever--and I love the lemurs: just charming--their tails definitely make a design statement!

I love these all! The lumpy Hippo, flashy Ibis, our lowland brethren and ab fab lemurs (super wc sketch). The outline of that elephant is superb! Lots of love (I've been a stranger) from your gimpy friend.

Oh Dear Cathy... why am I not seeing your hippo's and lemurs on your blog like every one else?????? I wish I could have joined you on Sat as I think you can get a real perspective of these wonderful creatures as well as enjoying a relaxed setting. Will think about it during the school holidays...... hope you plan another 'zoo' trip soon!

Fabulous day of sketching! You're practising like hell before Lisbon!!! All your sketches are amazing! And you did so many! I'm sorry I wasn't able to join you; was sick all weekend!

Hello.
I started to write blog in English.
I will write about everything, will be a lot of pictures, reviews of books, films, songs etc.
So it would be nice if you visit my blog sometimes :)
(Sorry for mistakes, I'm still learning English)
http://bianchii.blogspot.com
(you can follow me)

Beautiful, wonderful sketches of the animals.

Thank you everyone for your responses to my day at the zoo - it was a lovely sketch outing - and sorry I've taken so long to respond, I'm still flapping!
Sue P - the ladie was in a strapless, sleeveless long summer dress, don't think the Victorians would've approved:)
Laura, I saw the tails from a distance away and thought, wow, gotto sketch that!
Suzanne, I had to look up 'gimpy' - hope your foot is much better!
Debbie, I don't know... I'm not seeing images on some blogs either :?
Cathy, sorry you were sick! Hope to see you next time.