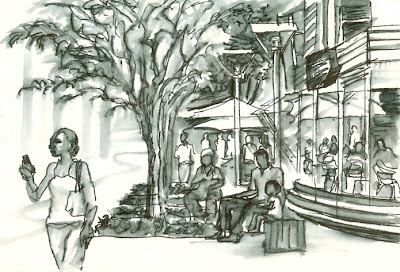 Thought it's time I practice some fast people-sketching, while trying to take note of how I do it, so that I can pass on some tips to those who will be joining me in Lisbon at the Urban Sketcher's Symposium. I was very happy to hear that we will be paired with a Portuguese speaking person who knows Lisbon well - and that my person is Isabel Fiadeiro, the other out-of-Africa (though far away from here) USk correspondent, who already feels like a friend, and who also knows the ropes of a symposium from last year's in Portland. 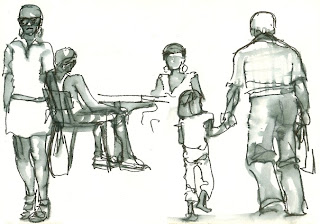 Yesterday four of us went to Rosebank's Zone II, a new pedestrian mall to find some shoppers and al fresco action. I decided to restrict myself to a black water-soluble Pentel Signpen with waterbrush for quick tonal values and to try and fit in lots of loose-ish sketches. 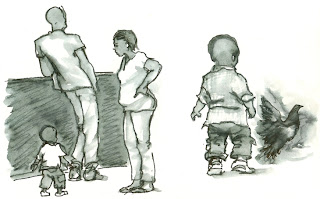 I attracted two chatty onlookers, both very interested and interesting, so I ended up not doing as many sketches as I'd planned to, but had good practice in trying to talk and draw at the same time, something my left and right brains don't usually co-operate on too well. 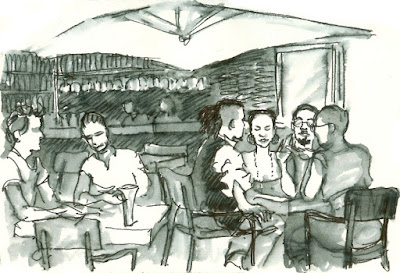 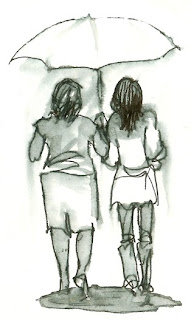 I must say when I look back at when I started urban sketching and how nervous, to the point of shaking, I got at the prospect of being spotted while trying to sketch people 'live', I've come a long way! There are still some who are patently uncomfortable being observed and sketched, and others who are delighted and even pose, but I've learnt to remove myself from their reactions, unless I suppose they come over and ask me to stop, I carry on regardless...

At times, while I was drawing these sunny carefree scenes, I tried to imagine an enormous, catastrophic, unspeakable event descending over our lives as has happened in Japan - beyond imagination and my thoughts and prayers go out constantly to everyone affected.
Posted by Cathy Gatland at 5:25 PM

Cathy - These are super! Your 'students' at the symposium are going to learn so much. Lucky them!

My gosh Cathy, I've had an eye feast going back through the posts I've missed! You are an amazing artist - it is wonderful to see all these slice of life from Joeys. And thanks for pointing me to the Virtual Paintout this month!

I wish I could take the symposium... I do love your sketches

Wonderful inspiring sketches and words. I share your sentiments about Japan.

Stunning sketches Cathy!!!!!! I'm impressed as usual! I can feel you worked a little quicker than usual, or is it an impression? Wonderful silhouettes and movements! It's all very loose and relaxed! Great job! I'm sorry I couldn't come and join you. Until the very last minute I thought I would, but no... Next time I hope!

What a beautiful post, Cathy. Your sketches are wonderful--you really captured the essence of that place; I feel like I was there with you. You're so good at this type of thing. It does my heart good to learn that YOU were ever nervous sketching in public places. As for the events in Japan, I have been feeling much the same way--I cannot even fathom how they go on. It must be impossibly difficult. I am once more reminded how very fortunate I am. I ache for the people of Japan, and I'm amazed at their dignity throughout this horrible ordeal.

These are lovely Cathy.

Great work, the values do all the work for you since there are no colors and you nailed them!!

Superb, as always. As much as I love color, it's also refreshing to go back to black and white--I always forget how beautiful a scale of grays can be.
You make a good point, too, about getting practice not only with your art but conversing with onlookers!
I, too, can only use half my brain at a time!

Ah... You're in fine shape for Lisbon!

Wonderful, Cathy. Your Lisbon sessions are going to be a sell-out! I particularly love the two girls under the brolly.
Japan - never out of my thoughts.

What wonderful people sketches Cathy..I so envy your students!!

These are fantastic! It's so cool to be able to "see" your day :)

aaah, that's the one signpen! Heck! I saw it, but wasn't sure it was the same one. damn, I'll just have to go back!
Funny how I could perfectly remember the sketches you used it for but not the object itslf!

Cathy, you could use various options for water-soluble pens... most fountain pens would work, and other felt-tips like Pilot fineliners - all the pens that many avoid because they bleed!