It's been a long time! My apologies and thanks to all who have left comments over the last few posts, gone mostly unanswered, though not ignored - I have read and appreciated every one of them.
I thought this year would be a slow, relaxed stretch of time for sketching and painting, now that my son has finished school and no longer requires as much taxiing around and motherly ministrations (wrong about that too!), but it has spiralled into a maelstrom of activity. When I started this blog, it was partly to motivate myself to make art regularly - in that respect it has succeeded, and then some!

I mentioned some time ago that I registered for a year long course with artist and lecturer Greg Kerr. Four sessions of four days each, spread over the year with the surprise addition of plenty of homework in between. We're half way through that now, having just completed the second session.
The first entailed preparation of sourcing our own images through a programme that Greg and other university lecturers developed called 'The Dark Cloud', from which we made large charcoal triptychs.

Each panel is a full sheet - of Arches hot press 300gsm in my case - at the moment being displayed in the David Brown Gallery in Nelson Mandela Square in Sandton with eleven other student's work - a credit to Greg's teaching that all the work is so different, individual and good! It was chosen not on any merit system but merely those who had finished and submitted in time.
For homework we had to make 24 very small images from cropped sections from the source material photographs - I still have 6 to go (relieved to find we weren't in for detention or a rap on the knuckles for non-completion!) 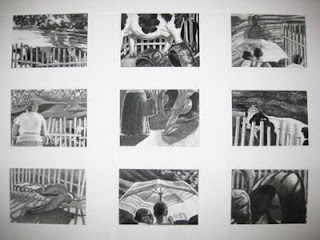 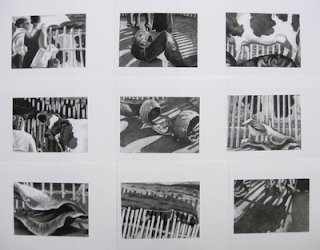 These are on A6 sheets of Fabriano, with the images 120x85mm, and are meant to force the charcoal to be as photographic in nature as possible. When all are done, to be bound into a book form.

In the second session we took three of these tiny images and blew them up to large canvas size to make tonal studies in acrylic paint, with added interest of thin coloured edges - I left some areas of the canvas showing the coloured underpainting, with lots more thinking and work still to be done on them - very much work in progress.

I began the first full-tonal range panel on a big canvas - 1000x800mm but switched to smaller 550x750mm ones for the high and dark toned ones after I'd spent the first day filling in between the lines. Not sure where these are going yet, but I have no doubt there will be surprises in store the next time we get together in August for oil painting.


A big advantage of a course spread out like this over a period is that you learn to live with your work, think about and develop it, as well as the discipline of returning to it - to become a habit by the end of the course, instead of the workshop becoming a pleasant, but dim and distant memory - at least that is what I hope happens.

But wait, that's not all I've been doing! In between this was another short watercolour workshop that I'll write about soon, the Urban Sketcher's Symposium rushing up and needing attention - some preparation under my belt but lots more to do - a workshop that I've just given on sketchbooks and art journals, the lovely postcard exchange which deserves more time and effort... how did this all land up in the same year, I'm sure it could keep me going for five!
Posted by Cathy Gatland at 2:45 PM

These are absolutely fascinating images!! I'm so happy you are learning and growing and expanding so much - I see some great things in these already and know more will come. Blogging is not life and it seems your life is pretty full without it so we'll be patient for times when you have something to share and the time to post them. These were well worth waiting for!

Sitting here with jaw hanging open at all you've achieved, Cathy. Such beautiful charcoal studies and the paintings are going to be awesome. Congratulations! I think the pacing of the workshops is such a great idea.

How wonderful, Cathy! Now I miss Art School, and also suddenly remembered that art is all about problem solving! You are doing wonderful and are on your way to becoming a wonderful artist!

These are excellent Cathy, I hope you will post the finished pieces, it looks such an interesting process.

Fascinating process ... and results! And what a lot of work: I'm awed.

This is so interesting. Thank you for sharing.

Rhonda thanks for your understanding! Life sure filled up lately, but I do miss my blogging buds.

Thanks Robyn, I'm a bit amazed myself after thinking I'd never get through all those little charcoals!

Marie, in both workshops I've been on, that's what the tutors emphasised. One of these days I'm going to have to stop doing workshops and go it on my own :)

Thanks Cathy, I will post them when finished - whenever that may be!

Hi Laura and Sue, it is interesting, a very different approach to painting, thank you!

These are wonderful Cathy, gosh, you are a busy lady!!!!!!! We don't mind waiting for your posts, as we know eventually, we'll be rewarded with interesting news from you!
I think as artists we never stop learning no matter how good we are. All this must be so exciting for you no matter how demanding.

HI Cathy, it's nice to hear from you! I always love your posts so much! Not only because of the works you show, but because of all the things you write, and the way you write them; it either rings a bell within me, or it just makes me smile or laugh. Keep going!
Wonderful and interesting works you're showing! I just love when workshops take you to unfamiliar (and sometimes uncomfortable) place! I'm also looking forward to the next stage of this work!
Don't worry about being too busy, if it can be of any help, I've been very busy myself, and had very little time for answering the comments on my blog too!

What an intriguing process--thanks so much for sharing your work in progress. It is beautiful and evocative. Thank you for inviting us to visit it as it unfolds. Blessings to you as you continue to bring it forth!

Cathy I just love your posts! They are well worth the wait, I also am really enjoying this long process and seeing the work develop. I like the way you had to crop different elements out of the original, very interesting compositions you have! Love taking this journey with you!

Super work Cathy. Interesting seeing you plug into a different creative stream and yet the work is so recognizably yours. Thanks for sharing the process. Greg sounds a great and generous teacher.I hope you are enjoying your school holiday!

Thank you Cathy for sharing your experiences at this stunningly good programme. I'd loved to have been alongside and working with these clever ideas of developing the first pieces. All is forgiven when we see how much work you have been committed to.

Argh, I wrote replies to you all, Debbie, Cathy, Jan, Desiree, Vivienne, Joan... and blogger lost them. Thank you all for looking and commenting, glad you're enjoying this process!

Fascinating stuff, its all a learning curve and you certainly are using what you are learning.