I'm still depositing sketches from my trip while I'm catching up on other things at home, my neglected painting course and a little spring cleaning included... 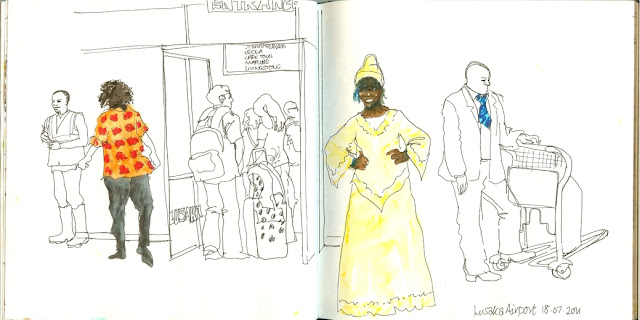 We had to leave the Zambezi River a little earlier than the rest of our group so I could catch my flight to Paris and Lisbon. We first spent a night in Lusaka in the Ridgeway hotel which is managed by an old friend. 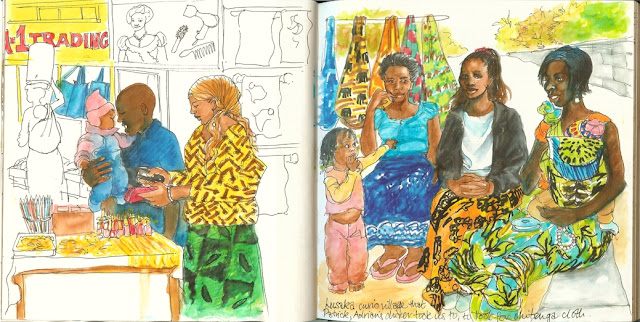 He kindly arranged for his driver to take us into town for the afternoon so we could look for some colourful local chitenge cloth to take to our daughter in France. Patrick waited patiently while I scribbled down a sketch of a little street scene, and then again at the curio village - after having been persuaded to buy some of their wares - a group of women who bead and sew and hope against hope that someone will come along to shop. 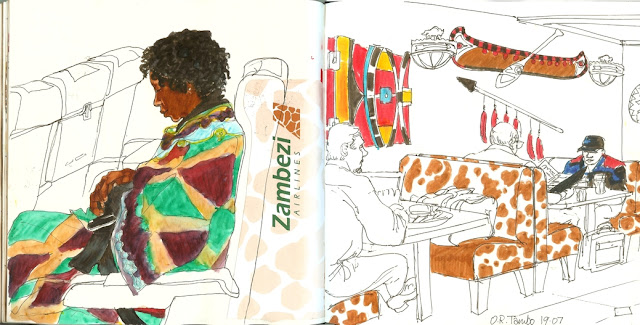 Early the next morning we caught our flight back to Johannesburg, where I had a swop of suitcases and a long wait for my flight to Paris. 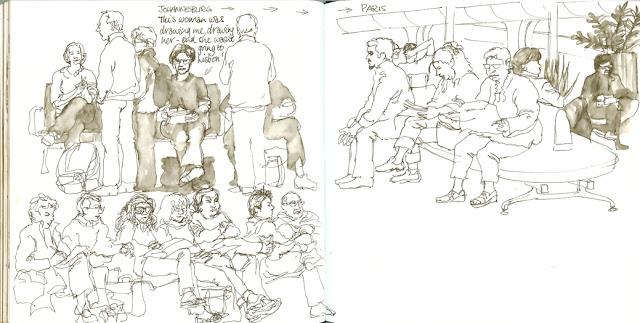 Nothing like sketching to while away the time, I started on a long line of people sitting and waiting for our flight to be called, and came upon a woman who was... sketching me!! I thought she had to be going to the same symposium that I was, and when I finished, went over to ask her, but no, she was just passing the time.
One last airport scene in transit in Paris before the adventure in Lisbon began.
Posted by Cathy Gatland at 12:02 PM

Love your people sketches, actually this whole blog post was a feast of colour and faces. You had a wonderful time and I have enjoyed seeing it through your eyes, and sketches.

What a great sketches, Cathy!
Love them all, specially the woman in the plane
Wishes! :)

wow!! Cool stuff, check out mine.. very different from your work.. Love your stuff!

Wow! what an incredible post. Your colours seem to have got stronger with more contrast and the pen line work is a delight. Wonderful moments in time - what a well travelled lady you have become!! Wish I had the confidence to tackle so many people at once!!

Thanks Penny, AnAis and Paulo (Hi!good to have you visit!:) and Joan - the colours of Zambian people's clothing are so vibrant against mostly neutral backgrounds, I just had to bring out the bold hues!

I can't say it enough I love your characters, and figures. You get the expressions so well. Love it. Keep inspiring us

You bare my hero when it comes to sketches.
Some ofnus are involved in the 75 day sketch challenge.
It's my hope I could grow up to be just
Iike you!
See challenge details on my Aug 13 blog post.
Http:// ginny stiles.blogspot.com

I love your people sketches, too. These are just great!

Just WONDERFUL! I do love your drawings and sketches. Thanks for sharing. Marie K., from France

wow, so colorful - love these and all your sketches.