A Slow Start and Slow Painting 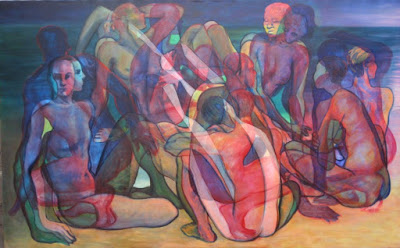 I'm having very frustrating computer problems at the moment - technology stuck in the last decade - so can't scan or web browse. It's gone for an overhaul and I hope will be back in action soon. I'm using an even older slower machine, which I'm likely to throw out of the window if I try to do anything too complicated, so I've found some images in the hard drive that I haven't shown here before.

This is a painting I've been working on, or should I say agonising over, for 15 years or so. It started out as a completely blue painting of five figures, which was cold and boring - so eventually, after years of pondering, I superimposed another version of the figures over that with some colour (below).
After learning about glazing last year, I sketched in different poses of the figures with a red oilstick, and glazed layers over, trying to abstract it a bit more. In the version above, I added some digital lighter shapes which aren't in the actual painting... yet... who knows how it might go over the next fifteen years. I can't see it objectively any more. If it weren't such a big canvas - 122cm x 76cm - I'd scrap it and call it a day.


I haven't made any ambitious resolutions, but I do wish you all a wonderful, productive, creatively fulfilling 2012, heavens, there are only 11 and a half months left. At least I get to spend more time in my studio when computering is so painful - if I had made resolutions, that would be one! 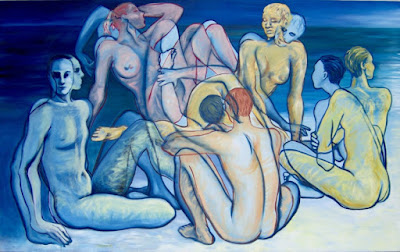 I hope you never throw this away, it's a beautiful painting, the more you look the more there is to see. Hope you get your computer back soon!

I like this too - keep going now matter how long it takes :>))

Coming in as a printmaker rather than painter...I can see the great contrasts in the "red" one. But I do like the blue version.
Seriously, if I had wall space I would consider either.

Love what you have been doing to this original blue figure piece - but over 15 years. Surely you mean you get it out of the cupboard about every 5 years, take a look at it and add some new technique you have learned, then put it away again for another 5 years!! Well, however you have arrived at this final stage - its brilliant. HAPPY PAINTING IN 2012.

Hi, Cathy,
Wow, great challenging! Very impressive work. I really hope you can make it this year or sometime in the future. Go, Cath!!
Cheers,Sadami

What a fascinating painting; the duplicating, turning shapes seem perfect for a work that has evolved over time.
I love the warm colors you've added and the depth of all the layering!

Gee, I love the two versions!! What a great idea, they seem to be moving, but slowly, it is a busy scene, but nevertheless it looks calm!! How do you achieve that?? Oh, I know, fifteen years of pondering! ;-) My advice would be "Stop changing this one, it is perfect as is it; start another one, with the same idea that you'll push even further". Honestly, I love it!!!

Thanks everyone for your thoughts, you're right Joan, that's more or less how it went. Right now I can't see what else I could do, so this may be it... though I haven't added those light shapes yet!