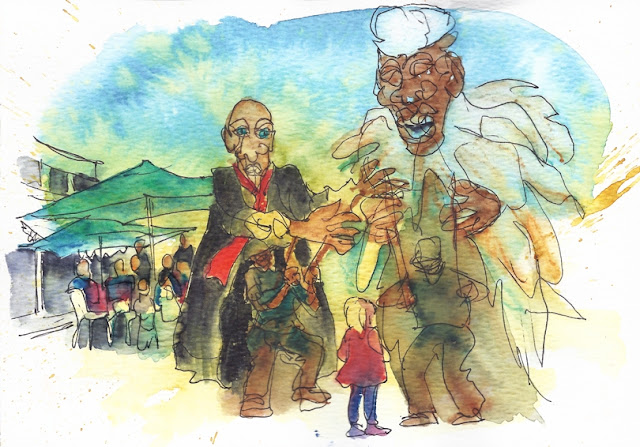 Last Saturday we went to sketch at the French Fête de la Musique in Melville, where 7th Street was closed to traffic, restaurants and cafés overflowed their tables, chairs and sofas outside into a beautiful warm, sunny day and a free and easy atmosphere took over as three large dancing puppets started the festivities. 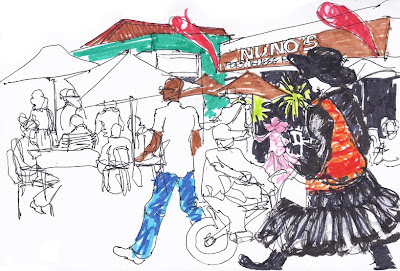 I thought there was to be a brass band and had prepared a sketchbook sheet at home with watercolour washes to draw over - thinking the yellow splashes would be a good base for a brass band to burst forth from into the blue. Well there was no brass band and the puppets pranced past so quickly, I hardly squiggled down their outlines before they and the drummers behind them disappeared down the road. I'm feeling the urge to sketch in different mediums lately - this first technique was more successful than others... 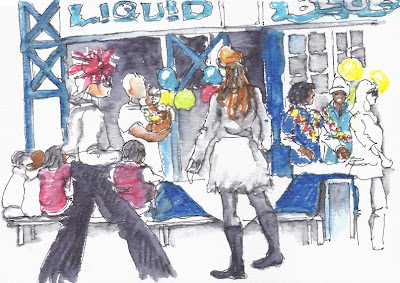 ...my next sketch (above) I tried Carioca markers in a sketchbook that didn't allow them to wash and spread with water as I intended, so onto different paper that did... as did the disposable Pilot Vpen, which I love using for its watersoluble properties, but hard to control on the trot. 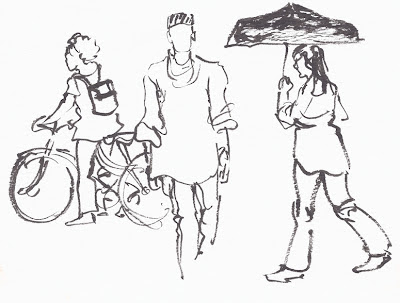 I managed to capture my daughter (with her back to me, above) a proud new resident of Melville, then I pulled out my Pentel Pocket Brushpen for a few more figures as they dashed past - so much activity, this was not a relaxing sketching experience! Perhaps when I go sketching I should just take one pen with me to stop myself trying to use everything in my artillery and feeding my indecisiveness and confusion. 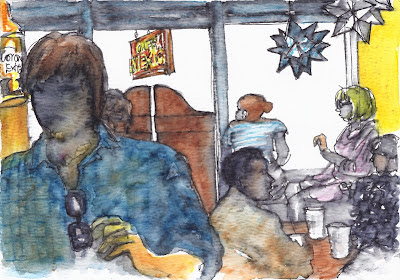 Having lost the other sketchers in the crowd, I joined my family for lunch in a Mexican café, fitting in another sketch while waiting for the food to arrive. I had done a fair sketch of my daughter's fiancé - a good likeness, dark in tone against the light outside - but later at home I thought I'd 'fix' it and really messed it up, saturating the paper with uncontrollably bleeding colours and pens, dabbing didn't help and I lost his face completely. Lesson: do not fiddle with sketches after the fact! 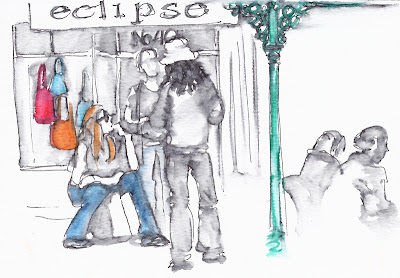 A last sketch before home, rather wishing I was younger, trendier and more energetic to carry on eating, drinking, sketching and listening until late to the great variety of music pumping from every doorway up and down the street.
Posted by Cathy Gatland at 2:42 PM

Fabulous sketches. What fun to experiment, but I'm sorry you feelyou ruined one by fiddling.