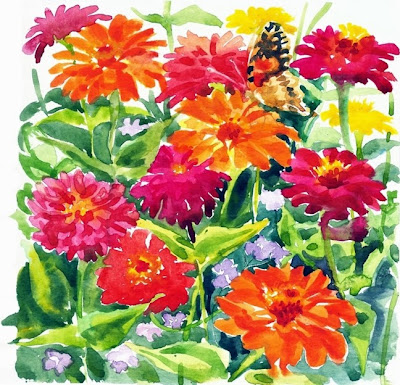 Happy New Year to everybody! With the hot colours of the zinnias now flowering in my garden, at last we're getting some proper summer after a cool, drizzly Christmas. I've been pondering where to, what and why for this blog. Posts have been becoming decidedly fewer and farther between - although I've been doing stuff, I just don't seem to have the time I used to to scan, edit images, write (which always takes me forever) and post. So as useless as I am at keeping new year resolutions, I think I'll make a list of Mores and Lesses to guide me through the year, and I hope it will mean more updates, with less time spent on this chair...so!...

I'll probably think of other things but that'll do for now, as I've been sitting here too long already. Wishing YOU a very productive and creatively fulfilling 2014!

Cathy, Good work!! Happy New Year! May 2014 will be a wonderful and fruitful year for you. And please be kind to yourself.
Best wishes, Sadami

Erm...planting that wisteria might just eat into some of your "new" time. Well, if it misbehaves as mine does!
But you and Joan Rivers are right.
I love your zinnias!Happy art year to you.

Thanks Sadami, Shirley and Dinah - uh, yes - my wisteria after two seasons is already needing plenty of ladder climbing, training and pruning back - whew, but so pretty!

Happy New Year to you too, Cathy. Your flowers are beautiful considering it's winter here and very cold, they are nice to see.

I like your "more" and "less" lists and think they are all good things to do more and less of.

Happy New Year to you too.

These are beautiful flowers to start the year with.

I like your lists. It amazes me how people find time for scanning and tweeking, I'm permantely behind.

Less sitting - adopt a puppy :) Or I could lend you Degas.

Great and an very facinating post to check on this awesome blog! Almost never write any replies only now i just did not resist
games onlin for ipad

Thank you Polly, ammi roy and Sue...yes, my ancient dog is now very content to lie next to me while I sit - a puppy would be a shock to both of us!