We went sketching on Saturday in the Maboneng Precinct, an area on the East side of town that was once a no-go but which has been mostly reclaimed from crime and urban decay by private developers who've built galleries, shops, studios and restaurants . It was a nightmare getting there and back, as much of Johannesburg was experiencing one of our now frequent power cutting programmes, trying to save us from total blackout in the near future - so all the robots (traffic lights to you in the rest of the world :)) were out. A few of us managed to make it all the way there, and once our jangled nerves were calmed, we found a lot to draw - the most interesting being the street life and characters. 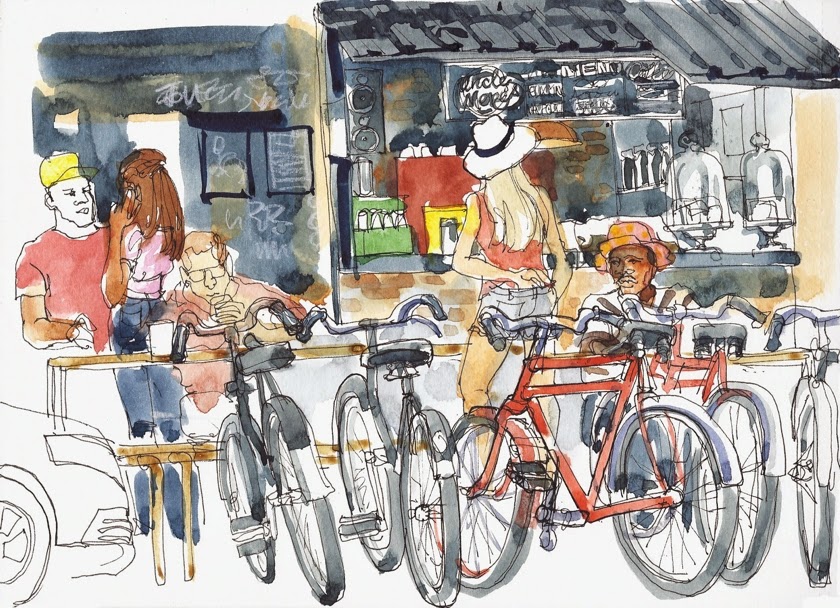 Uncle Merv's serves coffee and smoothies and hires out bicycles if you're brave enough to take on the taxis, jaywalking pedestrians and other surprises. 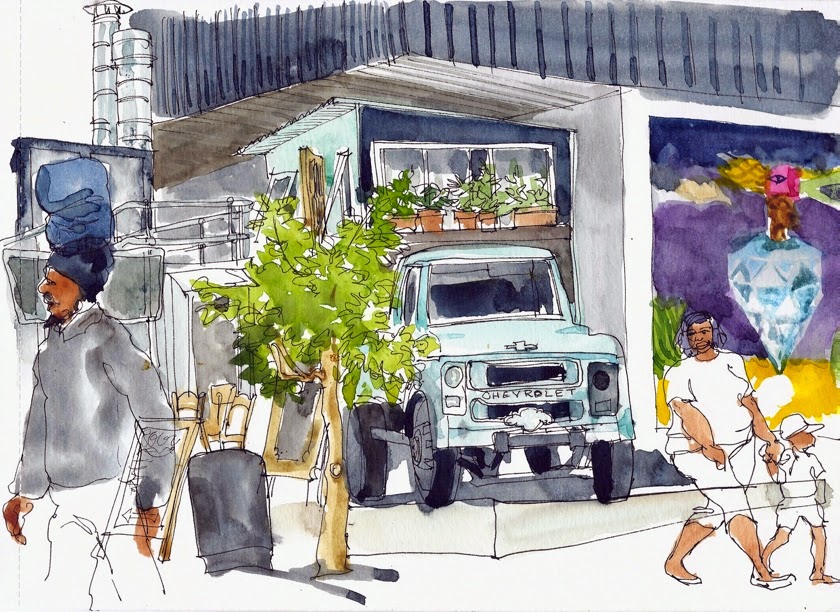 A different kind of Food Truck - an old Chevvie with a container on the back serving customers on the pavement. I had two little boys accompanying me for this one, first gleefully setting off firecrackers all around me till I complained, then sharing the tyre I was sitting on (lost my little sketching stool) one very helpfully holding my palette for me. 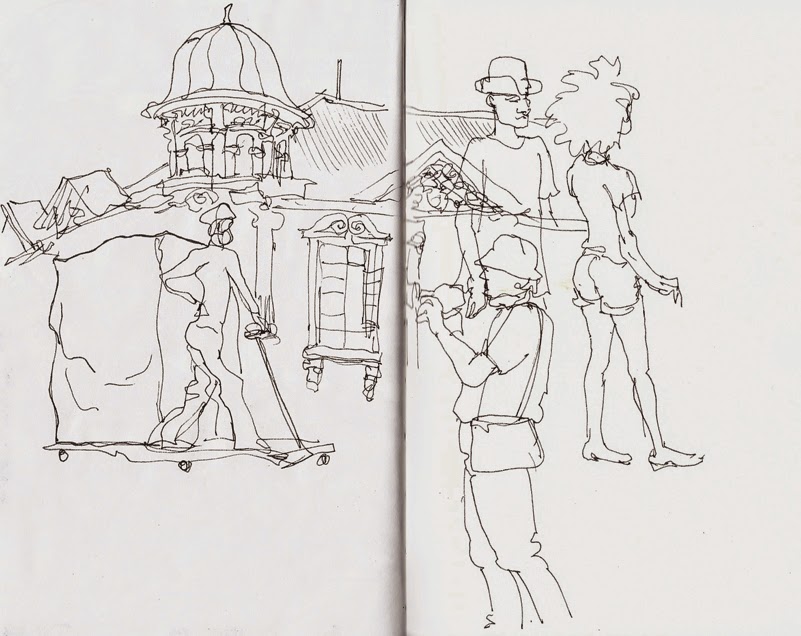 And a last few squiggly sketches of passersby - there were so many interesting characters wandering past, and a beautiful old building in a bit of a sad state that I wanted to sketch but couldn't spend the hours that it would take me. The squiggle on the left was a recycling collector surfing expertly past on his home-made trolley with his huge sack of plastic behind him - SO fast downhill on his tiny wheels - one of the surprises you wouldn't want to collide with on a bike!
Posted by Cathy Gatland at 3:48 PM

Feel like I am there with you. Great sketches.

Oh, Cathy, you always give that little bit more than a sketch! Character and humour, like "robots."

These are great and I love the biker ones too.

You know I joined your blog because I have always wanted to draw. Your sketches always inspire me to take this creative pursuit but only to fall short in my lack of confidence in my own abilities. The patience and the visionary purpose required is a talent I wish I had but I am content in marvelling at the beauty and skill in the craft of others. Thank you for sharing your sketches. I love spending time and observing the emotional ambience your sketches generate.

I love the way you make us share your sketching outings!!! We have the sound, the heat (I guess) and the siuation all complete thanks to your words and sketches!
... and I can well imagine Joburg with all the robots off! Nightmare!

Thanks everyone - Martine, Polly, Dinah, Sue, Cathy - for your feedback! Williamz JJ - if you want to draw, please do it! I'd recommend you look at Danny Gregory's site http://dannygregorysblog.com/ to be encouraged to draw, come what may... maybe join his Sketchbook Skool... everybody starts somewhere and finds their own way. I'm very happy my sketches inspire you, thank you!