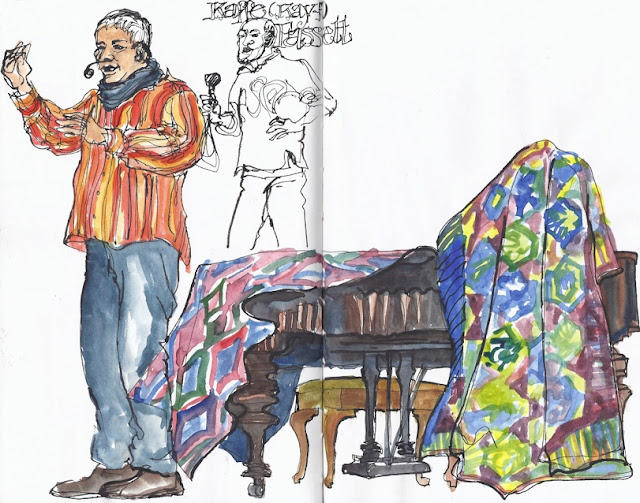 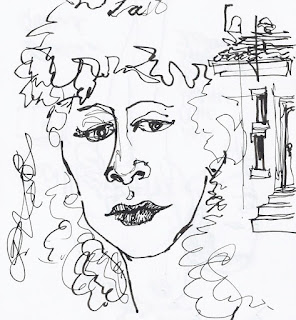 Do you know who Kaffe Fassett is?
Only one of the world's most innovative and flamboyant colourists and author of many lovely books on knitting, needlepoint, quilts, interiors - anything you can imagine where Glorious Colour and design can be flaunted and overindulged. I've been a fan since the 80's when I first discovered his beautiful knits and books, so was astounded to hear from my fashion designer daughter that he was coming to a local fabric store and giving a talk in the church hall, to which she had bought tickets.

I packed a tiny watercolour palette and my new Hero bent nib calligraphy pen - a dear friend's son had bought it for me at the factory shop in Shanghai. It had travelled halfway round the world and was finally delivered from Cape Town via another kind friend on Sunday.
We found a front row seat where I had plenty of time to sketch the grand piano draped in quilts. Eventually Kaffe's studio manager Brandon Mably took the stage to introduce the man himself, and we were treated to a fascinating peek into his world of travel and colour, illustrated with a slide show of images from his next book. He did a book signing afterwards, and I thought of asking him to sign my sketch, but decided he might not enjoy my less than flattering rendition. At 77 he is still a very beautiful man!

I'm slowly getting the hang of my new pen. It can make a range of line widths by changing the angle at which you hold it. It works better and more predictably on smoother paper (as in the doodles on the right), but is great for expressive strokes even in my rougher sketchbook. Think it'll inspire me to get back into action and out of a rather arid sketching phase.

Posted by Cathy Gatland at 1:39 PM

I am wearing a light green tinge in envy of hearing Kaffe Fassett speak.
And I think it's a lovely sketch.

Wow, how amazing! I've been a fan since the 80's too so I can imagine what a surprise that was! You must be incredibly inspired - I'm so envious!

Oh, I forgot to say how wonderful your sketches are, to capture so much with all the details and colours you must have seen!

Hi Sadami - not sure about masterpieces, but will try, thanks!

Thanks Dinah - he's obviously well known far and wide, I'm sure your shade of green is lovely ;-)

Hi Felicity - I wonder if you've made any of his designs, your quilt I saw was so beautiful. He says he prefers it when people use his designs as inspiration rather than follow them slavishly, but what colour sense he has!

Thanks for the interesting post and love sketch of Kaffe. That man is NOT AFRAID of color!

Hi Cathy, I must have been a fan as long as you were, and there are still scrapbooks at home with magazine cuttings about Kaffe. Thank you for this love post and sketches!