The War Museum and a Park 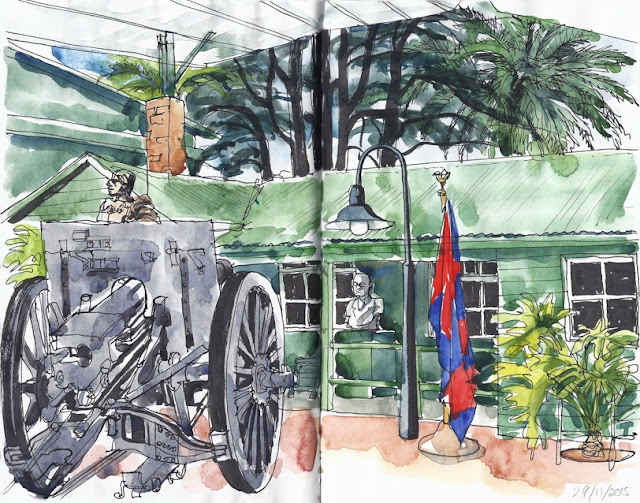 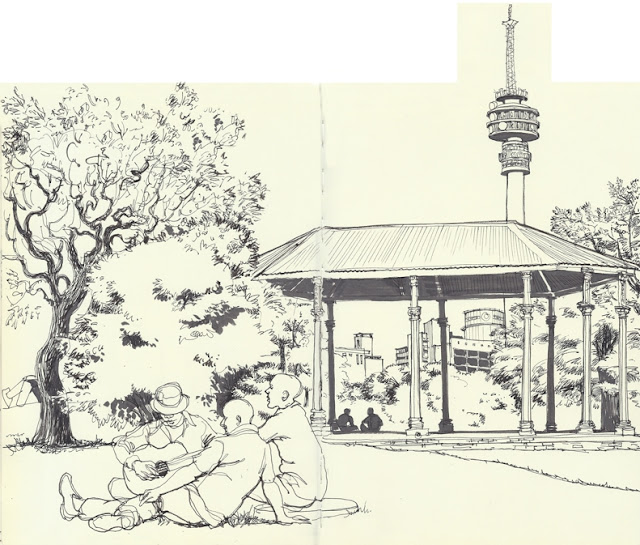 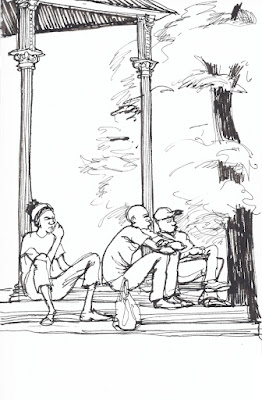 Skipping around from one thing to another, I returned to some urban sketching after rather a dry year... I just didn't get out much. I met up with friend and ex-Joburg Sketcher Barbara Moore at the Museum of Military History on Sunday and we sketched and nattered in the shadiest courtyard we could find on a scorching heat-wavy day - we've had too many of those! We quite logically thought the red and blue zigzags on the flag were W's and M's for War Museum, but my husband, who was a Gunner in his long ago National Service, recognised it later as the Gunner's or Artillery flag!

On Tuesday the Joburg Sketchers were supposed to meet with art counsellors from Lefika and children from Hillbrow to draw and paint together on World Aids Day in the beautifully treed Pieter Roos Park near the city. Only two of us made it there - Leonora and I looked around and listened for kid's voices but no sign of them, so we sat up at the top and started sketching the Hillbrow Tower overlooking the park, feeling out of place among rather a lot of unemployed men sitting about (actually the men with guitar in the middle sketch were from another sketch day in Newtown, but I had such a big empty page around them, I drew the park scene as if it were background, they could just as well have been there... and seeing it's confession time, I didn't fit the top of the tower onto my page so drew it alongside and photoshopped it to the top afterwards, as you can probably tell!)
As we packed up to leave in time to avoid heavy afternoon traffic, we spotted the Lefika group down at the bottom of the hill, just stopping for lunch - a pity our paths crossed too late in the day, I hope we can get together some other time.

Posted by Cathy Gatland at 3:06 PM

The sketches look good to me and I wouldn't have wondered if they were truly plein air on that day or not (guess as long as it looks good, I say good and don't question it :) Sounds like you were brave to get out on a scorcher, anyway! The only time I've ever truly done plein air was in an August scorcher and my paint was drying as soon as I touched it to the paper - lots of hard edges and not what I was used to with watercolor! ha ha Have a wonderful weekend...

hi, cathy, i love your work and a post! i'm typing with both hands from yesterday. I've started to wash a suture line with salt water in a wrist. A caring publisher helen and sweet mentors say "concentrate on recovery for a while." I'm so blessed to be surrounded by such wonderful people like you! i'm getting better. thank u for a caring comment. Kind regards sadami