Our sketchers group went to the historic Braamfontein Cemetery on our last Saturday outing - a place I've driven past hundreds of times, vaguely wondering what was behind the dilapidated fences. Doing some research, I was astounded by the number of significant events and people in Johannesburg that are commemorated here. 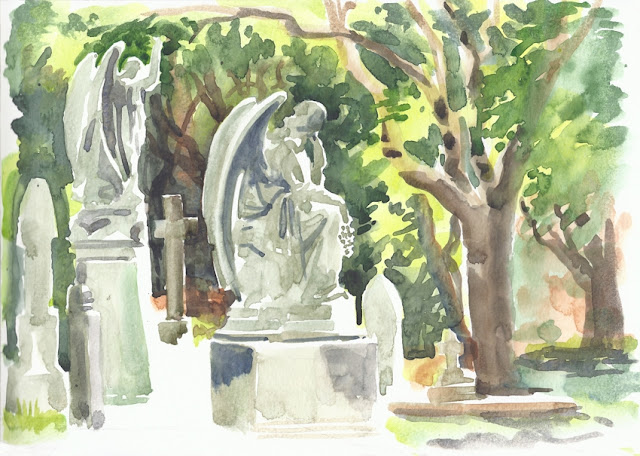 It's divided into sections, including an Anglo-Boer War section, Jewish, Muslim and Chinese sections, firemen & policemen, priests & nuns, and the School of Mines section holding 12000 miners - now represented by a green field and a single huge granite cube which guards the remains of Enoch Sontonga, who wrote our national anthem 'Nkosi Sikelel' iAfrika' - as well as many other graves of early Johannesburgers. Also a Dynamite Memorial for when a train, loaded with dynamite for the mines stood in the hot sun and exploded in 1896, destroying 1500 houses and killing hundreds of people, horses and donkeys. 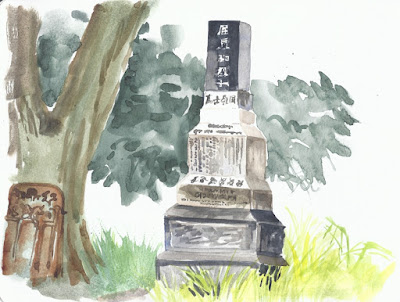 One very moving grave was that of 24 year old Chow Kwai For, who registered under a new law requiring racial registration, unaware that the Chinese community was refusing to do so as a protest against it (he spoke a different dialect and hadn't understood). When he realised what he had done he committed suicide. His letter of apology is engraved on his headstone in Chinese. Sadly looking a bit derelict as are many, but still with a bunch of dried flowers placed before it. 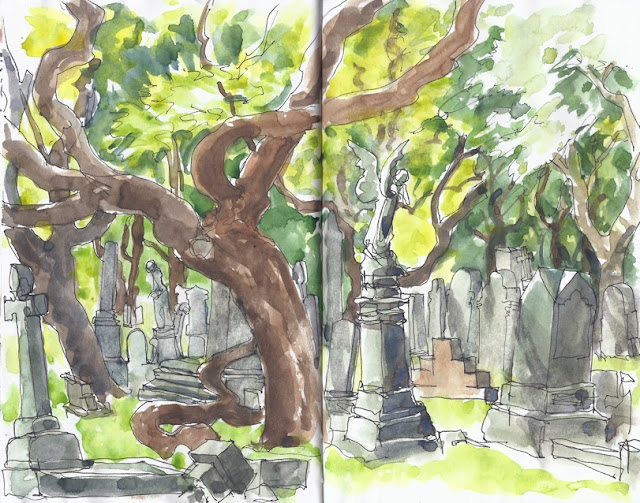 We - and especially me, I seem to be a magnet for them - had been plagued by mosquitoes the whole morning and at this final stop in a remote and neglected part of the cemetery (not sure what section it represented) I found the mother-lode. Trying to draw as fast as possible while squirming and swatting at mozzies made for some interesting linework. Though I quite like the result, I wouldn't recommend it as a sketching technique!
Posted by Cathy Gatland at 2:46 PM

Hi, Cathy, thank u for wonderful paintings and a rich post! I love them all. It tells us your very caring personality, too. Best wishes, Sadami

Beautiful paintings and I enjoyed (well, maybe that's not the right word) the historical aspects of the gravesites. I think cemeteries that hold large angels and monuments are always interesting - something to do this spring, maybe, on a warmer day with no rain. Sorry about the mosquitoes - they love me, too, but I do not reciprocate the feelings!!

Another rich post.Sorry about the mozzies, but the slightly wonky lines *are* interesting!

Thank you Sadami, I think one can't help but be moved by those stories!

Hi Rhonda, I believe that people go to cemeteries for excursions around the world (told me by a German friend who sketched with us). They are interesting, peaceful, moving, out in the fresh air... not a bad way to spend a day out! This one needs a little caretaking though.

Thanks Dinah, think I must try that fast and loose style some more, without mozzies!

Cathy such a rich post...as always. I so enjoyed the historical facts....as always! Did you do a sketch of the last resting place of Enoch Sontonga? I would love to see that. Best wishes and thanks for sharing your wonderful sketches.

You would have loved this sketch date Barbara - this place is crammed with history. I didn't sketch Sontonga's tombstone, might go back, it's quite stark and simple, would be difficult to make into a compelling sketch.