A Thursday Morning in Bertrams 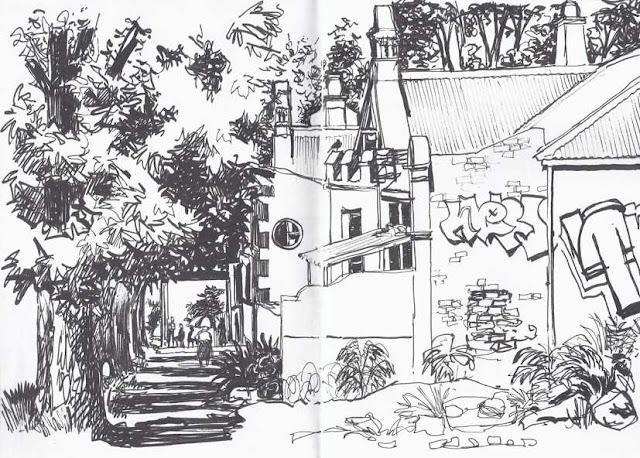 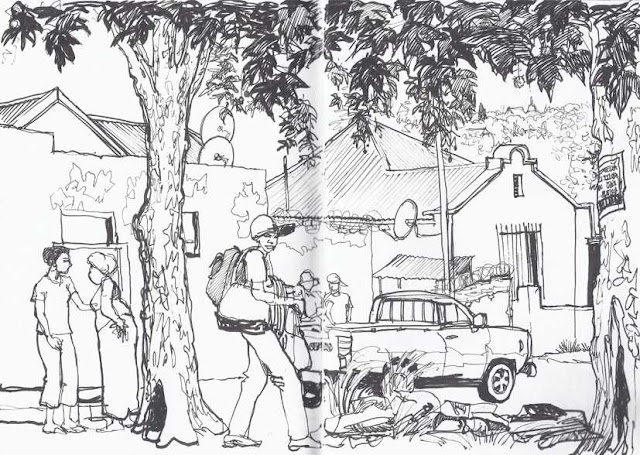 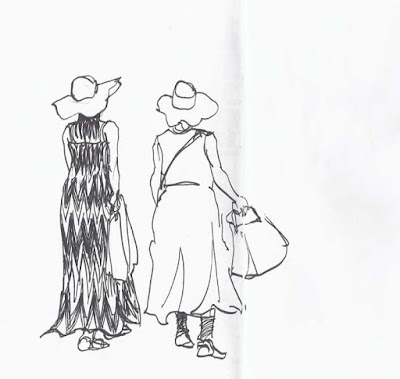 The sketchers group has been getting a lot of invitations lately - as Joburg warms up (and then some!) and events are planned before the rush for the coast in December.

One was to sketch some Street Theatre in the little, poverty stricken suburb of Bertrams just south of the city. We decided to go to a rehearsal on a Thursday morning, but sadly it had been rescheduled without our knowledge - so we found ourselves banging on an unresponsive corrugated iron gate in an famously lawless area. We recklessly decided to unfold our chairs on a corner and start drawing in spite of warnings by concerned individuals to keep our car doors locked etc etc.

As is usually the case when we venture out into Joburg's vastly varied streets, we soon felt part of the furniture as locals passed us by, some stopping to look and chat about drawing, some taking no notice; a father ushering his two sweet little boys to say hello to the gogos (grandmothers); an undoubted illicit exchange between a young chap and a passing mini-bus taxi driver; a woman coming to tell us her story of being kicked out of the nearby home for vulnerable people and being taken in by her kind friend, who came to join the conversation; men changing their car oil and pouring the old stuff into the empty plot next to us (ulp! - sometimes you have to just keep your mouth shut!) Only one very interested look into my sketching bag...luckily he wasn't interested in pens and paint. In the distance a corner café was bustling with activity, the peeling bark of the plane trees leading to it reflecting the surfaces of the decaying but still beautiful buildings.

It felt like street theatre in a way, even without the actors.

[And hooray, my blog list is back!]
Posted by Cathy Gatland at 1:34 PM

Hi, Cathy, lovely black and white! Aw, very happy to know that your blog list has come back to life. Have a productive week! Best wishes, Sadami

I so love your blog Cathy. Your sketches are wonderful and so full of atmosphere and life. I grew up in Joburg, I lived in Emmarentia and spent many a happy hour at Emmarentia Dam (strickly forbidden)as it was known in those days. I come and browse your sketches for my SA fix. Thanks :-)

As always, you give us more than a sketch.Street theatre, indeed. Thank you.

Thank you Sadami, I've been enjoying black and white (tried doing Inktober but not very diligently!)

Hi Bev - we still call it Emmarentia Dam though it's officially Johannesburg Botanical Gardens, and it's just down the road from my house as you probably know by now - thank you for coming here for your fix :) I just had a look at your beautiful paintings, you're in a very different environment now!

Thank you Dinah for your regular visits, I so appreciate them!

Been working with an new Urban Sketchers group getting organized in the north west side of Orlando, FL. The group has been discussing "safety in numbers" with the group. Your foray into not so safe areas has me a little nervous. But you were not alone, of course. Still, we are trying to stay in safer places in larger groups. Love the interaction stories. Some new artists are tender about criticism from by standers.

Always love your sketches. Enjoy the warmth as we enter winter soon.

Oh my word, Cathy, you've been so busy and I've missed so many posts I cant believe it!! I find that first sketch amazing : I love the way you managed, without any colours, to catch the light, the dark shady path under the trees, our eyes can totally reconstruct and imagine the place. It's awesome!