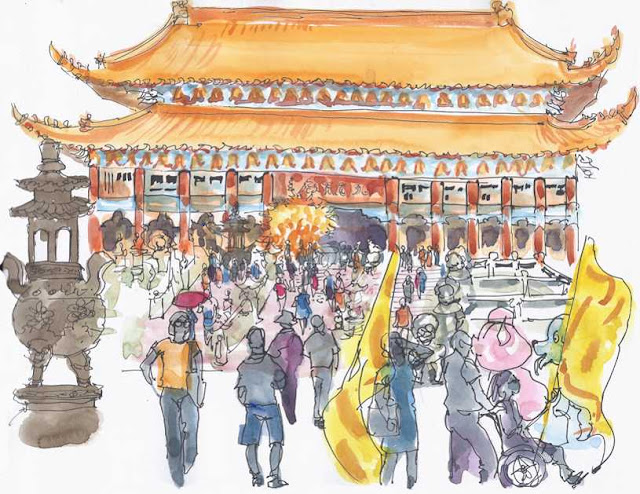 The Worldwide Sketchcrawl where urban sketchers around the world planned to sketch their city's Chinese New Year celebrations was on Saturday 28 January. Johannesburg had at least three CNY celebrations in different venues - one that night in 'Old Chinatown' in Commissioner St in the city; one the following day at the Nan Hua Buddhist Temple near a town called Bronkhorstspruit, about an hour and a half's drive from Joburg - the one we decided to go to as a place we'd always wanted to visit; and another a week later in 'New Chinatown' in Cyrildene, east of the city. So we missed the official Crawl, but our spirit was with everybody (and as someone said, it's still the 28th somewhere!)

Our carload of five sketchers arrived just too late for the opening ceremony with Dancing Dragon, firecrackers, and other spectacles - I thought there'd be more but that was it. We gathered at the entrance - an encouragingly large group of us - just in time to see the dragon being folded away into its trailer. The first pen I grabbed out my bag flew to catch those few moments before it disappeared, and I think it's my favourite sketch of the day! 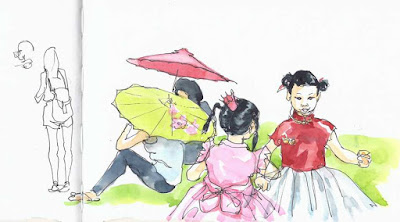 The many temples and shrines around the arena were beautiful subjects, and I had a go, but attempting the intricacies of those was going to take too long, so I tried some sketching shorthand with squiggly lines and loose washes. I wanted to capture some of the people - two sweet little girls in their New Year best, their big brother escaped before I got him on paper. 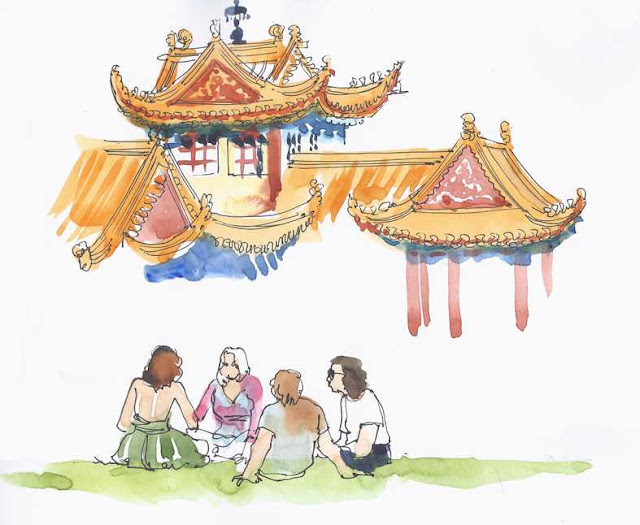 There were loads of food stalls lining the passages around the centre courtyard, and even more people trying to buy it... I didn't try hauling out a sketchbook and pen in the crush, but managed to get hold of a spring roll and settled to sketch one of the picnic groups with greasy fingers. 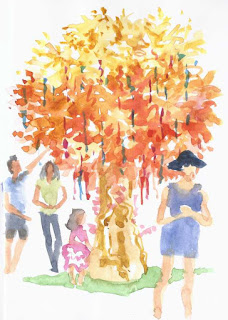 The Wishing Tree, where you have your name inscribed in Chinese calligraphy on a ribbon with a medallion attached, and throw it up into the tree while you make a wish. If the ribbon sticks there, your wish will come true during this Year of the Red Rooster. I didn't risk it! Nan Hua is a huge place and apparently we missed lots more interesting sights and events, but that was about all I could manage in the heat and crowds before the long drive home.

Delightful sketches from a festive occasion! You captured key moments so beautifully.

Such great memories of Chinese New Year in Nan Hua Temple ! You've captured the spirit and the atmosphere