Going to the zoo, how about you?

Our first Spring sketchday was to the zoo again, where I've sketched here, here and here... You'd think I'd get tired of it, but once there I get thoroughly engrossed in trying to capture the animals, even while my heart is aching for their imprisonment. It is really the only place you can get close enough for long enough to study and draw them. I've tried in the wild and believe me, they move and disappear in seconds, even the biggest ones. 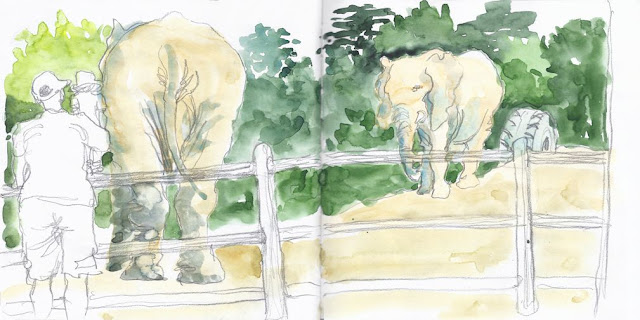 The elephants were wandering around their large enclosure and I captured them as I could - and couldn't resist including a briefly paused onlooker with remarkably similar trousers on! 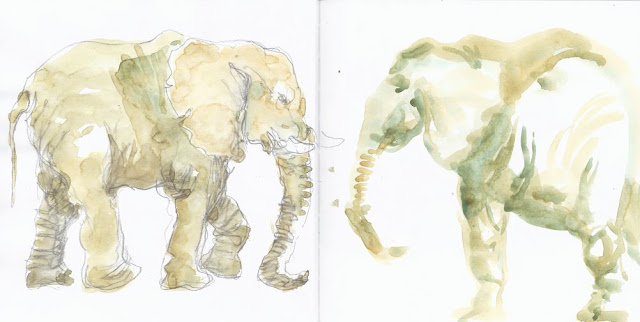 Next door to the ellies was a bored and lonely looking rhino, though he seemed popular with the birds - a peacock, a rooster, plus a dozen little chirpers hung around him as he lolled around in the shade. 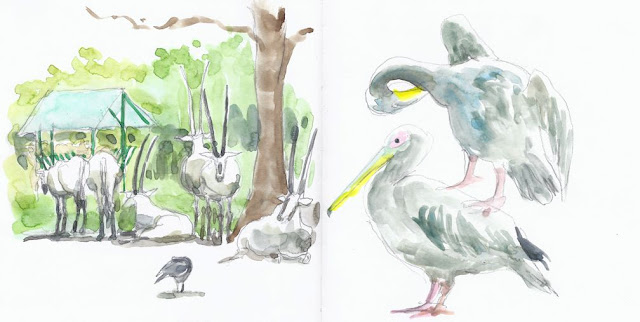 I wasn't sure what the pale, elegant looking antelope were in the distance - later identified by my husband as gemsbok - I haven't seen such light coloured ones before. 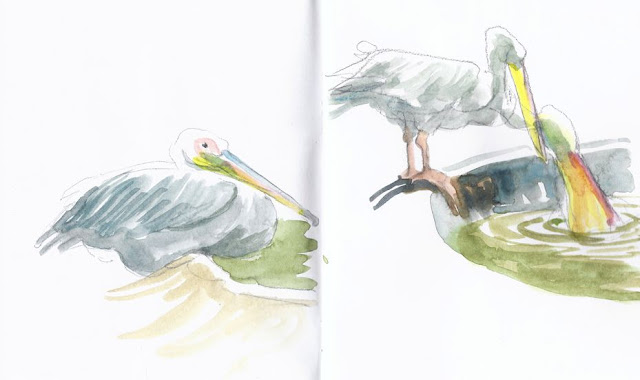 Lastly, after meeting the rest of our group for lunch and sketchbook chat, Leonora and I found some pelicans - one optimistically fishing in a rather filthy khaki pool - and became entranced by trying to reproduce their sculptural feathers, their nursery pastel-coloured faces and their elastic movements, and once again I thought the time at the zoo was too short, I'll have to come back another day, just for the birds.

“A wonderful bird is the Pelican.
His beak can hold more than his belly can.
He can hold in his beak
Enough food for a week!
But I'll be darned if I know how the hellican?”

Lovely sketches. And those "pachydermal pants" could be the next hot fashion!

I never tire of your zoo sketches! Animals are one of my most favorite sketch subjects, too!

Haha Dinah, I think I may have a few pairs already - was really hoping he wouldn't notice me and come over to have a look!

Thank you Tina, I didn't use to love drawing animals (did love THEM though!) but finding it more and more fascinating.

Love the animal sketches - especially the elephants :) No, one never tires of drawing, painting, trying to capture them on paper.