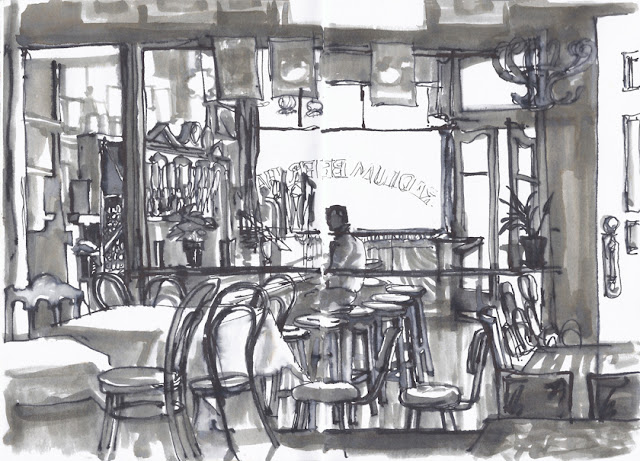 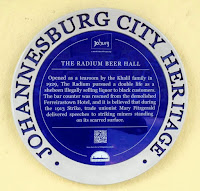 Strange to be sitting in a pub at 10 am on a Monday morning, but that's where I found myself this week, sketching in preparation for another painting in the classes I'm taking (same ones as in the Kalahari bookshop, which is still in progress, and which I should be working on right now.)

This is the Radium Beer Hall, the oldest surviving bar and grill in Johannesburg. It started as a tearoom in 1929 and doubled as a shebeen which, illegally at the time, sold "white man's" liquor to black customers. The very old bar counter was rescued from the demolition of the Ferreirastown Hotel, on which feisty trade union activist "Pick Handle Mary" Fitzgerald apparently stood to spur on striking miners. A fascinating history and great pubby atmosphere - sadly the area around it has become run down and dodgy, but I hope to go back to sketch more of the customers and musicians at one of their regular live music sessions. 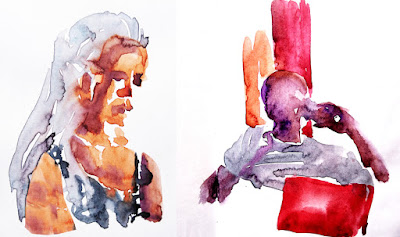 I did a couple of quick watercolour sketches of a couple at the next table - I think the guy is a manager, or works there - he was on the phone a lot and told me he was very, very busy when he came to have a look at my sketch. The girl looked deeply unhappy and the conversation became more and more heated between them, all in French so - probably just as well - I didn't understand a word. As customers started arriving for lunch the argument quietened down. I'm considering putting them in my painting, how times have changed since Pick Handle Mary was around!

Thank you Sadami, I enjoy doing them, always love yours too... MDM (Must do more!)