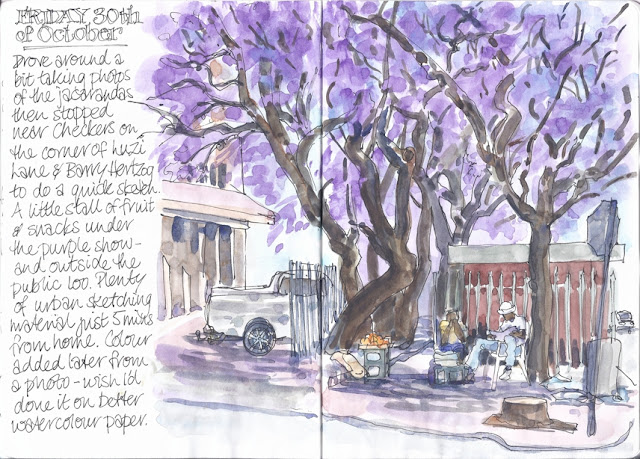 I'm glad I got at least one little sketch of them in, as over the weekend, after a week of scorching heat, we had tumultuous storms of wind, rain and hail that stripped many of the blossoms off their stalks. Hopefully more will bud, I haven't had my fill yet of the purple glory time!

...and the end of Inktober. I didn't much like following the prompts, but sometimes they led to revelations and discoveries - below are some of the drawings I did enjoy:

Thinking of/feeling the word to form the shape of the action, like Throw, top left - I think this was a stick I dipped in coffee and swirled around, then dropped ink into the wet marks and finished off with some descriptive lines. The next one, Coral, almost made itself - the natural movement of ink marks on a wet or damp surface formed coral-like textures - and a fun, quick Chef, after a carefully illustrated one was rejected. 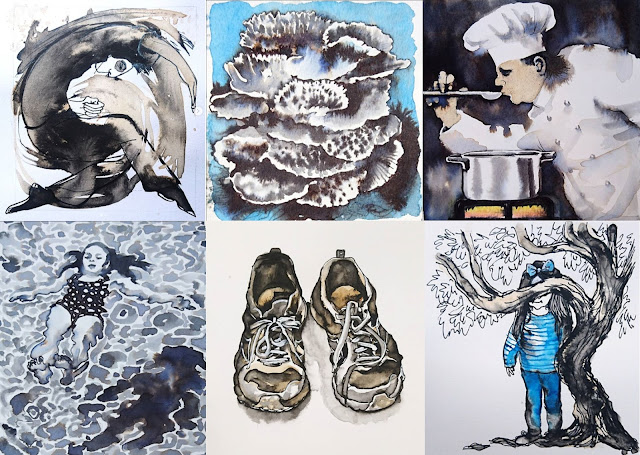 The bottom three were more personal - Float - from a photo of my daughter, though it doesn't look like her - water and its distortions are always interesting, as are Shoes, especially well-used battered old takkies - and Hide - my little 3 year old granddaughter's idea of how to do it...(smiley face with hearts emoticon here)
I'm trying to figure out what it is I really love to do, as time runs away at an ever faster rate and I don't want to waste any doing stuff I don't love any more, so Inktober was good for that at least. Some days were diamonds, and some days were stones!
Posted by Cathy Gatland at 2:57 PM

We have a few jacaranda trees here in central Florida...they come in spring...April mostly. Just like a fairy tale as there is nothing quite like them. I've seen you paint these before and am jealous you have many.
Love seeing my blog in your favorites. Thanks for sharing the journey.

I am envious of your jacarandas and always know you’ll be out painting them for us :). Love the daily drawings with the prompts (a smile from the hide and seek one of your grand :).