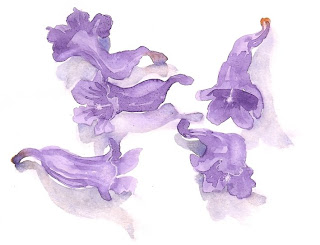 One last project with the jacarandas before I really move on to something else! I've had a bag full of pods sitting in my studio for a couple of years, and an idea of making Christmas angels from them for a lot more years, so I thought this would be a good time to put thought into action, and have these little jac-angels to go with the series of paintings at the A&C Fair. 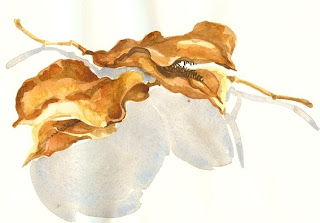 The flowers are about all that's left of the fantastic spring display, a few scattered around the lawn and streets.
The pods are in wonderfully convoluted shapes that just make me think of wings and celestial garments - these I've sketched here are not as shapely as some, so weren't chosen to be angels (like not being picked for the Nativity play - aww!). 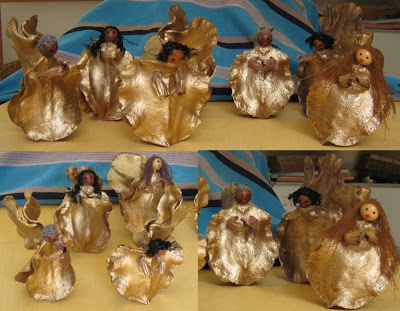 There were only enough good pods to make 9 angels - many more than that I'll have to get a production team - they are pretty fiddly! I had such trouble trying to photograph them with my new camera - I've now got it stuck on a setting that turns them all greenish grey, though the images are sharp, unlike these that are a bit out of focus. I'll have to go find the book and read it - darn!
Posted by Cathy Gatland at 3:04 PM

They'd look lovely hanging on a mobile... I think you should keep them!

I shall miss your lovely Jacaranda paintings. Love the pod angels... they'd look great on my Christmas tree in a couple of weeks! ;-)

What are these pods called?

They are jacaranda pods from the jacaranda tree in my garden - it's native I believe, to South America but there are hundreds of thousands of them here in Johannesburg and Pretoria.

P.S. If you click on the Tag 'JACARANDA' at the bottom of the post you can see more paintings and photos of them.