Orchid show and a sale!

This past weekend was the Orchid Show at the botanical gardens which are conveniently close by to where we live. Yesterday I took my small watercolour moleskine and tiny tin of paints and tried to sketch surreptitiously around the displays. I couldn't get over the huge variety of species of orchid, including some tiny delicate indigenous beauties and one huge magenta coloured one that smelled like a heavenly confection of vanilla, cinnamon and other spices. I wish I'd gone to look on one day and sketch on another, as I didn't get around the whole show after dawdling over my doodles - but glad I braved the curiosity of passers by, who were only pleasant and respectful of my attempts!

And... some long-timers who've read my blog for a couple of years may (or may not!) remember these posts from August 2008 where I painted three very big watercolours on request for possible sale to a client of an art promoter friend, for his offices. After much paint, paper, and long urgent hours of slog... he rejected them and they disappeared off my radar screen until a couple of weeks ago when Jane asked if she could put them on an exhibition at the new iStore, how cool is that! And they all sold! After I'd totally given up on them. in fact I was planning to use them for collages or recycling of some sort when I got them back. 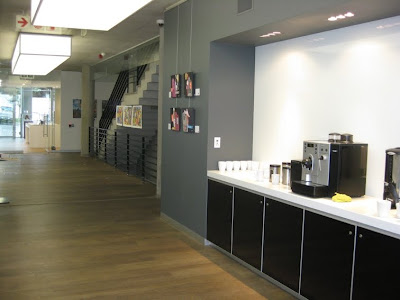 There they are hanging against the stairwell - they weren't even framed, which would have been a very expensive undertaking, but Jane's clever placing of them suspended in space was very effective. Below that some sculptures by 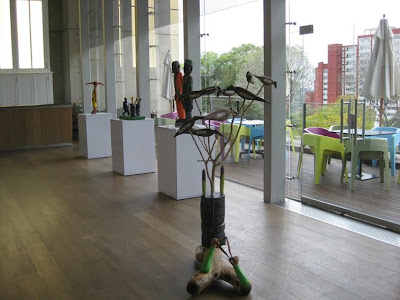 Johannes and Collen Maswaganyi with part of the Sandton skyline behind them.

Posted by Cathy Gatland at 5:01 PM

How exciting for you to have sold these wonderful paintings. I am so glad you didn't recycle them into a collage. They are hanging in a great place. Very cool!!!

As always Cathy, your sketches bring the city to life. Wonderful and well done on the sale!!

GREAT sketches Cathy and congratulations on the sale! Jane did a great job of displaying them!

Well, you know how much I would love your sketches at the Botanical event - very brave with all that buzzling crowd. As for the three big watercolours, you so deverse to have sold them. They must have looked stunning against the cool backdrop of such a modern looking building. Wonderfully expressive work.

These are beautiful watercolours from the show and I love the old paintings. I am not surprised they sold. Congratulations!!!

I LOVE these delightful paintings! The colours are so vibrant! I'm not at all surprised you sold them, only that they were ever rejected!

Pat, me too! I think Jane suspected they may meet such a fate - she kept them well away from me!

Merci beaucoup Martine - now that really is the extent of my French, but I appreciate your kind comments (my husband speaks much more than I do, so can interpret for me - though I could get the gist of this one!)

Thanks so much Liz - it is a very lively city, if you keep your eyes open and get out in it!

Maree, thanks - she really did, I didn't know how we would get away without frames!

Joan, thank you - it was quite a safe place to sketch really, lots of nice gentle garden-loving folk who were very polite in giving me my space!

Thanks Traveling Sue - I must catch up to wherever you are now
...and Sandra, I actually wasn't too surprised as I felt I'd bashed them out so fast, but they looked better than I remembered them and luckily somebody else loved them, eventually!

Lovely, colourful spreads Cathy! And the three gorgeous paintings - I can't believe they were rejected!

Oh, Cathy, how wonderful that those gorgeous paintings sold! Lucky buyer! And, of course, I wish I could plunge right INTO your sketchbook---such delicious little jewels of color and light. And thank you so much for your wonderfully supportive comments. You're a loyal friend.
Xoxo,
Laura

ooh - I haven't been here for a while and look what I missed. Thanks for the reminder of the African paintings. I was wondering which ones they were. So great that they sold. The orchid show sketches are so colourful and delightful. And the previous post "My Hill" - great perspective and balance between light and dark. I look forward to walking up and down it with you.

I love your sketchbook spreads! These are wonderful! I really enjoy your work.

Thank you Anne Marie, Felicity and Laura for your lovely comments.

Gillian, I look forward to that too! Why don't you stop over after the wedding? ;)

Sue, thank you so much... I feel honoured that you do!

Brava, Jane! For knowing a good thing when you see it--and congratulations to you, Cathy, on the sale. I do remember those paintings--they're so full of life, who could forget!