Over the last few months, on and off, I've been spending time in the studio determined to finish a whole bunch of half-done paintings - for better or for worse! 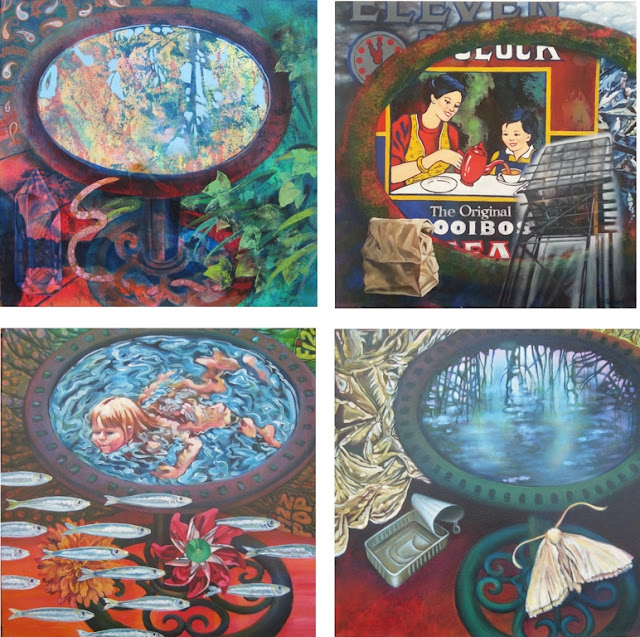 These you may (or well may not) recognise from a previous post on Greg Kerr's Objets Trouvé workshop in 2014. Below are some of the stages these 60 x 60 cm paintings have gone through, some rather tortuously, via a series of processes. Splashing, rolling and printing paint onto the canvases with an underlying prepared motif  - mine our birdbath - which had to consist of organic and geometric forms. Interventions followed of adding textures, patterns and elements - some prescribed by Greg (each painting had an element taken from someone else in the class's paintings, to explain some strange additions... the crystal, the water tower, the child swimming, the sardine tin) as we worked through the course, some added tentatively or recklessly by me as I eventually took the plunge and tried to leave dependency on the teacher behind me.

Often I wished I could backtrack to a previous stage of simplicity or clarity, and in the one with the child swimming (I changed my classmate's child into my daughter) I was at the point of scrapping the whole thing but decided that more might be more and carried on adding flowers and fishes and glazes... it may still be scrapped...or cropped down to just the little girl swimming...or I could add the kitchen sink...

With changes and a move from Joburg sometime in the not too distant future, I have to finish and clear out so much stuff I don't know where to start. Painting is the relatively easy bit, I have to get them out of here!
Posted by Cathy Gatland at 1:59 PM