I was planning to go out and sketch - perhaps try my hand at some buildings - eek! - when my attention was diverted (this happens a lot) by the Opening of Parliament ceremony on TV, and especially by the Fabulous Hats milling around in the Cape Town sunshine - 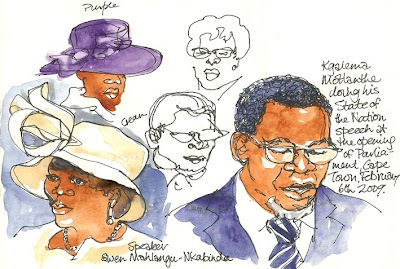 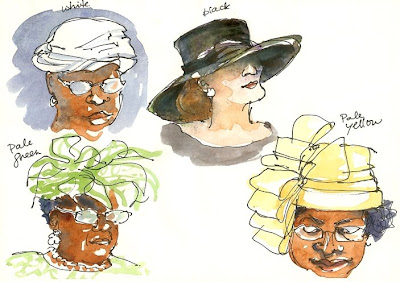 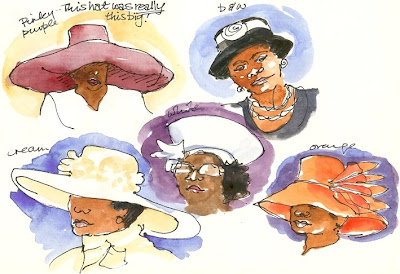 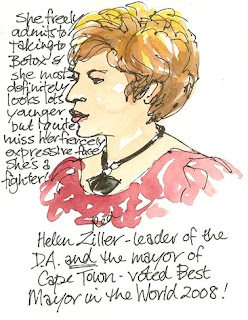 I would have liked to be there. I sketched these while the President was talking and the cameras were roaming around - sometimes putting the TV on 'pause' to capture a particularly fetching creation. I would like to wear one of these hats - but where? And would I have the gumption? I know at least one of my sisters does... ;-)

Helen Zille, leader of one of the opposition parties - referred to in some circles as 'Godzilla' because of her tenacious and fearsome qualities - didn't wear a hat. This was her being interviewed after proceedings. It would have been difficult to be as forthright from underneath a big
confection.
Posted by Cathy Gatland at 7:53 PM

Great post! I love seeing all the hats--they are gorgeous; I don't know which is my favorite ... I have a straw hat that like the pinky purple one that I bought in New Orleans years ago: it's so big it shades my shoulders!

I stopped by after seeing you were following one of my blogs. I enjoy your work.

Oh, I love this! I also would LIKE to wear hats, but never do...They sure look great on these women.

I love it... I'm a hat person and those are some real beauties!

All women should be bold enough to wear hats - especially ones as lovely as these! I've been following a while and so enjoy your work.

These are great, C! The Smithsonian wants Aretha Franklin to donate her amazing hat she wore at Obama's inauguration ceremony. She's apparently having a hard time giving it up - its too special!

Thank you everybody for stopping by and leaving your comments - I appreciate it so much. I'm glad to know some of you are Hatters - Laura and Helen..!
Gillian, Aretha's hat was wonderful - I think she should keep it and leave it to the Smithsonian in her will.

You did these from the television??? They are completely wonderful and it's not fair that you get so much life and charm from this method! (I never could.)

Hai Cathy, I missed the opening and the wonderful array of dresses and hats. Thanks for bringing it to life here on your blog. Fantastic creations and you have got Kgalema down perfectly. Fantastic portrait! Gosh, but you're good.

A wonderful assortment of hats.. all sizes, shapes and colors. Love the composition... one person turned this way, another person looking that way, etc. Very lively!

Hooray for all the hats, so beautifully captured.You are so clever, and your joy in the work shines through! Hats are so flattering to women (and sometimes to men),it is a pity we don't all wear them more often.