Off to see the world 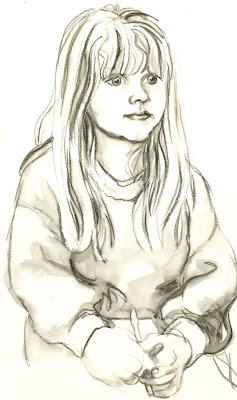 Another daughter has ventured forth and flown off to London to find her feet - if not her fortune. In January last year I did a post about her sister going off to Dubai, and dug out some old sketches I'd done of her. This child, being the one who never sat still, and then later who was always 'out', has far fewer of my efforts expended on her, I had to really scratch to find these. I suspect we may hear more of her news now that she's far away than I did when she was home, in between work, netball, yoga, party, party, party, scuba-diving, rock climbing and just hanging out with her friends. Well I hope so anyway!
Though none of these sketches look terribly like her, they all remind me of the various stages of her childhood. Endlessly interested six-year old, happy 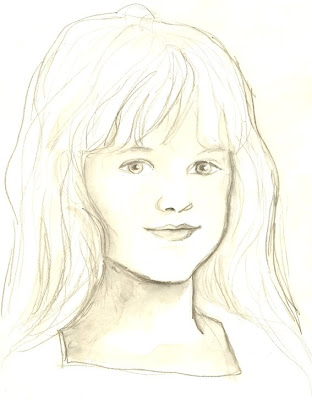 confident niner, slightly sulky sixteen-wishing-she were-somewhere-else, and sunny excited just finished school and off on her first unsupervised holiday with the ever-important friends.
She arrived at Heathrow at 5.30 this morning, and we've had a message from her to say she found her way to her destination on the tube all by herself!
God Bless, golden girl - I hope London and wherever else you roam to, will be as wonderful as your wildest dreams. 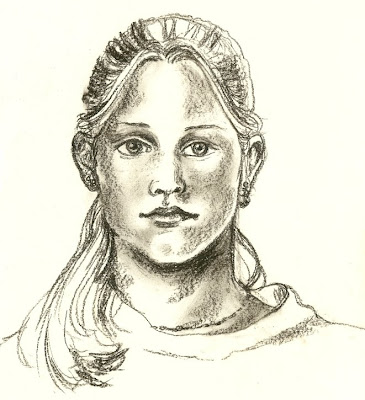 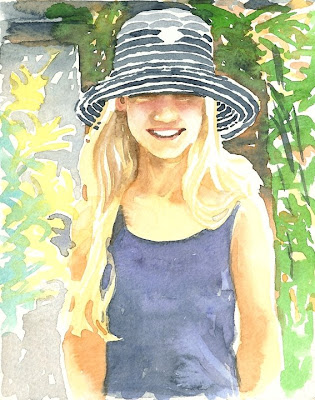 Posted by Cathy Gatland at 3:02 PM

Oy, lump in the throat! I can relate. Lovely sketches, even if illusive. Your work just keeps getting better and better, Cathy.

Carol, I can't imagine how hard it must be to send them off to the army... this is bad enough. best wishes

Just hold on, Cathy and she will be fine!...Beautiful sketches ,by the way..my favourite is the water color.You have excelled here!

Oooh. It's tought o have a vacancy at home. And in your heart. She's really lovely and I too love the watercolor.

I understand and empathize so deeply, Cathy. I have two daughters, too, the youngest maybe a couple of years older than yours. In painting and drawing them, I can keep them close by. These are wonderfully made and very touching.

It was so hard to send my son off just across the state... I can imagine.... great sketches

She is truly a golden girl,beautiful but also very grounded, happy natured and very bright. She'll make friends and impress wherever she goes. Wishing her everything wonderful on her travels. Hey! I think I recognise that hat.

Thanks Arti, Sandy and Helen - she will be fine!

Laura - she has been away to university for 4 years, and worked, so is probably around the same sort of age. The time spent drawing does seem to keep them closer.

Thanks V, I think she'll have a great time - the hat was one I bought for her that she loved, but blew off in a Cape South-easter on that holiday, never to be seen again!

With a daughter and her three girls who seem to be growing very quickly, I so so sympathise. Oh dear Cathy - it must seem a long way away.... but to me from London is simply a train ride to Norwich. I'm saying this because if she is in real need you must let me know.
Wonderful sketches of such a charming young lady.

These beautiful sketches are so full of nostalgia of what seems like simpler times. I was lucky enough to see her at all those various stages.
Internet cafes will help bridge the miles that separate... Or did she take her own laptop?

Joan, you are so sweet, thank you! She is very capable, in spite of her mother's wibblies, and has some good backups, but I will remember that, just in case! (I think I'll cry now- gosh)

Gin - she has a laptop, and facebook, and a cellphone - joh! remember the simpler times when V&H went 'overseas' with nothing but Basildon Bond and a few stamps. We are very lucky! Remember that, Vivienne? You were so brave!

Ah, but we went by ship!Our money ran out so quickly,we really used up the contacts! God bless Ian and Jean, especially. Who else can remember "Europe on $10 a day"? ...then there was the $5 version, and my friend and I mostly did it on £1.00! I have willingly put up waifs and strays ever since, repayment of my debt to Society!

beautiful drawings and post Cathy, i can't even start to imagine when my 3 year old daughter takes off on her own, but i know the day will come faster than i think

You and yours have certainly been a haven for the wandering and bewildered, V - bless you!

Gabi, it sure does - treasure the time until then!

The ones I love (you know who they are!)are just a pleasure... no debt involved, and we just hope they want to see ancient us on occasion!

Lovely drawings and painting of a lovely young lady. Sure wish I'd taken time for art when my boys were younger and at home... would love to have hand drawn mementos of their youth like these. You're a smart Mom!

Came across your blog via Urban Sketchers and have just spent a happy hour or so looking at all you past posts and paintings. WOW! You are so talented and a real inspiration. Thank you for being so generous with your work and posting them for wannabe artists (like me!) to admire.
Alex

Lovely portraits Cathy! Always so hard to let them go and themn comes the wonderful times when they fly back to visit the nest; the fun takes on such different dimensions. It WILL be a wonderful experience for her.
ronell

Oh, Cathy, I know what you mean. My own little girl is all grown up, has been to flight school in the navy, and now is a doctor. But she has travelled to Spain, Argentina, and Egypt by herself. I could hardly breathe the first time she went far. Your daughter looks very capable in her straw hat. You can just feel the confidence in the painting. She'll be ok.

Lovely sketches, Cathy: It must have been bittersweet for you to put this post together. I'm awed by young people who are so brave to travel so far from home: you've raised a confident woman! I hope she sees this post.

While it is odd adjusting to life without adolescents buzzing around, its also very good for them to explore the world. In fact, I think it should be almost compulsory so not to get too insular.

My own daughters are in the prairies, far away from the ocean and the east. But they enjoy it and in turn their enjoyment comes to me.

I travelled around that age as well - to London too and by myself. I had adventures, I made friends. The advantage these days is the ease at which we can communicate quickly. In my time, it was expensive long distance calls - usually collect! :)

note how portrait two & last portrait have the same slightly indented upper chin line profile on left side (jowl). Scanning for the traits that remain the same over the years.

Cute. She love it all.