On Sunday was the annual Walk the Talk fundraising event where 50 000 people pound the pavements of Joburg, starting and ending about 500 metres from our house. Those who've been watching this blog since it's beginning (I know there are at least two of you ;-) will know that means that the second anniversary of A Sketch in Time is therefore coming around soon! 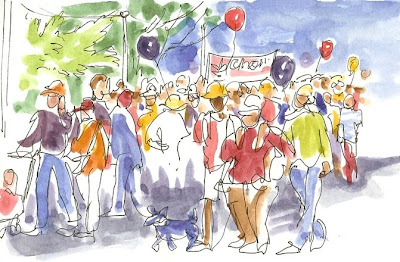 I'm embarrassed to read on last year's post I did about the walk (this is the first one), I vowed that BFG and me would be partaking next year...ahem, coff, coff, we weren't quite feeling up to, er, registering in time, and when we were feeling fitter, well, um, it was just too late...darn! I'm ashamed that a declared Sketcherciser chickened out - again, but we went down to watch and encourage, with camera and sketchbook, and it was lots of fun. My sketch of the walkers isn't nearly as 'accomplished' as last year's - that's because I tried to do it live, on the spot, with no techno-aids... just impossible really, they all came at me so thick and fast. 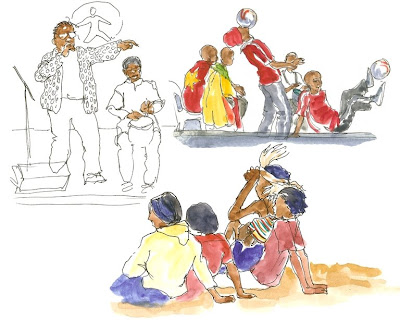 So I gave up and we went to Mark's Park where the end-celebrations were taking place. I sat in front of the stage and started sketching a group, trying to get a view of the interesting looking befeathered and beskinned people sitting in it, and on the stage - Bongani who sang, and some wizard soccer-ball jugglers with drummers. 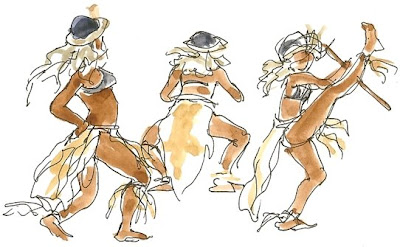 Then the people in skins jumped onto the stage and began some very high-energy, high-kicking, stomping and springing - they were a Zulu dance group, I don't know from where - perhaps Gold Reef City or some such tourist destination - we don't generally have Zulu warriors and maidens in full regalia strutting around the streets - I thought they'd dressed up for the walk, as many do.


After their spirited show a group of Tswana 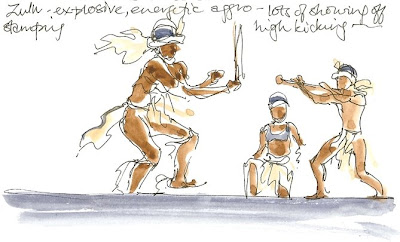 dancers went up - dressed in different skins, they did a much more restrained performance - it looked like a courting sort of dance with much flirting, pleading and spurning going on.

I sketched these in a very small A6 sketchbook - trying as always, to be inconspicuous, but a few people around noticed and came to have a look over my shoulder, 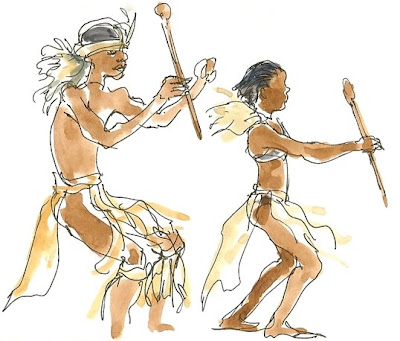 making me feel embarrassed at the little squiggles I'd produced. They were improved after I'd added a bit of colour at home.


While I was busy trying to make a scribbled record of the day, my husband was having a whale of a time routing out some famous sportsmen who were donating their time and energy to the occasion and it's charities, and cajoling them to pose with him for his version of a brag book. Here he is with, from left to right, Michael Vaughan, the ex-England cricket Captain, 'Baby Jake' Matlala, our flyweight boxing champ, and Bafana Bafana soccer star/ex-Leeds United captain, Lucas Radebe. He already has pictures with many of the Springbok rugby team who he was overjoyed to find himself with, on a flight from Cape Town some time 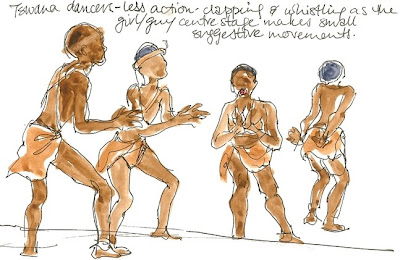 ago, and with whom he now identifies so strongly that the green-and-gold Springbok jersey is donned at every opportunity.

Don't be hard on yourself, Cathy, for not participating in the walk - you got some good sketches of the whole day and sounds like your husband had a grand time, too :) Thanks for sharing - and Happy Blogger-versary early :) I'm sure you'll post the exact day later and I'll get to tell you again!

Thanks Rhonda! I just need to keep my good intentions to myself until I'm sure they're going to come to fruition!

Oh Kathy...I was thrilled with your sketches. The first one has a wonderful rhythmic quality of movement to it. I am SO impressed. And the dancers...very very exotic to me in the US in the north woods. Although we do have beautiful native American dancers here in our part of the state (Ojibwa) and I am inspired now to maybe do some sketches of them! thanks so much for that inspiration! And I do think you have more than two people following your blog!!! Hahahaha. Coff Coff.

Well that certainly wasn't wasted! Never mind walking, all that sketching - it's fabulous!

Your 'scribbled record of the day'-- especially the annotated dancers -- is a real treat!

Great post recording what seems to have been a great day of celebration. There's amazing freedom and movement in the first sketch you criticised but I loved. The movement of all the dancers has been captured so well I felt their exuberant spirit dancing all over your sketch pages. You're so good at this sketchercise - far more unique than simply doing the 'walk'.

Hi Ginny - the native American dancers would be a wonderful subject - do have a go! My two followers from the very start are my good and faithful sisters in Texas and Australia - I feel gratified to have gathered more along the way!

Thank you Charlene and Liz :) the bod could use the walk though!

It was a happy day Joan - its been rather a 'winter of discontent' here, but everyone forgot their woes and had a great time. Thanks for your kind words

Cathy, your sketches are positively rocking with vibration! I can virtually see the pulsating hip movements! Wonderful, and VERY accomplished.

I'll start with the LAST of the post. Loved seeing my favourite bro-in-law posing with his favourite sports heroes! :D Re. the drawings - I love that very loose fast one - really love it!! Its full of movement and suggestion that allows the brain to just do the rest. How lucky you were to see all the feathered dancers. I think the last time I saw Zulu dancers was at the Grahamstown festival -they attracted such a large crowd, we couldn't really see much from where we were. Their energy is so infectious - if only I could tap into some now...

Thanks Maree - some of the vibration might have been nerves <:-}

Hi GPH (how was the Pilates?) The blog anniversary is actually on Friday, but no thoughts so far on what to do about it - but thanks! That very fast loose one was so stressful, I was almost hyper-ventilating, and could see NO merit in it till - well, till my nice friends here told me they liked it - don't know if that will become a modus operandus in future. Your b-i-l had a good day!
I vaguely remember having energy like those dancers, once upon a time!

Hi Cathy, I really like your work and hope that this interests you and your readers.

I am attempting to amass a large collection of portraits of Frankenstein's Monster in as many different styles and in as many different media as possible as an ongoing art project. The only stipulation is that the size is 2.5 inches by 3.5 inches (standard artist trading card size) and that each card has name, date, location, title and anything else you care to add on the back.

I welcome cards from both amateur and professional artists.

I will be leaving blank cards with instructions and mailing address in galleries, colleges, art shops, on buses, handing them out in the street and wherever else I can think of.

If you think you can spare the time to produce a little something, please send a portrait to:

Each card I receive will be uploaded at http://apatchworkofflesh.blogspot.com/ to produce an on-line gallery, I then hope to put on an exhibition of these cards in a gallery.

If you could add me as a link or give the project a mention I would be really grateful.

Hi Cathy, as I was awarded the Kreativ Blogger Award by Crista from Nature As Is (http://nature-as-is.blogspot.com) I, in turn, have to state 7 things about myself and nominate 7 blogs of my choice, I have chosen to nominate you as one of my inspirational fellow-bloggers. Go to
http://artandcreativity-maree.blogspot.com/2009/07/blogger-award.html view the post.

Hi Cathy--These are fabulous, so full of life and energy; and you are masterful at putting together little groupings. These really are superb.

Maree, thanks so much! That is so kind of you and the inspiration is mutual... I'll get around to the 7 things soon too (got a bit busy here again with other stuff)

Laura, thanks - I have to admit to sometimes putting groupings together in Photoshop - the one with spectators and soccer jugglers for eg... I'm not that great at planning pages!

I just love your sketches of the Zulu dance group. You could frame those, and they're ready for showing off. Congratuations on your blog anniversary, too

Too bad I missed this event! From your great sketches it looked like lots of fun!!

Hope you don't mind me doffing my hat to you.