How to Sketch Crowds

This post is in response to a couple of comments, asking that I reveal all on How to Sketch Crowds. It's been a novel and slightly daunting experience trying to formulate what has come about through years of trial and error, and the good old 3 P's - practice, practice, practice - in my case both voluntary and imposed (when I was required to draw anything, fast, on demand as a junior 'renderer' in the ad industry way back when...)
Katherine Tyrrell has also done comprehensive posts on drawing people and people while eating - forgive me if I repeat some of what she's said - it probably means that's a pretty good point to remember!

First I'll presume that you're very familiar with drawing single figures and faces before you get to the crowds... lots of life-drawing, your family or friends in front of the TV, etc. Figures and faces from the side, front, top, three-quarter, back, sitting, slouching, smiling, frowning... Observation is a lifelong exercise that never ends - I'll stare at someone's foot, taking mental notes of how it looks from the front, or how a mouth curves when facing up and laughing... it's why I sometimes don't hear what you're saying to me, but also why I think I've got better at drawing over the years! 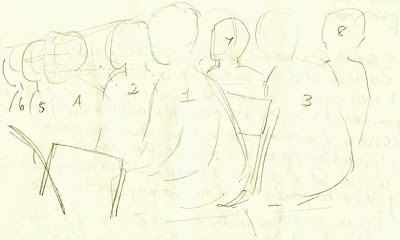 OK. Crowds. I start with one figure - generally around the centre foreground. I might start with sketchy pencil lines like this --> to vaguely place the figures, especially if there's perspective involved, but not always. I've numbered them more or less as I'd start and finish. If there are structure/s around which people are arranged, like chairs, tables, pillars, indicate them to give you a point of reference for size and position. Not too much detail on those - you can add that later if you want to.

With these at the licensing department I sketched in pencil and added pen and watercolour afterwards at home, but keeping, as much as I could, the spontaneous feel - I wished soon after I started, that I had gone straight in with pen, but it was one of my first attempts at a crowded room, so I was a bit wary. And I didn't know I would have so much time to draw!

I don't worry about getting the right people in the right places - who would know? - in this situation, every ten to fifteen minutes the queue of people got up and shifted 5 or 6 seats along, so the next person I drew would be relative to the first, but wasn't necessarily the person that was sitting next to them at the time. 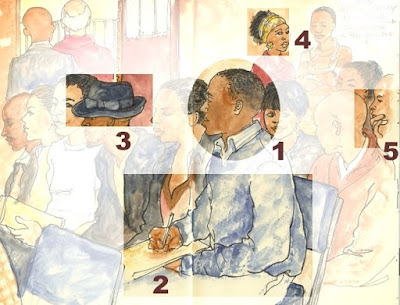 I drew the head and shoulders of this guy (1), and the line got up and moved, so I left his lower half until a suitable body came along to complete the figure. The owner of the hands filling in his forms (2) actually had his head (with long, floppy hair if I remember correctly) bent right over them, but added onto my original head, they're just paused in their writing task.
A note on hands - don't stress over them, if they're the right size and vague shape, they'll register as 'hands' - don't get into counting fingers as I used to do!
I'll continue with figures to the left and right of my first one, front to back - I like to do two or three character sketches, just because I enjoy people's faces, especially if there are interesting expressions, hats (3), hairdo's (4) and so on. Then I fill in the gaps between the main players...whatever can provide some interest to a sea of heads and shoulders, I look out for and put in. A hand gesture to the face (5) a yawn, a stretch - anything to add mood or liveliness to a scene. 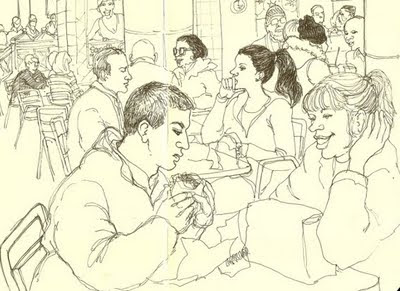 In this Food Court sketch I think I started with the girl with the ponytail, as she was a 'safe' distance away not to notice. The woman on the right arrived and smiled and laughed continuously the whole time she was there, but by the time I got to her daughter, I think it was that she was talking to, they were moving off, so she's smiling and chatting to a total
stranger who sat down there next, and gulped his food so fast I only just got him down in time! 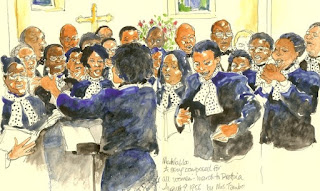 In this sketch of a moving, singing, dancing choir, I started with the central figure of the choir-leader - I went straight in with my fine pen (0.2 unipin) - don't worry if lines overlap or if you do some 'wrong' lines - it all adds to the impression of movement and action, and might help in developing your own special signature style. I picked out just one figure that I had a good view of and sketched them doing whatever it was at the time - the one to the right of the conductor dancing, the next clapping, then to the gaps in between, going back row by row and filling in - again, nobody will know or care if you left somebody out or put someone in a different place, as long as they are more or less in proportion to each other.

As for colour - I mostly add it later at home, unless I have unlimited time and space, don't mind who's watching and have all my equipment to hand, which isn't often - in fact it's usually from the shelter of my car that I occasionally paint people on the spot. Sometimes I'll pencil in colour notes to remind me, as in the second pencil sketch - sometimes one or two striking colours serve to highlight a figure or group. With the choir, they were all in black but I used blue to enliven the darks, and their spotted scarves to further convey their energy and sparkle.

I hope you find this helpful, Linda, and any other interested parties - it was Cathy of Cards and Stuff who commented "I'm amazed at how many people you can sketch !! And the sketches seem to have been done calmly... Are people sitting nicely still for you to sketch them or what? ;-) What's your magic trick?" No, I'm definitely not always calm Cathy, and they don't sit still, but hopefully this explains some of my process, which undergoes reviews constantly, so check back!
Posted by Cathy Gatland at 10:32 AM

Email ThisBlogThis!Share to TwitterShare to FacebookShare to Pinterest
Labels: how to, moleskine, people, sketchbook, sketching

Wow.... some great info in there. I like the way you "mix and match" heads, bodies, hands, etc.... sort of like custom designed people!

Thanks! As always, your art is so fresh and inspiring. Always a pleasure to visit.

Great post, Cathy. I love the concept of a jigsaw of different people and the laughing woman having lunch with the stranger. Beautiful results you achieve too.

What a fantastic post Cathy. Thank you for that.

These are terrific pointers, Cathy -- especially the first things to do to actually get started. Establishing positions of a few people and reference items will go a long way toward heading off a blank paper panic attack.

Had a good laugh at the background info on the Food Court sketch too.

Thanks everybody... I by no means consider myself an expert on this topic, but I'm happy to share what I can!

What a great lesson, and all for free.It's that knowledge and practice of the individual that enables you to put them together so well. Being relaxed and having a go without stressing and rubbing out and being too self critical is important, isn't it? What seems awful at the time often looks better later, and even if not great, it seals a memory and trains the powers of observation for next time. Lots of love

Thnaks a million for this post!!!!!! At last I have some answers and it's funny to see how you work mixing people's faces and hands and all!! I remember that sketch of the woman in the food court well, and I also remember that I wondered at the time why she was laughing so much at the serious guy gulping his food down! Now I know! What a laugh indeed!! ;-) Thanks to your explanations, I think I'm going to try my first crowd as soon as possible!!

Oh good, Cathy - I hope you enjoy trying and can just relax and let what happens, happen - it's all a rather unpredictable journey!

a great post Cathy and great tips..a question; how long does it take you to draw one drawing like this, sayfor exapmple, the one on the right just above the choir?
Ronell

Ronell, I'm so bad at time-keeping, but I think that one took about 40 - 50 minutes, I know we spent 3 hours at the licensing dept, and during that time I did 4 pencil sketches, with a little bit of wandering around in between. An average of 45 mins per sketch I guess! I also spend time pretending I'm not looking at people when they spot me staring at them... tum-te-tum tum tum

Thank you so for having this on your blog. You have no idea from a person thats learning from her own what this means to me, My printer is not working at this time or Id have this with me always. I can imagine how much thought went into this peace and all I can say is your art must mean alot to you inside for taking the time to explain this. Again much thanks to you and wish there was a way to take a class from you it truly would benift my art learning path.
Alaways,
Linda