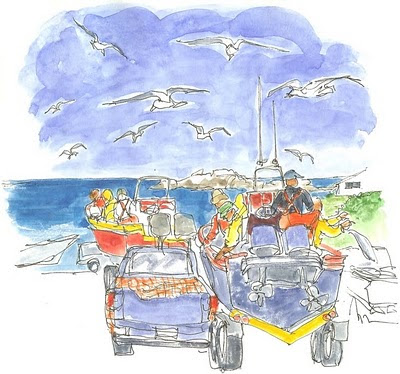 My other two sketches from our drive around the Cape peninsula last week - we stopped at Miller's Point to watch the snoek boats coming in with their bountiful catches - good to know there still are sometimes bountiful catches to be had for these fishermen. Apparently snoek is nomadic and grows fast, so is resilient to trawlers and other dangers of the deep. 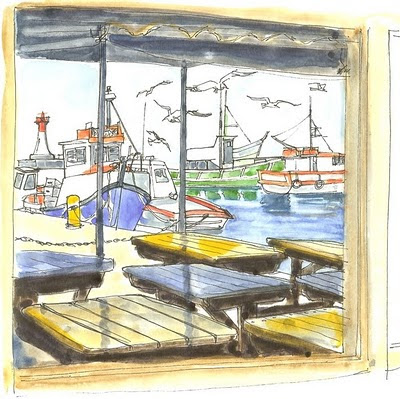 When there's a 'snoek run' the fishing harbours leap into life, as they did on this day. I could have sketched in Kalk Bay harbour for hours (these are sketches done there last year) - the great characters, throwing fish around, cleaning, filleting, shouting, (the language is as blue as the sea and sky) selling, seagulls and seals milling round snatching at morsels tossed aside - but had to settle for a sketch from 'Kalkies' café where we enjoyed a delicious meal of, naturally, fresh snoek. 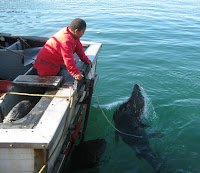 I have a feeling that if I did sketch the people there might be a 'fee' asked, as for everything else including chatting to this little boy who was playing with the seals with a bag on a rope so we could get photos!
I posted these two sketches on Urban Sketchers as the original line drawings... I have an almost uncontrollable urge to 'colour-in' later, and often wonder if they would be better just left as they were.
Katherine asked how I carry all my supplies, which at the moment is in a big squarish handbag, with the pens and waterbrush standing upright in a side pocket, and sketchbook all easy to whip out. I don't often have the time and space to add colour on site, though I always have a little Cotman palette in my bag in case. If I'm really hell-bent on a few hours solid sketching I take a simple school backpack with more paints and brushes, small water jars, cloths, a mixing palette and maybe some nicer watercolour paper folded into an accordian sketchbook, and sometimes a little folding stool. My latest sketchbook is a square 'Seawhite of Brighton' one from London Graphic Center - it was a moleskine until recently. Neither perfect for 'good' watercolour technique, but the paper holds up well to a bit of washing and scrubbing. I'll take a picture soon. This all undergoes constant review, so any tips for more efficient sketching are welcome.
Posted by Cathy Gatland at 5:03 PM

Gosh, Cathy, you have been busy! I see you've not lost your touch. I really love the painting of the boats through the window... really grabs my attention. Good for you on the oil painting of the shells to donate- you're a kind, caring person. Could use a lot more like you in the world :-)

Wow Cathy, these are awesome! And the weather has been pretty good lately. Recognised Simonstown immediately!

I Cathy, I really enjoyed your sketches of your trip. I am sorry I have been out of touch and promised myself I would take the time to enjoy your blog today. I did!

Thanks Teresa, and Liz - I certainly envied you Capetonians during those two idyllic days... but not if the wind had blown like it sometimes can! ;)
Thank you Martine
Pat - don't be sorry, but good to see you here again, thank you.

What is a snoek like? Small? white? I've never heard of that type of fish.

Thanks Sue - snoek is quite big, can grow up to 2 metres, but these were about half that (I drew one, kind of, being thrown into an SUV on the right side of the sketch) - white and brown flesh with lots of long bones. In Australia and NZ its called barracouta (not barracuda) - and is related to mackerel. It's traditionally eaten braaied over coals, or grilled, baked, fried, smoked, salted or in paté... yum!

It sound delicious. The Aussie name is familiar, so I probably ate it there way-back-when.

Oh, your blog is always a delight--these are awesome! I feel inspired to pick up my paints!

Cathy...... I'm so sorry for not popping in earlier but thank you so much for allowing me to take a tour around the Cape with you. It was a real treat! Love your sketches of all the little places you stopped at and the narrative that goes with each sketch. You have great patience!

Your sketches sums up a life I know so well, Cathy. Just a question: where do you advertise and sell your work?

Marie, to be honest, I don't really... I have a friend who used to exhibit and sell some paintings for me in group exhibitions, but proper marketing and selling is still something that I intend doing sometime in the future (when I'm a real artist!?)

Wait till they all come out in a book! The originals will be valuable, truly!